Residents of Brookland Manor are protesting a move by the owners of the housing complex to modernize apartments by making them smaller, more expensive and developing more of them. They fear the plans will lead to the displacement of large families and low-income tenants.

“They are pushing people out … It’s not fair,” Leonora Holloman said in an interview. Holloman moved to Brookland Manor six years ago, where she lives with her daughter and three grandchildren in a four-bedroom apartment. She was one of roughly 100 protestors who demonstrated in front of the Wilson Building at the beginning of a Feb. 23 zoning hearing.

MidCity Financial Corp., owners of Brookland Manor, envision a more modern complex with state of the art amenities. It will be renamed Brentwood Village.

“The final product will be a 20-plus-acre mixed-use, mixed-income neighborhood with community-serving retail, green space and more,” according to a statement provided to Street Sense by Maier & Warner, a Rockville-based public relations firm representing MidCity.

The complex, which has just over 500 units, is mainly occupied by low-income residents. Approximately 100 of the units are four and five-bedroom apartments. The redevelopment plan does not include any units that have more than three bedrooms, according to a tenant organizer who has participated in the hearings thus far. 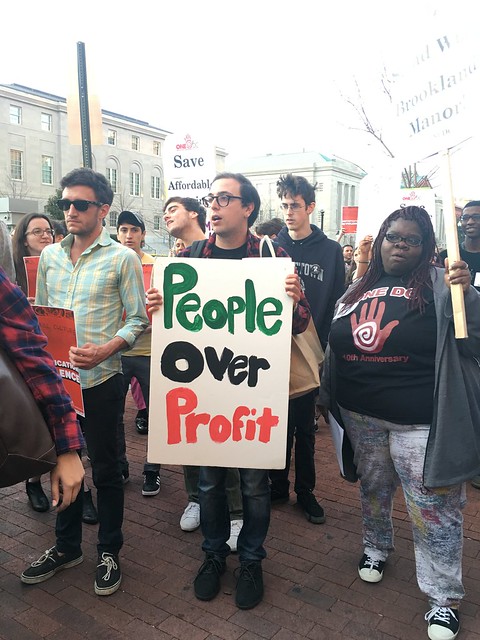 On Feb.23, Brookland Manor residents and other demonstrators gather outside of a zoning hearing to protest being pushed out of their homes. | Photo by Ashley Clarke

MidCity agreed to keep some of the units “affordable” for the residents whose rents is subsidized by the government. But tenants are fearful that with the smaller apartment will come a heftier rent, which would force them out of their community.

“Two years ago when they first submitted a zoning application, there were just 13 Brookland Manor families that would require units larger than three bedrooms based on the appropriate occupancy standard,” Maier & Warner wrote in an email to Street Sense. When MidCity submitted its zoning application in 2014, it committed to work with the families who live in large apartments at Brookland Manor. To allow time for this, MidCity will maintain large units at the site for at least six years.

“Those options include building more large units than are currently in the plan or offering multiple units, such as moving a grandparent to the senior building. …  MidCity is looking into many different types of first time home ownership incentives for current residents,” Maier & Warner said.

This has not assuaged the tenants’ anxieties.

Holloman said that without larger apartments at Brookland Manor, her family will have to find another home if they want to continue living together. “I like my community. It’s convenient. Convenient to the subway. You can walk to the shops if you’re so inclined to.” she said.

The company’s statement says it intends to build a 200-unit “senior Section 8 building and multifamily building” on site to house existing residents, before demolition of Brookland Manor would begin. Information on individual unit costs or size has not yet been made available. 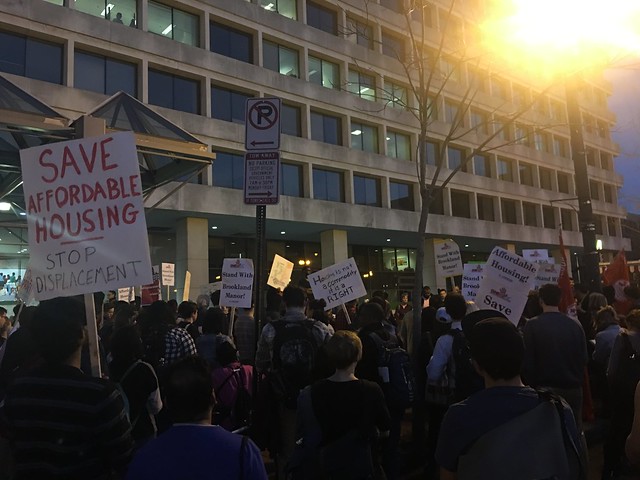 Yasmina Mrabet, a community organizer for Organizing Neighborhood Equity D.C., said tenants and organizers have been unable to get MidCity to release exact numbers of multi-generational families living in Brookland Manor who might be displace, outside of their assessment that only 13 families will need apartments larger than three bedrooms based on their on standards.

“There are many grandparents taking care of grandchildren. There are people who have grown up there, raised there kids there,” Mrabet said.

The Brookland Manor/Brentwood Village neighborhood association has filed a discrimination lawsuit against MidCity. “Family’s are supposed to be a protected class,” Mrabet said.

ONE DC, who helped organize the demonstration on Feb. 23, asked current residents to tell their stories. Many expressed pride in their community. 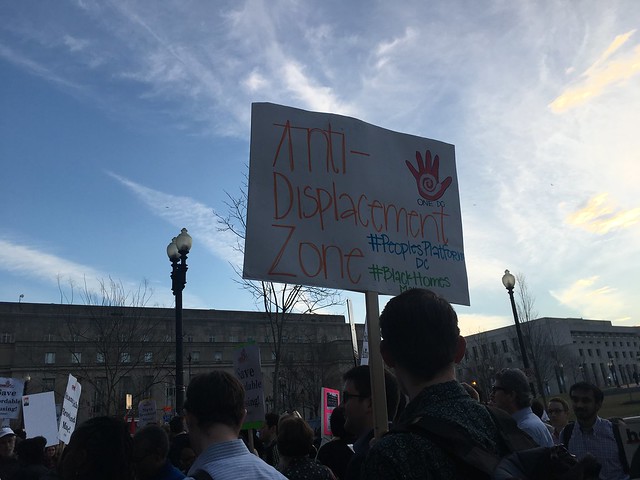 MidCity said that there have been misconceptions about the elimination of affordable housing options. But tenants feel the developer has not been transparent enough.

No pricing information for the new development has been released. Without it, tenants have begun to worry that the developer’s definition of “affordable” might be very different from what’s actually affordable for current residents. The neighborhood association’s attorney, Will Merrifield, asked MidCity what the statement “qualified tenants will be able to return after the development” meant during cross-examination at the Feb. 23 hearing. MidCity representatives declined to answer saying his specific questions were not meant to be asked during that particular motion.

“Our children are suffering”, said Yvonne Johnson in an interview, another Brookland Manor resident. “If you could see the depression that has set in with our little ones you wouldn’t believe it. They’re afraid that when they come home from school, that they’ll have no place to live.”

Johnson said she was born in D.C. and has no plans on moving. She has worked in the school system for 20 years and has never seen this kind of anxiety from younger residents before. Her granddaughter is a student at George Mason University and on top of worrying about her grades, she worries that her family will not have a place to live, according to Johnson.

“This has got to stop in this city,” Johnson said, referencing displacement caused by redevelopment. “This city owes us. We stayed when it was burning. We stayed, no one else stayed. We did.” 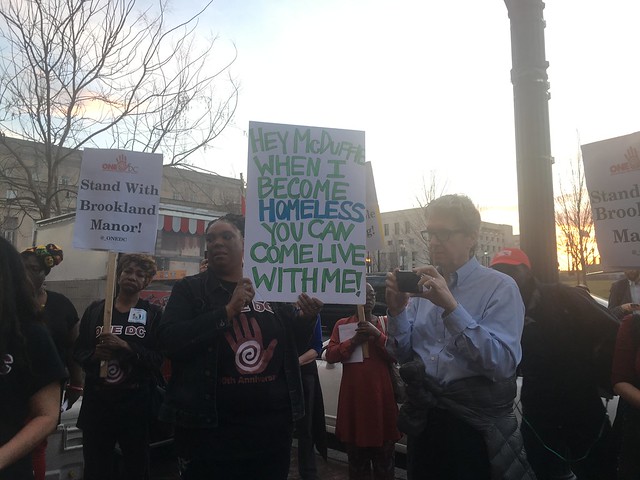 Linda Leaks, a ONE DC member and self-described “long-time organizer for housing justice” also spoke at the protest.

“It is so great to see so many people out here raising your voices and shouting out loud to those people in there who are making decisions.” Leeks said. “I am happy to see you fighting for your rights. Fighting for your homes!”

Leeks says she will not allow policymakers and big developers to push residents out of their housing. She urged the crowd to hold government officials accountable for their actions.

Protestors specifically targeted Ward 5 Councilmember Kenyan McDuffie, who represents the neighborhood where Brookland Manor is located. One woman, tenant Serita El Amin, held a sign that read, “HEY McDUFFIE WHEN I BECOME HOMELESS YOU CAN COME LIVE WITH ME!”.

Amin said this was a fight for the community’s rights, a community where she had raised her own children as well as looked after those of her neighbors. “If you give me a chance I’ll raise your kids there,” El Amin said. “That’s who we are at Brookland Manor.”

The next zoning hearing related to the project is scheduled for Thursday, March 16.

This story has been updated to include details regarding the number of grandfamilies at Brookland Manor and a statement provided by Mid-City Financial that was not made available before Street Sense went to press.