On July 21, in the basement of St. Augustine Catholic Church, Antwan  Williams, 19, Willis Little, 19, and Burke Davis, 20, are hard at work. The walls of their workspace are covered in poster-sized sheets of paper, the table with notebooks. They are planning the next community meeting for Ivy City — a tour of the neighborhood for the following afternoon — and organizing Empower D.C.’s involvement for Ivy City Day. The event will be hosted by Ivy City’s three local churches, something Empower D.C. founder Parisa Norouzi said has not happened before.

Williams, Little, and Davis are trying to organize a basketball tournament during Ivy City Day, a task made difficult with the neighborhood’s lack of public space. They are planning to ask one of the churches if they can set up hoops in their parking lot. 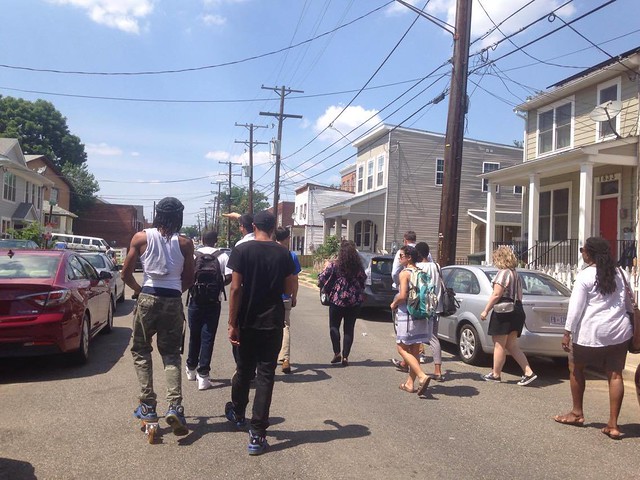 Ivy City is a 1.7 square mile predominately Black neighborhood in Northeast D.C., a place the three have called home for years. Growing up, all three young men remember putting milk cartons on poles to play basketball.  All the while, Crummell School stood boarded up and fenced off, warding off residents with no trespassing signs. The school’s surrounding yard space became their only option, trespassing or not.

“It was the only place to play,” Williams said in an interview with Street Sense, “if you start hanging out on the streets and sidewalks, police start harassing you for occupying the space. It stirs up animosity.”

For Davis, the most important aspect of Crummell’s reopening is creating a place for Ivy City’s children to play, along with shady trees for elderly residents to rest under. “We wanted to be allowed into the school, it felt weird that we weren’t allowed in. We had to climb the gate,” Little said. 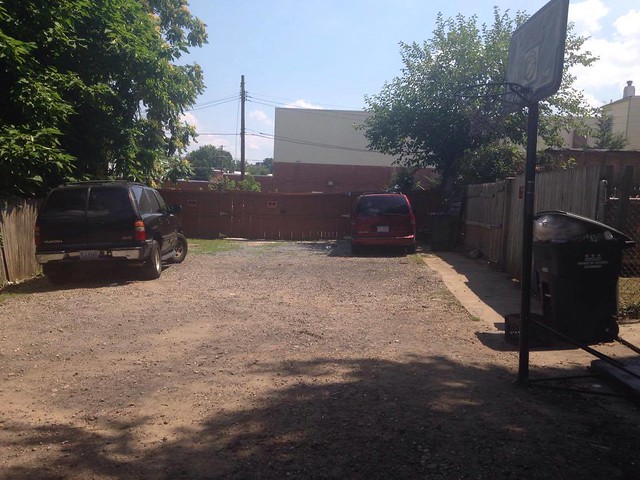 When the D.C. Office of the Deputy Mayor for Planning and Economic Development (DMPED) released a request for proposals, Empower D.C. immediately began working on their proposal. With a deadline of six weeks, Empower D.C. first went to the community, creating a survey to determine what residents wanted to see the space used for.

Little said the group separated, covering as many blocks as possible, knocking door-to-door. Participants in the survey had to be Ivy City residents. Ivy City residents who responded to the survey. Several responses received were discarded because they came from non-residents (Click to enlarge). Report data courtesy of New Majority Community Labs

Norouzi hasn’t seen the other two proposals, but as far as she knows, Empower D.C. is “the only group who engaged with the community.”

One of the other proposals come from Ivy City Partners LLC, a collaboration between StonebridgeCarras and The Jarvis Company. The third was submitted by CSG Urban Partners and Trammell Crow Company, one of the firms working on the redevelopment of McMillan Park, next to Howard University.

Ivy City Partners LLC is partnered with ProFish, an Ivy City restaurant which opened in February of 2016. Bill Jarvis of The Jarvis Company, said partnering with ProFIsh helped to connect Ivy City Partners with the needs of the community.

“Greg Casten, the co-owner of ProFish, has a lot of employees who live in Ivy City and is involved with the community and the ANC [Advisory Neighborhood Commission],” Jarvis said in an interview with Street Sense.

Trammell Crow and CSG Urban Partners were immediately unavailable to comment on their community engagement.

Sometime within the next several months, the city is expected to make a decision on these “community-first” proposals, according to Joaquin McPeek, the director of communications at DMPED. Last year, Crummell School became the second project to implement the Bowser Administration’s “Our RFP” program, which solicits community feedback ahead of soliciting developer proposals. 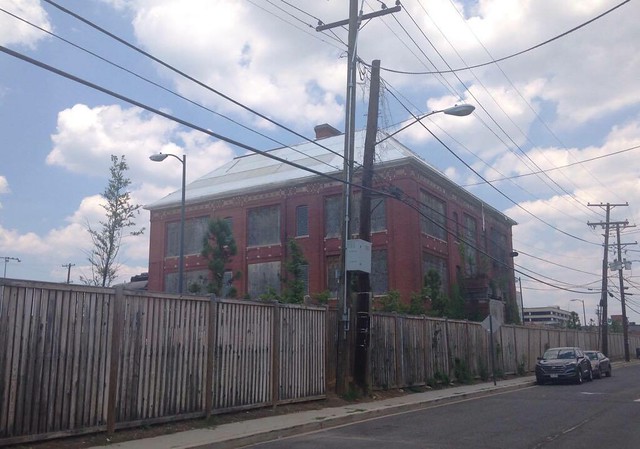 “The mayor wanted to make sure people’s voices were heard,” McPeek said. DMPED held three Our RFP meetings in Ivy City last year, attended by residents from every ward in the city, to ask what needs a new development at that location should strive to meet. This process of meeting the needs of the community highlights transparency and promotes dialogue, according to McPeek.

“We’re excited because, although the Crummell proposals are still under review, I can say that all of them really reflect the needs and desires of the community,” McPeek said. “The OurRFP process is working to make sure neighborhoods succeed.”

Davis, Little, and Williams have been working with Empower D.C. since winter, but Ivy City residents have been asking District government to reopen the historic Crummell School for decades. It was shuttered in the 1970s.

In 2012, Ivy City’s Advisory Neighborhood Commission (ANC), along with Empower D.C., fought legal battles against the Gray administration’s plan to develop Crummell’s parking lot into a bus depot. The community’s concern was not only preserving the history of Crummell, but also the adverse effects a bus depot would have on Ivy City’s already poor air quality. The bus depot was never opened, but the sting of the Gray administration’s plan still hits deep with the community. “They were waiting for Crummell to fall down so they could do whatever they wanted with it,” Little said in an interview.

The following day, Davis, Little and Williams showed their neighborhood to employees from Local Initiatives Support Corporation (LSC) and Building Community Workshop (BC), along with local artist Esther Iverem. LSC and BC are in the process of connecting artists to Ivy City and wanted anyone interested in creating art there to get a community perspective. The tour started on Central Street, stopped by Lewis W. Crowe Park and wound through residential areas.

In the over 90-degree heat, the group stopped several times so everyone could stand in what little shade was available. The Ivy City Market mural on Capitol Street is one of the few shady places in the area.

However, according to Williams, standing in the shade can prompt police questioning, There are also some trees across the street from the mural, but a police car was parked under them. 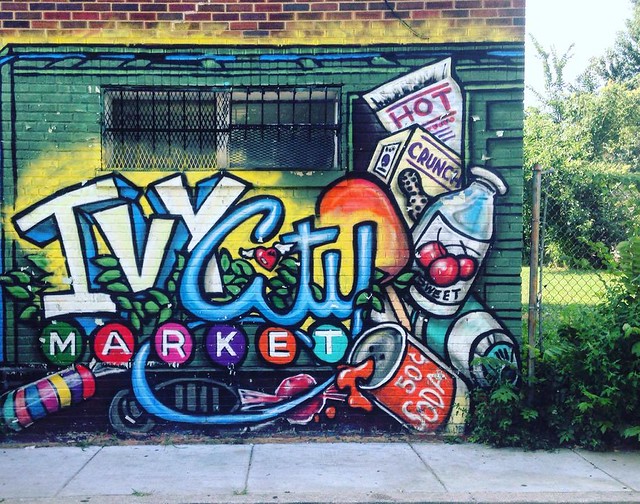 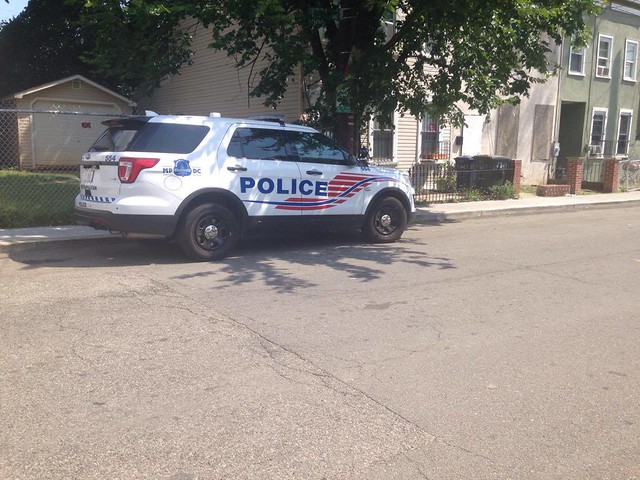 Davis, Little, and Williams showed the group the two local places to play basketball. One is a single hoop behind a row of houses in a gravel lot. The other is a half court in a fenced off row of townhouses. Davis said the man who owns the house lets them use the half court, sometimes bringing out Gatorade. Davis, Little, and Williams are hoping a basketball court will be included in the redevelopment of Crummell.

As the tour continued down the block, Williams pointed out the Youth Services Center, a juvenile detention center set back on a hill, looking over Gallaudet Street. “That’s the only plot in Ivy City with a full-sized court,” Davis said.

The group then made its way to Crummell, where Iverem asks if there’s a better angle to see the school. “You can see it through the entrance where the buses would have entered,” Williams said.

Little pointed out the black metal fence a few hundred feet away as an alternate vantage point. The group walked down Gallaudet, staring up at the school. “You come here, and you feel relaxed,” Williams said, looking up at Crummell. “It’s quiet.”

The group continued walking towards the historic Hecht Warehouse, which is a landmark on both the District’s Inventory of Historic Sites and the National Register of Historic Places.

As part of their fellowship with Empower D.C., Davis, Little, Williams, along with Tycho Briscoe, filmed a music video to address the need for a recreation center in the community. The video, released in June, was shot in Ivy City, and featured many of the neighborhood’s landmarks. The group attempted to include scenes of the warehouse, which was recently renovated to house several new businesses and apartment units. Williams said they asked to film inside the building. But according to Davis, they were asked to leave. A spokesperson for The Hecht Company Warehouse was not immediately available for comment.

As part of the same survey about uses of the Crummell School, Empower D.C. also asked residents if they had applied for jobs at the new businesses: the Nike Store, Mom’s Organic Market, Planet Fitness, Bikram Yoga, CrossFit, Galley or Ivy City Smokehouse. Of the forty people who answered the question, thirty-two said they “never heard back” and only two said they were hired. According to the survey, the Nike Store is the most popular new business, with 104 out of 152 respondents saying they shop there. Less than half of respondents frequented any of the other establishments.

Forty-seven percent of respondents agreed that “with changes in Ivy City, low-income residents will be forced out of the neighborhood.” Another thirty percent said they were unsure.

Despite this uncertainty, the survey found a majority of Ivy City residents are proud to call their neighborhood home. Rokia Hassanein contributed to this report.