On Jan. 21, Sophia Marjanovic weaved through the masses of women in pink knit hats, singing and beating a drum her father made, one that belonged to her son. “I want to bring an indigenous voice,” she said.  She is part of the Fort Peck Lakota tribe, the same Native American group fighting against construction of the Dakota Access Pipeline.

“I’m a survivor of domestic violence,” Marjanovic said. According to a 2016 Justice Department study, 4 in 5 Native American and Alaskan Native women have experienced violence: 56.1 percent experiencing sexual violence and 55.5 percent experiencing physical violence by an intimate partner. Due to a 1978 Supreme Court ruling, Tribal courts cannot try non-Native citizens for crimes committed against Native Americans. “There’s no justice for it,” she said.

Her story gets even more devastating. Marjanovic lost custody of her son over a year ago, because, despite her PhD. and job as a robotics instructor, she was told her abuser was better fit to parent him. “Because my Lakota heritage would alienate the child,” she said. She has been trying to regain custody, but to no avail. Although she had not planned to attend the women’s march initially, Marjanovic was nearby and decided to bring her voice and her story to the enormous gathering on the National Mall.

The organizers of the Women’s March on Washington secured a permit for 200,000 marchers; instead, more than half a million attended, filling the route and delaying the start of the march by over an hour. Attendees’ reasons for marching varied widely, from healthcare to immigration to LGBT rights. Almost all felt that they were not represented by the incoming administration, and the election had spurred them to take action both on Saturday and in their daily lives. 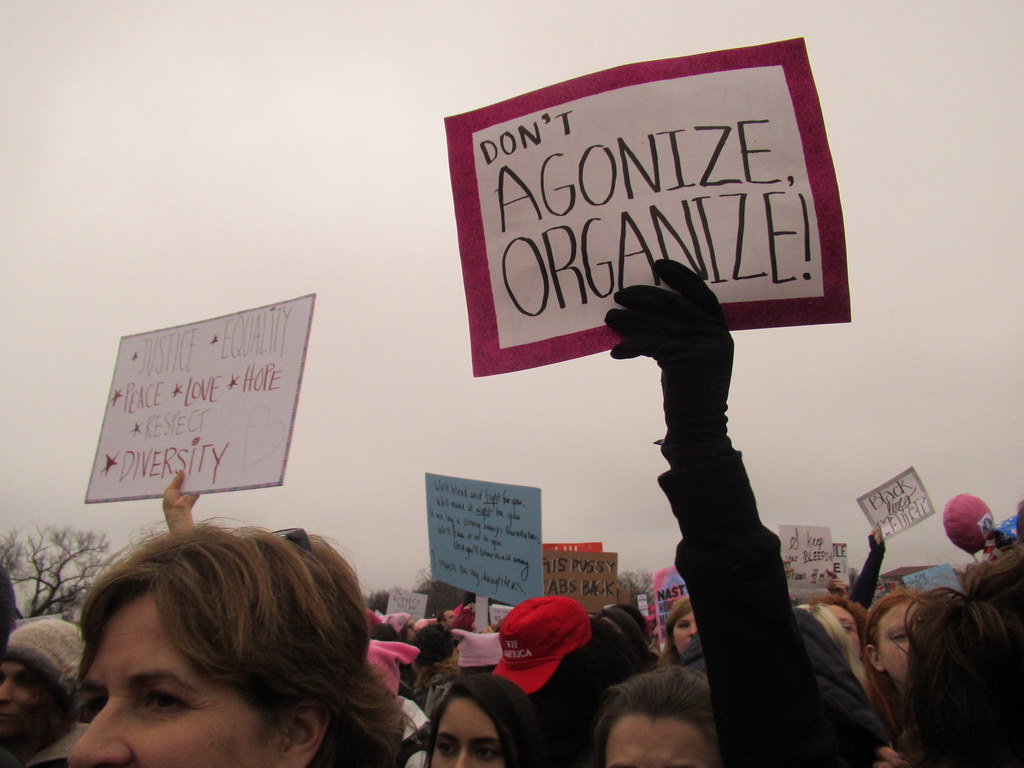 Severine Alford, 19, marched alone in honor of those who wanted to be there but could not. “Everyone else has work,” she said, although she was able to get the day off from her job at Barnes and Noble in Manassas.

Alford is nervous about climate change and about the repeal of the Affordable Care Act, since her disabled brother depends on medications made affordable by the law. She hoped that the march might change the president’s mind, but if not, that he saw the women and heard their concerns. “We are going to be loud and speak out against what he’s doing,” she said. “I don’t want my rights taken away.”

Susan Holliday from Maryland is also concerned about healthcare cuts. She works as a therapist with patients who have serious mental illnesses, including adults and children who have experienced sexual abuse or rape. “These are people who really need it,” Holliday said. Her patients can afford to see her because of Medicaid, and many are scared that their disability benefits will be cut.

Orthopedic surgeon Clyde Henderson, a veteran of civil rights marches who came with his daughter Frances, worries about his patients too. “People have to act locally,” said Frances Henderson. “They snuck up on us, that can’t be allowed to happen again.” 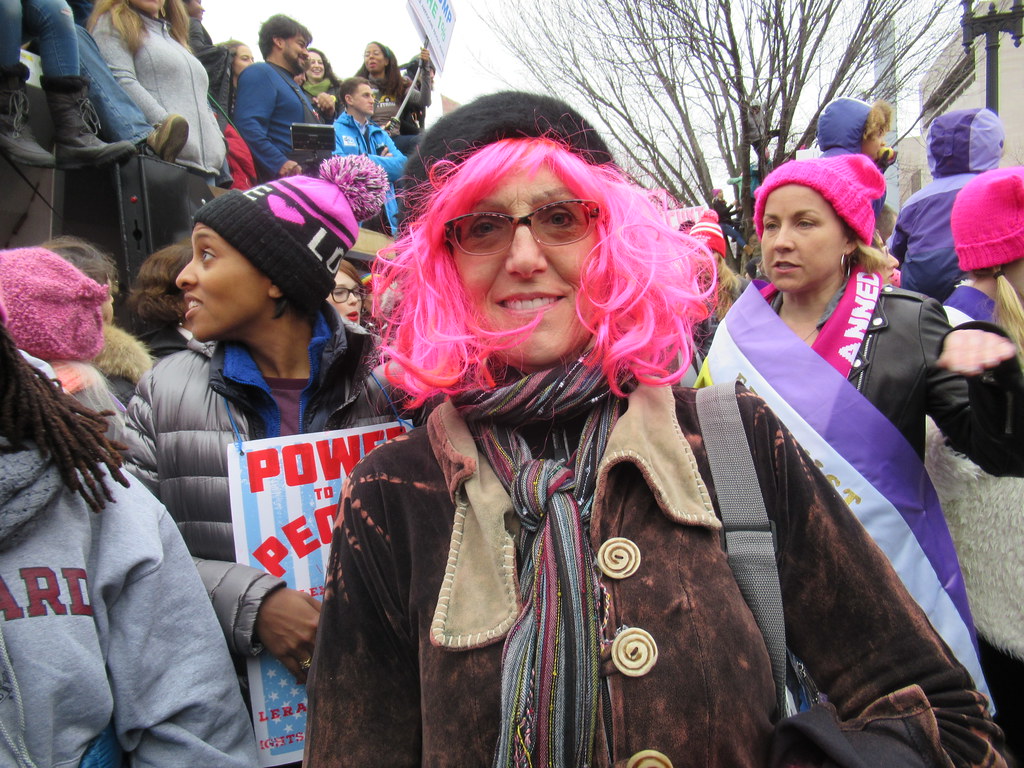 Ellie McGee, 17, attended the march with her mother and grandmother after flying in from Mount Desert Island, Maine. “I want to be able to marry who I want to marry,” she said. “I do not agree with anything Donald Trump stands for.” McGee despairs about the future of climate change, but hopes that people will notice the marches and take action.

Jerri Mayer brought her 15-year-old son with her from Choctaw, Oklahoma. “I’m teaching him to be a liberal feminist,” she said. “It’ll be this generation that changes.” She was awed by the different generations and diversity represented at the march.

Mayer said that when she arrived at Dulles International Airport on Friday morning, she saw three police officers booing the inauguration, which was playing on one of the TVs. To her, this represents the widespread opposition to President Trump, a feeling illustrated by marchers’ chant “We are the popular vote.” 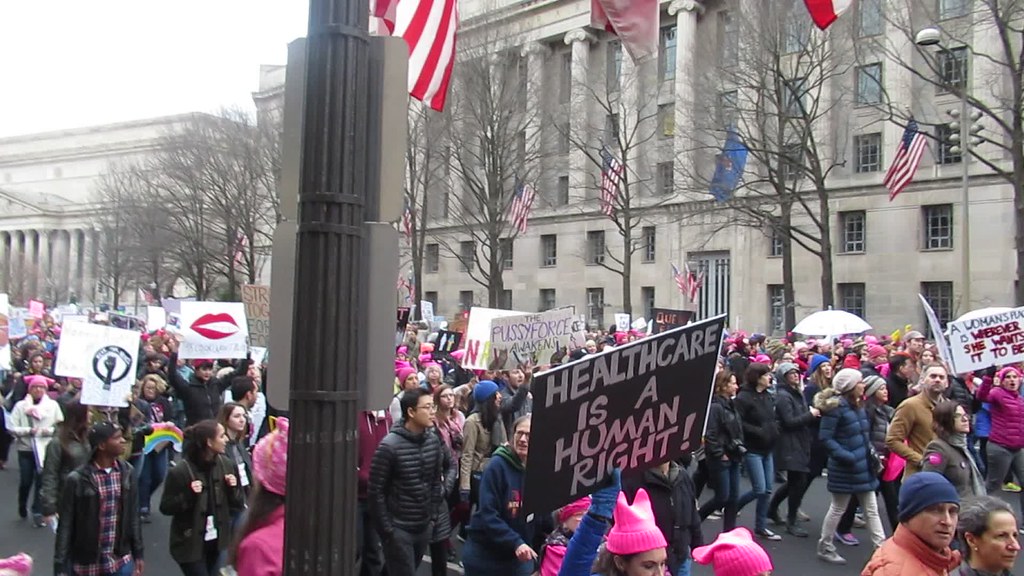 Karla Ortiz also brought her son, who is almost three years old, so that she will be able to tell him that he was present for a historical moment.

While she cares about healthcare and access to contraception, uncertainty over immigration status looms the largest. Ortiz immigrated to the U.S. with her parents from Oaxaca, Mexico and benefitted from Deferred Action for Childhood Arrivals (DACA). Now, she worries her immigration status could change at any moment. “We grew up here, we don’t know much from our country,” Ortiz said.

Her sign, which read “Dreamers present,” was meant to show that immigrants like her are civically engaged. “Many don’t count as citizens, but we’re a part of it,” she said.  She hopes for an easier path to citizenship so that people like her parents will not have to risk death crossing the border.

Nicole Santos was appalled by the rhetoric referring to immigrants throughout the 2016 campaign, since she is a child of Portuguese immigrants.

“I think it’s important to get our voice heard quickly and frequently,” she said. “It’s definitely not the end, just the first [protest] of Trump’s presidency.”

“Sister marches” occurred in 50 U.S. states, the District of Columbia, Puerto Rico and on all seven continents.

According to the Women’s March on Washington website (womensmarch.com), more than 4.8 million individuals participated in 673 marches.

The most-attended march was in the District. In New York City, 400,000 participated and in San Francisco, there were an estimated 150,000 – 200,000 marchers. At the other end of the spectrum, 24 people assembled in Corpus Christi, Texas; 12 gathered in Bainbridge Island, Washington; and 3 protesters got together in Appleton, Wisconsin.

Among the smaller overseas gatherings, there were two protests in Antarctica where 95 individuals assembled at McMurdo Station and 30 met up at Paradise Harbor; 30 protestors gathered in Beirut; and 50 attended the protest in Madrid, Spain.

An annotated list of sister marches and approximate attendance is being maintained at https://en.wikipedia.org/wiki/2017_Women’s_March.