“Father’s Day:” Pookanu provides a peek into his world on a brand new album

Ron Dudley had warned his cousin Keisha Walters multiple times about the man she was living with. Unable to shake his bad feeling about the guy, Dudley stopped visiting their apartment. Until recently.

“Hey cuz, call me when you get this. I’ve been waiting to hear from you,” Dudley texted his cousin on a Thursday night last October.

The cousins made plans to see each other Friday night, but Dudley still couldn’t bring himself to go over there. The next morning, his father called with shocking news: Walters, her daughter Shaneka and their friend had been shot dead by the man living with them.

Stunned by the shootings, Dudley turned to his music to cope. A longtime hip-hop artist, Dudley said Walters was his biggest fan.

On his song “God’s Work,” Dudley raps about the incident: “I just wanna thank the Lord I’m still here / ‘Cause I could’ve died with my cousins last year.”

Even before the killings, there was a lot of chaos — and intermittent joy — in Dudley’s life. Three years ago, he lost his home.

Ron’s son Ricardo was born a few months later. With Ricardo’s mother struggling with drug addiction, her parents allow Dudley to stay with them while they help look after his son.

Lorna Rice-Lucas, Ricardo’s grandmother, is 64 years old, and she said the family’s situation is especially stressful given her old age. Yet, she plays Dudley’s music to Ricardo almost every day.

“Everybody hits up and down points in life,” Rice-Lucas said. “His music covers all that.”

“Father’s Day,” Dudley’s new album released on June 14, details his search for God and peace of mind through these ups and downs.

“I always dove into my personal life in my music, but this was the hardest one to do,” said Dudley, who raps using the name Pookanu.

Dudley has been involved in the D.C. music scene for years, performing at locations such as the Pure Lounge, State of the Union Nightclub, Busboys and Poets, and Street Sense’s annual gala. His performances were met with praise, inspiring Dudley to make “Father’s Day” his first album for online sale.

He recorded it at Listen Vision Studios, a well-known rap studio founded by Jeremy Beaver in 1998. Beaver, who first collaborated with Dudley in 2000, said the rapper’s talent was evident the first day he came to the studio.

“He’s polished his sound,” Beaver said. “In terms of having a unique voice, his writing, his delivery, he’s really set himself apart.”

Dudley said his music is always borne out of life experiences. Amid his unstable living situation, the mantra “homeless, not helpless” keeps life in perspective for Dudley.

“When you’re homeless, you have kids, you have bills, you have family, friends, responsibilities,” Dudley said. “The only thing separating you from the rest of the world is a lease.”

With his album dropping just in time for Father’s Day, Dudley, a Street Sense vendor and artist, agreed to an interview: 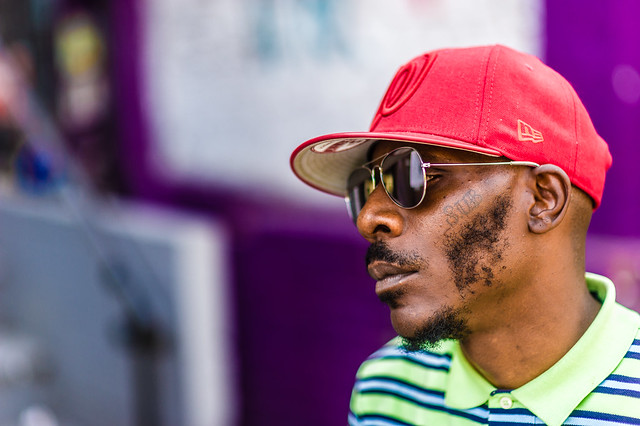 Ron Dudley, who raps as Pookanu, stands outside Listen Vision Studios, where he recorded his upcoming album, “Father’s Day.” Dudley, a Street Sense vendor and artist the last three years, said he recognizes around 500 names and faces in the area where he sells papers. Photo by Rodney Choice

Street Sense: When did you fall in love with rap?

Pookanu: At a young age. I was real young when I first started liking rap. I think it was already in me. I’ve been doing it for so long, like since I was a kid. Even before I listened to it, seeing old videos on TV like when your mother or grandmother leave, they leave the TV on, and I’m like, ‘I can do that!’ As long as I could remember, I had music in my brain. First it was in my head, like I would listen to songs but I would make songs in my head to their songs.

Your daughter Brooke has been featured on a few of your songs. When did you discover her talent?

Pookanu: She’s 12 now, but she did an album with me when she was five or six years old. She was with me so much when I was writing, she knew songs before I even recorded them. So that was amazing. She has the touch. Even though I wrote most of the songs, she did them in the studio. I know adults who haven’t even done that. Like, they didn’t come as far as to the studio, but I have a six-year-old in the studio doing 10, 12 songs? That was amazing. Another reason that she ended up in the studio with me so much, because the people that’s supposed to be on the song didn’t show up. So I was like, ‘Alright, boom.’ I put her on the song… it was crazy. I just had a beat playing one day, and she did a speech. I didn’t even know it was a Malcolm X speech until somebody told me. It was a speech she did in school in front of the whole school. It went with the beat. That was her first one, and after that, she was in the studio with me all the time.

Does she still rap with you?

Pookanu: No, but she could. Her mother’s a teacher, her grandmother’s a teacher, so she’s really into school — an honor roll student. She still don’t know how we did that. I don’t know if I was spiritually guided when we did all that, but sometimes I think, “How did we do this?” She knows every song that we wrote, so if somebody was to tell her to come on and do this, she’d be ready.

How do you think you’ve developed over the years as a rapper?

What kind of message are you trying to send with your music? Who are you making your music for?

Pookanu: I make my music for everybody. I don’t care who you are, what color, where you’re from, what religion, if you’re tall, short, skinny, fat. It doesn’t matter. I just make it for you, because it’s life. True or false, A or B, up or down. My music, it’s really to make you think, and when you think, hopefully it can change your life for the better.

Several of your songs and poems focus on your mom. What kind of influence did she have throughout your life?

Pookanu: My mother, she died when I was young. And I remember when she died: where I was, my situation. I was from D.C. Me and my sister got taken away and put in a foster home because she was addicted to drugs, so we got sent to Southern Maryland, St. Mary’s County. When she died, I was in the country, a young guy.

I remember I had Chicken Pox, and there was so much snow that the school was shut down. My little sister, she’s sitting there, and when the phone rings, I knew it was my mother. I don’t know how I knew it, the same way I don’t know how I remember 500 names and faces of customers I sell my paper to. But I knew it was her. When it rang, they were like, ‘Your mother dead.’ My mom had just came down to the country that summer to see us. At least she tried to get help before she died, but drugs are a strong thing.

Moving was a good thing, too, because I figure if I was raised all my life in D.C., I might be dead or locked up. In the country, I worked for everything. I did things you wouldn’t believe: cut tobacco, bailed hay, used to get up in the morning to catch crabs. I always had a good work ethic, that’s what the country taught me.

How did you get the name “Pookanu?”

Pookanu: My grandmother gave it to me when I was a baby. People think I’m part-Indian or something, but nah, it was just a name my grandmother gave me. When I first started rapping, I was everything, had so many different rap names, but they just didn’t fit me. I was like, ‘I’m just gonna go with the name everyone calls me: Pookanu.’

In the country growing up, I was Ron, but in the city, I was Pookanu. When the people in the country heard the name, they laughed, like ‘What is a Pookanu?!’ All my life, I was embarrassed as Pookanu, but once I started doing music, I realized that’s why I got this name. When people hear it, they talk about it. I know they’re gonna be curious.

When did you get involved with Street Sense? What kind of impact has it had on your life since then?

Pookanu: I started about three years ago. I had lost my place. I was going through things in life. Walking one day, I was real upset and went past a Street Sense vendor I always support. She said she felt my pain and that she just saw a look on me. Then she stopped and talked to me for about 45 minutes. In 45 minutes to about an hour, she made 75 bucks. She said I should get with Street Sense to get back on my feet. A month later, I was a permanent vendor. Once I started, I never looked back, because I said once I do it, I’m gonna do it. It helped me a lot. I haven’t gotten housing yet but it kept me motivated mentally and spiritually. I always said I would [distribute Street Sense] for free. It just showed me that most people in this world are good. It changed my life and kept my dream alive just by being in the paper every two weeks, writing a poem, writing a verse, writing a story. ■

This interview has been edited and condensed for clarity. Listen to the latest episode of our Sounds From the Street podcast to hear more about Dudley’s story. You may also enjoy his interview with the band Prophets of Rage last fall.