I know I heard them. They spoke quite eloquently.

I am certain I saw them. In fact, I took pictures. They were there!

But where are they now? They advocated so well on behalf of the displaced that it seemed they were themselves without domicile.

Marching down from Luther Place to Freedom Plaza, they made their presence known to the rush hour commuter as well as the visiting passersby.

Fifty or more of them in the streets, the voluminous cries of “Housing is a Human Right! Fight Fight, Fight!”

So resonant that it captured the attention of travelers afoot and drivers that blew their horns in rhythmic accompaniment. This was no figment of my imagination!

Even more were waiting for us at the tent. There were names of agencies bandied about and solutions tossed around. Numbers of surviving populations tallied and even represented.

There was a crowd when I got there!

There was a crowd when dinner was served!

I turned my back for a minute (okay, it was a little longer), but when next I looked they had vanished. The number of concerned citizens, advocates and even the well-represented press had dropped, like I only wish the number of non-domiciled D.C. residents would. For a bit, even I was gone. 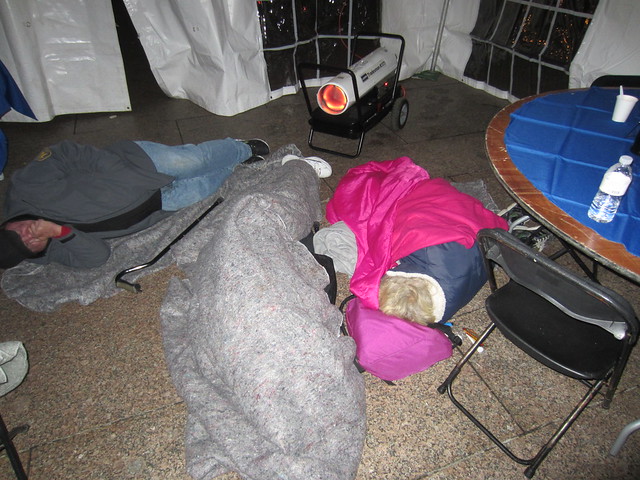 Plenty of room near the heater during the sparsley-populated sleep-out. | Photo by Ken Martin

By 11 p.m., the count in that oversized tent, hired to accommodate over a hundred, contained less than twenty. At midnight. The count was 15. And there it stayed until I left for a comfort break at 6 a.m.

So where did they go? These folks charged up and mournful of D.C.’s dead and walking wounded…

These overnight-challenged warriors that were to stay out in the “cold” one night, like the homeless do nightly without option. They were to serve as inspirations for the apathetic neighbors that disregard or minimize the plight of the ignorable.

Where did they go?