Vicky Williams served as a nurse during the Iraq War.

But when she returned home, she became homeless.

She didn’t let hardship defeat her. She fought to get back on her feet. Then she helped others. She used her experience to advocate for fellow veterans, particularly female veterans struggling to overcome homelessness and other problems.

Williams, 44, is now a peer support counselor at the District’s Veterans Affairs Medical Center.
She was recently honored for her efforts to help and secure housing for needy veterans across the city by harnessing the resources of the multi-agency Veterans NOW initiative, which has set a goal of ending veteran homelessness in the District by 2015.

But it was Kevin Morton, the District of Columbia Housing Authority’s representative to the Veterans NOW initiative, who summed up the passionate spirit Williams brings to her work.

“She’s an advocate that if you get on her bad side, you better watch out,” he said. “But she has a heart to save every veteran on the street and that’s what she does.”

Williams beamed as she accepted the praise. “To go from having nothing to something, there are no words to describe it,” said Williams. She thanked those who have helped her mentally and physically along the way.

Williams secured permanent housing in 2011, enrolled in college in 2013 and was employed the same year by the VA Medical Center. She’s working on a master’s degree in social work.

Williams said her experiences with homelessness gave her insights into challenges facing a system designed to help returning vets.

“I noticed a lot of the information that was needed to move forward was missing,” Williams said. “As a female homeless vet, I noticed there were no benefits and there was a lack of funding.”

Williams took it upon herself to go to the Secretary of Veterans Affairs and discuss what was needed.

Since then, she has had the satisfaction of seeing many of her recommendations become reality. She has also seen many fellow veterans housed. Those efforts have been enhanced by Veterans NOW, a local initiative started in 2013 and comprised of the District of Columbia Housing Authority, the U.S. Department of Veterans Affairs, the Office of D.C. Veteran Affairs, the Community Partnership, Miriam’s KItchen and other government and nonprofit organizations.

The Veterans Now event on Feb. 27 celebrated veterans and offered a forum for discussing the challenges and solutions for ending chronic homelessness.

But advocates also had much to celebrate. 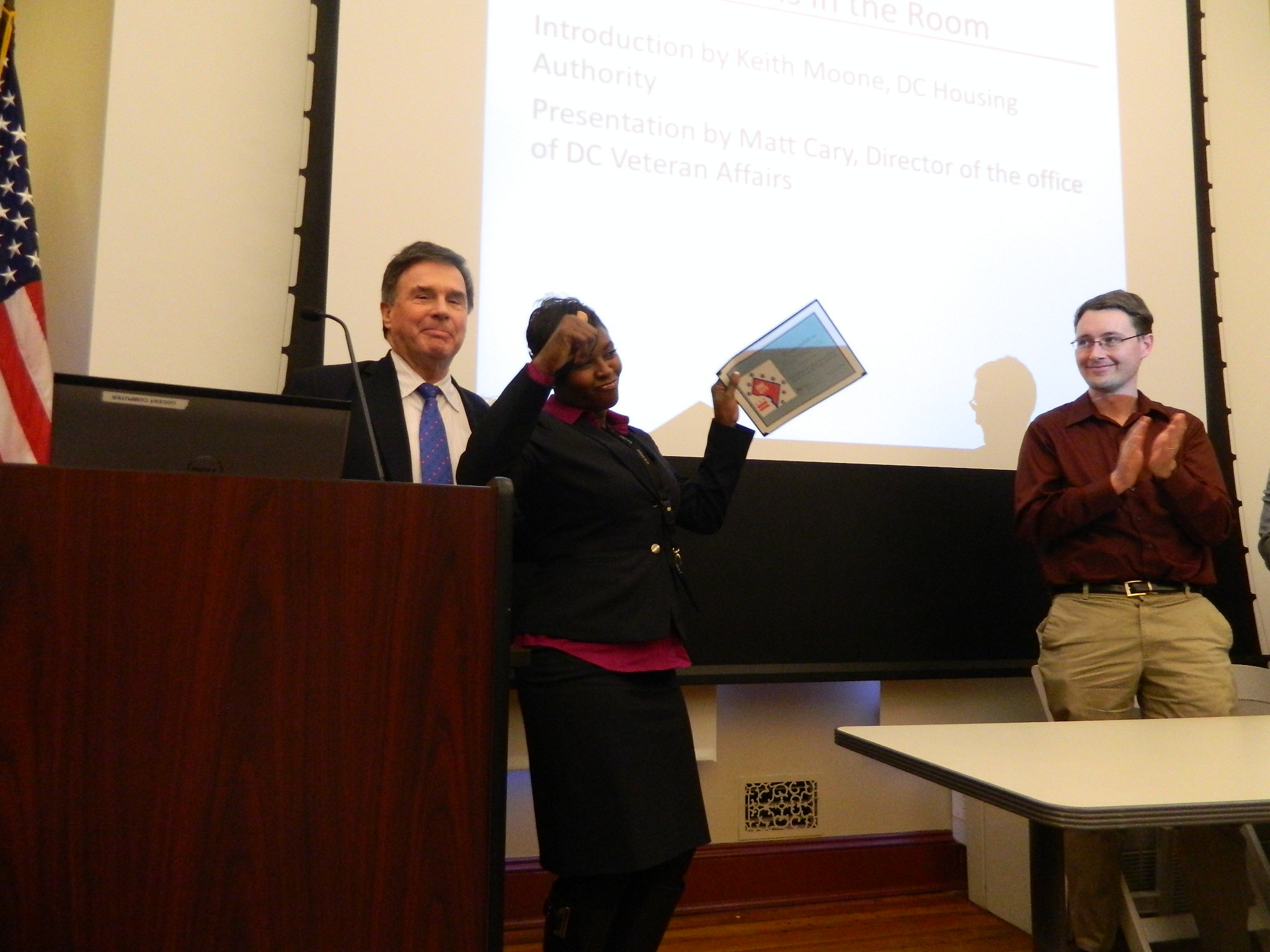 From August through November 2013, members of the Veterans NOW team housed 207 veterans, nearly achieving the overall goal of housing 225 veterans during that period. Veterans NOW is entering the final month of a second 100-day campaign, with a fresh goal of housing another 190 vets. Speakers at the Veterans Now event made clear that none of the ongoing work could be done without the cooperation of many public and private partners.

D.C. Housing Authority has tapped into a network of landlords to find available units and get them inspected and ready for occupancy. The U.S. Department of Veterans Affairs helped identify vets in need and streamline the process of signing leases. Furniture donations have come from the Home Depot Foundation. Veterans Affairs Supportive Housing Vouchers have helped with the rent.

The Veterans NOW team has set its sights upon fostering even partnerships with landlords and getting more groups involved.

Matt Cary praised D.C. Mayor Vincent Gray’s decision to set aside $187 million for the preservation and construction of affordable housing. Beyond housing, Veterans NOW is also working to get veterans help with medical, dental and mental health care, as well as with education, job training and financial literacy.

Williams has a new perspective on all of these challenges and potential solutions now that she has a home and is part of a larger system helping homeless veterans. “Being in the VA, I see a lot more than I did before,” she said. “I can relate to some of the things that were done, were being done, and … not being done.”

Williams, advocating for women’s benefits, has fought the misperception that homeless veterans are always men. She’s pushed to ensure women are compensated for serving their country. The VA Medical Center has done more to provide services for women veterans such as mental health services as well as health care services.

“We want to continue to fight, strive, and do everything that we can do,” Williams said.