Two films about homelessness debuted at the Smithsonian National Museum of the American Indian in November 2016. Producer Sterlin Harjo premiered “Mekko,” meaning “Chief,” and the Street Sense Film Co-op screened the film “Who Should I Be Grateful To?”

Both directors were invited to the stage afterward for a Q&A with the audience. Ten months out of the year, the museum showcases a dinner and feature-length film series. The program is managed by Melissa H. Bisagni, who was aided by intern Torell Taylor during our experience.

“Mekko” was about a man who was imprisoned for nineteen years. When he was released, he took refuge with a mixed group of American Indian people in experiencing homelessness in Oklahoma. Within the group was a shape shifter, or “witch”, that bullied and abused homeless people. He wasn’t even homeless, yet enjoyed intimidating, harassing and killing homeless people when confronted with views that were different from his own.

“Who Should I Be Grateful To?” depicted the controlling and abusive attitudes I’ve felt from government employees that say they are helping me. I believe they misuse their authority against the homeless for other purposes than that which they were hired to accomplish. This makes it extremely hard to heal, recover and move towards normality.

While each was unique, both films conveyed how non-homeless individuals perpetrate unprovoked violence against people on the street. These people target others experiencing homelessness just for the “fun” of it and their predatory actions often lead to physical, emotional, sociological and spiritual impairments — if not death.  According to a 2016 report by the National Coalition for the Homeless, since 1999 there have been 428 confirmed lethal attacks against homeless people in the United States. That’s out of a total 1,635 hate crimes against homeless people, which include being harassed, kicked, set on fire, beaten or worse. The report only accounts for crimes committed by housed individuals.

It is hard to imagine that people with homes would commit such brutal acts of violence against the most vulnerable people on the planet. But they do, daily. During the Q&A, both filmmakers agreed that there is a spiritual battle that follows homeless people on the streets. Whether they are confronted by evil witches or demons, ultimately it is left up to each homeless individual how they will respond to the forces of darkness. Not only do homeless people make daily survival decisions, but they must also make decision on how they will protect their spirits. 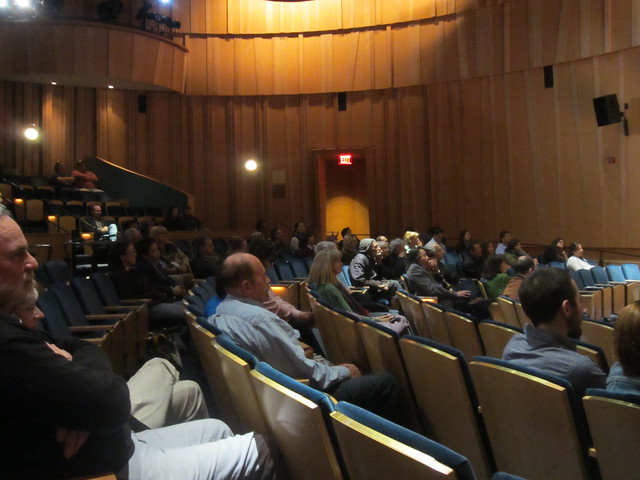 Street Sense artist/vendor screens her documentary “Who Should I Be Grateful Too?” at the Smithsonian National Museum of the American Indian ahead of native filmmaker Sterlin Harjo’s work “Mekko.” | Photo by Ken Martin

Days before the screening, Melissa invited both Street Sense Event Manager Dani Gilmour and myself to visit the museum’s Cultural Resources Center, where most of the museum’s collections are housed off display. We were given a tour by Sylvanus Paul of the Navajo Nation. Some of the highlights were Navajo basket that were older than anything else we viewed and Inuit parkas. The generosity that Melissa showed to Street Sense was an honor. I felt privileged to be a part of the museum’s Native American Heritage Month activities and will forever be grateful for the friendship that emerged. Thank you Melissa and thank you Smithsonian National Museum of the American Indian for providing the opportunity to discuss and combat a very unpopular topic: violence against the homeless.

How can we as a country better address these major concerns? Through films, forums, education and dialogue. Ignoring the topic or being silent about violence against the homeless doesn’t make it go away. It just festers and spins further out of control. This very dark issue demands our attention and exposing people to these issues helps prevent incidents that injure homeless people beyond repair, or result in the loss of their lives.

Both films called the viewers to action. I pray that we will all respond sensibly, responsibly and maturely.