With the mainstream media’s take on black history, we often tend to forget the here and now as we reflect on the past. On February 22, a new group in Washington decided to do a little something different to celebrate Black History Month. The gathering was hosted by the Organization of United People (OUP), who served sandwiches donated by Pret a Manger. Held inside St. Stephen and the Incarnation Episcopal Church, home to Thrive DC and Loaves and Fishes, this meeting introduced contributions of black people to the homeless population.

OUP’s mission is to give the homeless a forum for expression. Valerie Williams said that the group wanted to bring black history to the homeless. “They are people and we need to show people that the homeless have talent, they are human and exist,” she said.

“We want to bring homeless individuals love,” Williams said. She emphasized the need to work with the homeless so that they can show society that a homeless person can be productive.

OUP’s short journey began August 28, 2013, with its founding. Obediah Black said that for 14 months, different people from within the homeless community came to him, hoping to start a new group. Black said he declined at first, but because of frustration with the situation of the homeless population, he changed his mind. 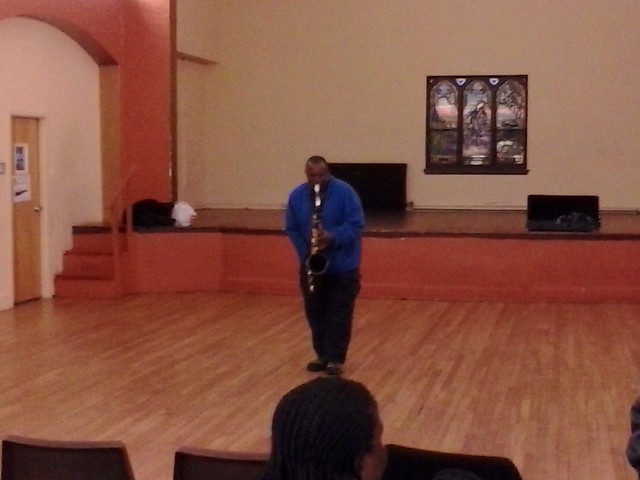 “There were people on the sidelines who didn’t believe we could do it, but we proved that once we are organized and determined, victory is certain,” Black said. And yet, “we haven’t been able to duplicate that since.”

Black feels that the homeless population lacked an organization capable of taking advantage of the energy and motivation of its population.

The black history forum was OUP’s first public event. When it comes to issues of the homeless, OUP members are not afraid to put color into the struggle.