More than 50 Ivy City residents and other community members gathered at Bethesda Baptist Church on Feb. 11 to hear the latest proposed developments for the historic Crummell School site. A bill introduced in late 2017 that received a hearing in June would lease an approximately 100,000 square foot plot of city land to a development team for 99 years at the rate of $1 per year. The disposition agreement hinges on a $14 million dollar investment by the development team, Ivy City Partners, to renovate the school building, a national historic landmark that has been vacant since the ‘80s, which will remain under the city’s control and be turned into a recreation center. Retail, residential and industrial space is planned for the land being leased. 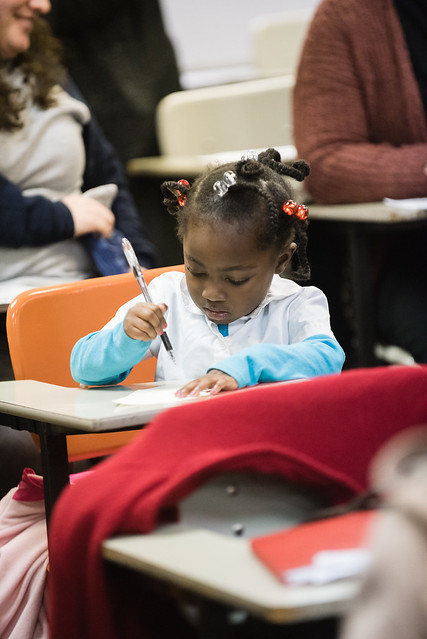 Several children accompanied their parents to the meeting at Bethesda Baptist Church. Photo by Rodney Choice

In a prior community meeting, Ivy City residents expressed the desire for more public and green space. The revised development plan accommodates that request by including an additional 6,800 square feet of green space, or .16 acres. Whether that space will remain under city control or transfer as part of the lease is undetermined. According to a spokesperson for the Deputy Mayor on Planning and Economic Development, “Ivy City Partners has contemplated changes to the program but none have been finalized.” To accommodate the community’s request for more green space, initially .5 acres, the residential plan was adjusted to develop 343 apartments instead of the original number of 375.

Many people asked questions concerning how space would be utilized, but Ward 5 Councilmember Kenyan McDuffie and Ivy City Partners — comprised of StonebridgeCarras Management, Oceanpro Industries and the Jarvis Company — affirmed that the city and the community will determine the programming for both the recreation center and the green space.

“This project is going to remain as D.C. government property,” McDuffie said. “But I also see [the programming] as an opportunity for the community to help to shape what happens.” The developers have budgeted one million dollars for the programming of the green space and the Crummell School. 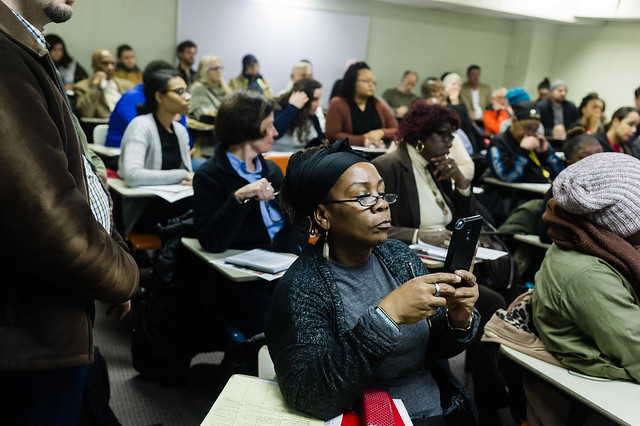 Ivy City residents and their supporters filled a room at Bethesda Baptist Church to hear about updates to the Crummell School redevelopment plan. Photo by Rodney Choice

“My biggest thing is affordable housing. You know, I was homeless not too long ago, and I really am concerned about the people in D.C. having a place to live,” said Sabrina, an Ivy City resident. “If they’re going to bombard us with all of this construction and want to build stuff, it should be for us to be able to live comfortably and not just shoved in a matchbox.”

In addition to housing, the plan calls for 10,000 square feet of ground floor retail and 40,000 square feet of below-grade industrial spaces. Bill Jarvis, a representative from the development team, told attendees there will be retail and restaurant commercial spaces on the ground level. Profish will move from its current location at the end of the block and reside on the first floor. There will also be 290 parking spaces below ground. The retail spaces will be leased at market rates. 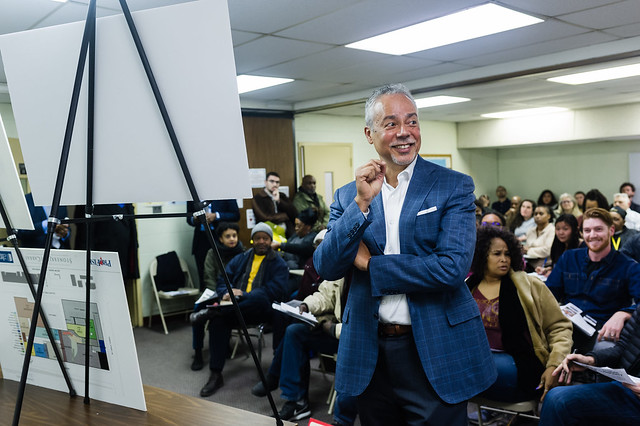 Bill Jarvis of The Jarvis Company, one of the three businesses that make up the Ivy City Partners development team. Photo by Rodney Choice

“If it’s all luxury development and at luxury prices, are these actual retail spaces that people in the community can rent and start their business out of?” asked one woman.

A common theme of concern from community members regarded the effects of gentrification. Attendees asked for rent estimates, how jobs and hiring will be handled, and about how the road infrastructure will handle the influx of people.

“Residents should be seen as the first viable source for hiring, both in terms of jobs, construction or otherwise, but also business that might compete throughout the construction process,” McDuffie said. Contractors involved in the project would be subject to the District’s “first source” law, which mandates hiring at least 51 percent of employees from the District for contracts worth $300,000 or more. 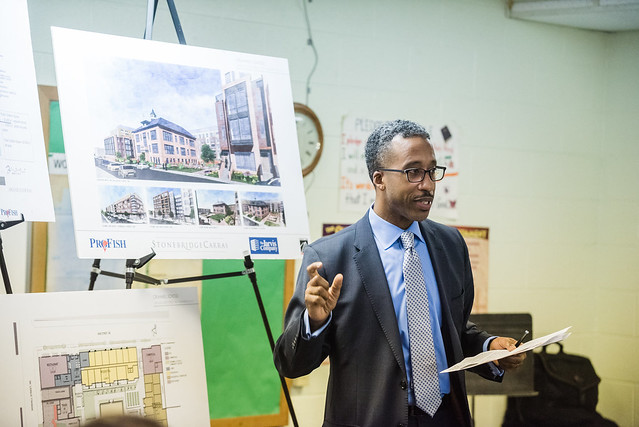 Some residents had hoped for much more public space. A group of youth, supported by their neighbors and the community organizing group Empower D.C., partnered with an architecture firm to draft their own plan for the space, which included a library, community garden, gymnasium, playground, and outdoor recreation space — in addition to green space and a community center in the school building. That plan was one of the final three considered by the city, but ultimately not selected.

The District’s solicitations for proposals came after residents worked with Empower D.C. to resist the property being turned into a bus lot by the Union Station Redevelopment Corporation, which leased the property in 2012. During a preliminary injunction and a series of appeals, Empower D.C. argued that asthma rates were already disproportionately high in the neighborhood and the property was surrounded by a school bus lot, industrial plants and busy New York Avenue. The site had previously been considered for a charter school in 2011. 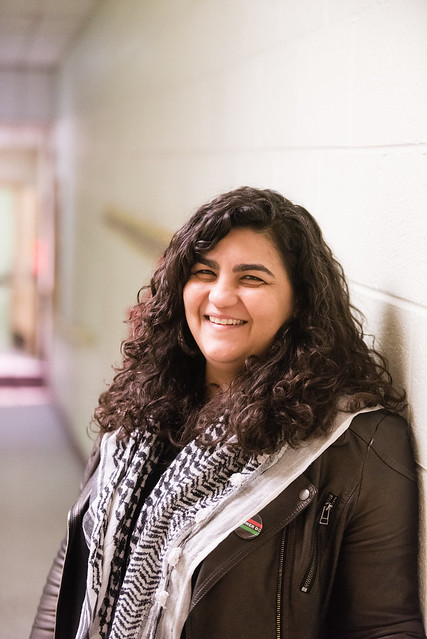 “I’m very happy that the residents have had an impact on the project in terms that the plan has been revised, there is more green space,” said Parisa Norouzi, executive director of Empower D.C. “However, the reality is, this is still a for-profit, high-end development that will contribute to the gentrification of this neighborhood.”

One woman asked how equity plays into the decisions being made for this development.

McDuffie responded by saying he prioritizes the communities where development is occurring first. He envisions Ivy City residents being hired for construction of the project and hired by businesses that move into the new space, along with support for local entrepreneurs who would go on to hire more residents. “To me, that is the model we should be doing more.”

Matt Baker, the owner of the restaurant Gravitas, was positive about the development plan. Although it has not been a perfect process, he said his restaurant’s business is struggling to keep the doors open and he believes more residents and retail will help his business thrive. 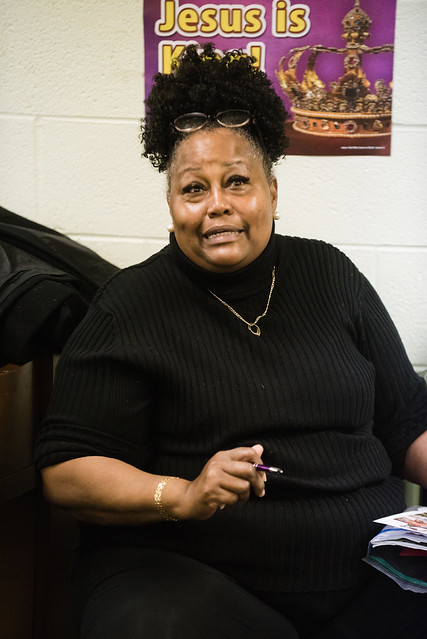 Brenda has lived in Ivy City since she was 9 years old. Photo by Rodney Choice

Two women, also supportive of the revised development plan, said the community needed a place where they felt safe to walk around and that the minute details will fall into place as the project moves forward.

Brenda, a resident in Ivy City since 1965, said she has some concerns but ultimately would just would like to see something done with the place.

Next steps for the project will require the mayor’s office to review the legislation. If the executive office alters it significantly, there will be another community meeting. If not, the project will continue to move forward. When the bill was introduced in 2017, closure of the surrounding land was not expected until the first half of fiscal year 2024, but the school’s renovation could occur prior to that. 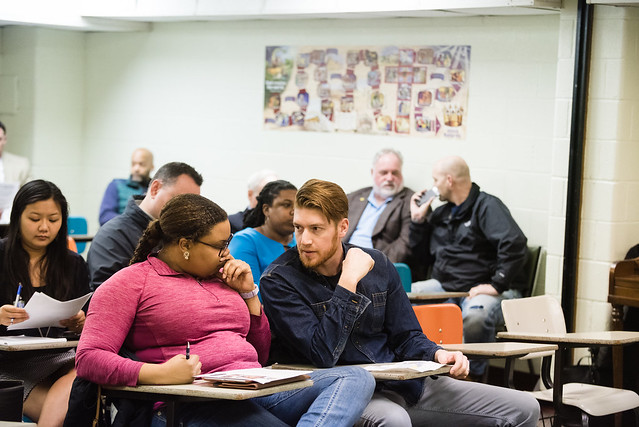 Meeting attendees discuss among themselves as they wait for the presentation to start. Photo by Rodney Choice