Tenants on strike describe the financial, medical, and emotional toll of apartments in disrepair

It is early February and Columbia Heights resident Felipe Salvador says his family hasn’t had functional heating for months.

Instead, he had to buy two portable radiators, one for the bedroom in which his three kids sleep and the other for the living room. On especially cold nights, when extra blankets weren’t enough, Salvador says he had to leave his oven on with the door open. He and his wife saw no alternative despite the safety hazard.

Even then, the makeshift arrangements were no substitute for the broken heaters, which the building’s owner, Urban Investment Partners Property Management (UIP), is responsible for maintaining. Salvador says he, his wife Lilia, and his kids have all gotten sick without adequate heating.

It’s just one of the myriad problems that he and his wife describe in detail while sitting at their dining table tucked between the kitchen and living room in their one-bedroom apartment. These are some of the disputes at the heart of a rent strike launched in December and the resulting court battle.

Another issue emerged in October when Salvador began to notice bubbles forming in his bathroom ceiling. Over time, Salvador says, the ceiling started to leak. After multiple complaints about the ceiling, UIP sent a maintenance worker who declared that nothing was leaking and said there was nothing he could do.

“We were very mad and we were very frustrated,” Salvador says in Spanish, as Georgetown University students and activists Mariel Mendez and Daniela Gaytan translate. “Every time we would go to use the toilet, and you looked up, some dirty water would fall on you. It was a matter of trying to dodge the water that was falling from the ceiling.”

When another maintenance worker sent by UIP came and fixed the leak in mid-November, Salvador says the drywall caved in, leaving a gaping hole in the ceiling. The worker left anyway. A close-up image of the ceiling hole in Salvador’s bathroom (left), and a wider shot of the damage to the rest of the ceiling (right). Both were taken on Jan. 14 while the temporary sheeting was off. Photos courtesy of Felipe Salvador The bathroom ceiling covered with sheeting Salvador put up himself the week of Nov. 18 (left). Photo courtesy of Felipe Salvador | The ceiling after having been fully repaired on Jan. 23 (right). Photo by Avi Bajpai

Salvador’s wife, Lilia, says they waited weeks for UIP to patch up the hole. Ultimately, they gave up and tried to solve the problem themselves, using ceramic and tin sheets. The damage to the ceiling was repaired by maintenance workers on Jan. 23, more than two months after the ceiling first caved in.In November, with the help of local activists from the D.C. Tenants Union and Georgetown University’s Kalmanovitz Initiative for Labor and the Working Poor, the tenants served management with notice of their intent to withhold rent if adequate repairs were not made within a month. On Dec. 6, 11 tenants from 3435 Holmead Place NW launched their rent strike.

UIP responded swiftly, serving each of the tenants with eviction notices in late December. The tenants are now working with the activists to challenge their evictions on the grounds that by failing to make repairs, UIP did not maintain habitable living conditions in violation of D.C. law.

As explained in the D.C. Tenant Bill of Rights, local law entitles tenants to a “warranty of habitability” — a legal standard that holds landlords responsible for “keeping the premises safe and secure and free of rodents and pests, keeping the structure and facilities of the building in good repair, and ensuring adequate heat, lighting, and ventilation,” says Joel Cohn, a legislative director at the D.C. Office of the Tenant Advocate.

If their landlord is notified of a problem and fails to make adequate repairs “within a reasonable period of time,” tenants can legally withhold rent by providing written notice, documenting their claims and paying each month’s amount into an escrow account while they await a court order on their situation, Cohn says.

The practice is not without risk, as tenants may still end up evicted in the end. Cohn recommends tenants first seek a property inspection from the D.C. Department of Consumer and Regulatory Affairs and secure a housing code violation report to justify a potential rent strike, but adds that it is “not necessary” to file a complaint in order to legally withhold rent.

Since 2004, DCRA has received 51 property-code violation complaints from residents in the Holmead Place building, none of which pertain to the issues described in this article. Of those, 31, or roughly 60%, occurred after 2011, when UIP bought the building for a foreclosure price of $7.05 million and took over management. The current assessed value is $10.87 million, according to the District’s property tax database. UIP’s website lists rents for the three available units as $1,462 for a studio and $1,609 for a one-bedroom unit.

UIP did not return multiple requests for comment. In an email sent to Street Sense Media the day after the article was published, a principal at UIP, Steve Schwat, wrote that the photo of the hole in the bathroom of Felipe’s unit “is not representative of the condition of the property or [UIP’s] ability or willingness to make such repairs when needed.”

He continued, “Numerous residents of the property have refused and prevented management from inspecting their apartments for repairs. The practice is well known; make complaints, prevent repairs, use the needed repair to avoid court action when rent is late or unpaid.

“We manage almost 3,000 apartments in DC and MD. The photo and the article are not consistent with our firm’s reputation nor the manner in which we manage.”

Schwat wrote in a second email that the company responds to all maintenance requests. “I am proud of the people that work for UIP Property Management. They work hard for our Residents,” he said. “I think this particular incident is more about drama then it is about conditions at the property.”

Salvador says he joined the rent strike because he wanted “someone to listen to us.” He says there are other tenants in the building, many of them Hispanic immigrants, who might want to join the strike but can’t afford to miss work to appear in court, or are unaware of their rights.

“We come to this country, we don’t know the laws here. If they tell us ‘stand up,’ we stand up. If they say ‘sit down,’ we sit down, because we don’t know better,” he says. “Of course, the management takes advantage of that. But when it comes to rent, they’re always after that.”

Lilia has been unemployed since losing her job in February 2019. She has been hired to start a new job soon, but for the last year, Felipe shouldered the entire burden to provide for the family. To make ends meet, he has been working as a part-time Uber driver in addition to his regular shifts as a delivery driver for a local supermarket. In total, Felipe says he works roughly 70 to 80 hours per week to pay for repairs on top of his $1,483 rent. 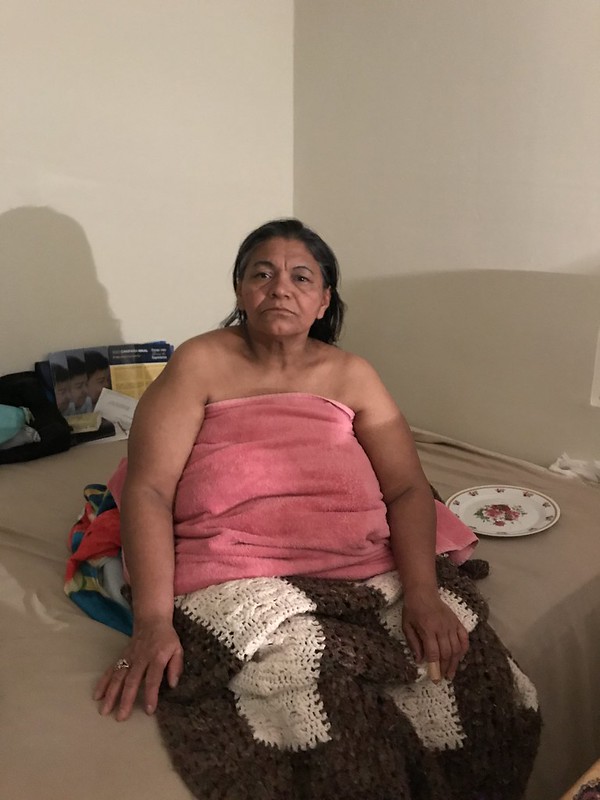 Norma Salvador in her fifth-floor apartment. Photo by Avi Bajpai

Three floors up, in a smaller studio apartment, another tenant who has been withholding rent says she has had mold on her living room walls. Norma Salvador says she has also had problems with cockroaches and mice, as well as three separate bedbug infestations. The two tenants are unrelated and happen to share the same last name.

When her apartment was first infested with bedbugs, Norma says, she threw out all her furniture and belongings, including her mattress and a table given to her by a relative. However, she couldn’t afford to refurnish her apartment again, so she relied instead on insecticide she bought from Home Depot to deal with the subsequent infestations.

Other tenants at Holmead Place have complained of bedbug infestations, according to Norma. Felipe confirmed that his previous apartment in the building had also become infested.

After the most recent infestation in November, Norma went with the other tenants to UIP’s main office in Northeast D.C. to deliver a 30-day notice of their intent to withhold rent.

“We told them we were giving them a month to fix everything,” she says. “They told us they were going to do repairs, but it seems like there are way too many repairs to make.”

The tenants made their first appearance in D.C. Landlord & Tenant Court on Jan. 22, prior to which they held a rally against UIP outside the courthouse. UIP repaired the hole in their bathroom ceiling the day after the hearing. Norma and Felipe are both scheduled to reappear in court for further proceedings in February and June, per court records.

This article has been updated to clarify that the hole in Felipe and Lilia Salvador’s apartment was eventually repaired. The caption for the photos provided by the family to show the initial damage has been corrected to reflect that the images were taken on the same day, not before and after UIP’s initial work to fix the leak, which further damaged the wall.

Language has been added to explicitly state both that the Salvadors have not filed a formal housing code complaint with the Department of Consumer and Regulatory Affairs and that doing so is not required to legally withhold rent.

Information about UIP’s perspective on the situation — from emails sent to Street Sense Media in response to the article — has been added, as has a photo of the Salvadors’ attempt to fix the wall while waiting on UIP and a photo taken post-repair.