Three Tenants Were Facing Eviction Threats. Amid A Summer Of Protest, Dozens Of Activists Mobilized

Sifu has been living in a modest brick house in Chillum, Maryland, just over the D.C. line, for almost a year.  The place has been a haven for her following a series of traumatic events in her personal life. She’s been growing herbs — mint, lemongrass, lavender — in big pots by the front walkway, and inviting her neighbors to come by and take clippings.

“This was a very nice healing house for me,” she said. “I’ve made this place my house, my home.”

But then the coronavirus hit, and Sifu and her two other roommates fell on hard times. Sifu, who declined to provide her last name, lost her job at an after-school program. The three of them couldn’t pay everything they owed in rent.

Sifu and M Lovell, one of her roommates, say their landlord started sending messages threatening them with late fees and eviction in June.

“We have an email that he was going to charge late fees and he kept harassing us, saying that he needed the full rent by July 7th,” said Lovell.

The tenants put together a GoFundMe page, and raised the money they needed to pay their back rent. But even though they paid what they owed, Lovell says their landlord sent them a notice via email in mid-July, requiring them to leave the house within ten days.

Beyond standard legal protections, tenants in Maryland have an extra layer of protection against eviction during the pandemic: an executive order from Governor Larry Hogan prohibits eviction so long as the state remains under the state of emergency — and so long as the tenants can prove that their income has been significantly impacted by COVID-19. A second layer of protection, a pause on eviction-related hearings in Maryland courts, expired on July 25.

Sifu and Lovell say their landlord, Robert Miley, ignored their explanations of their situation and references to their legal rights, and threatened to come by on Friday and change the locks to the house. But unlike many tenants facing threats of eviction, the roommates had a next move: they got in touch with advocates they knew in the D.C. housing activist community.

The D.C. Tenants’ Union, Stomp Out Slumlords, and the local Democratic Socialists of America chapter organized a protest to coincide with when Lovell and Sifu said Miley planned to change the locks. 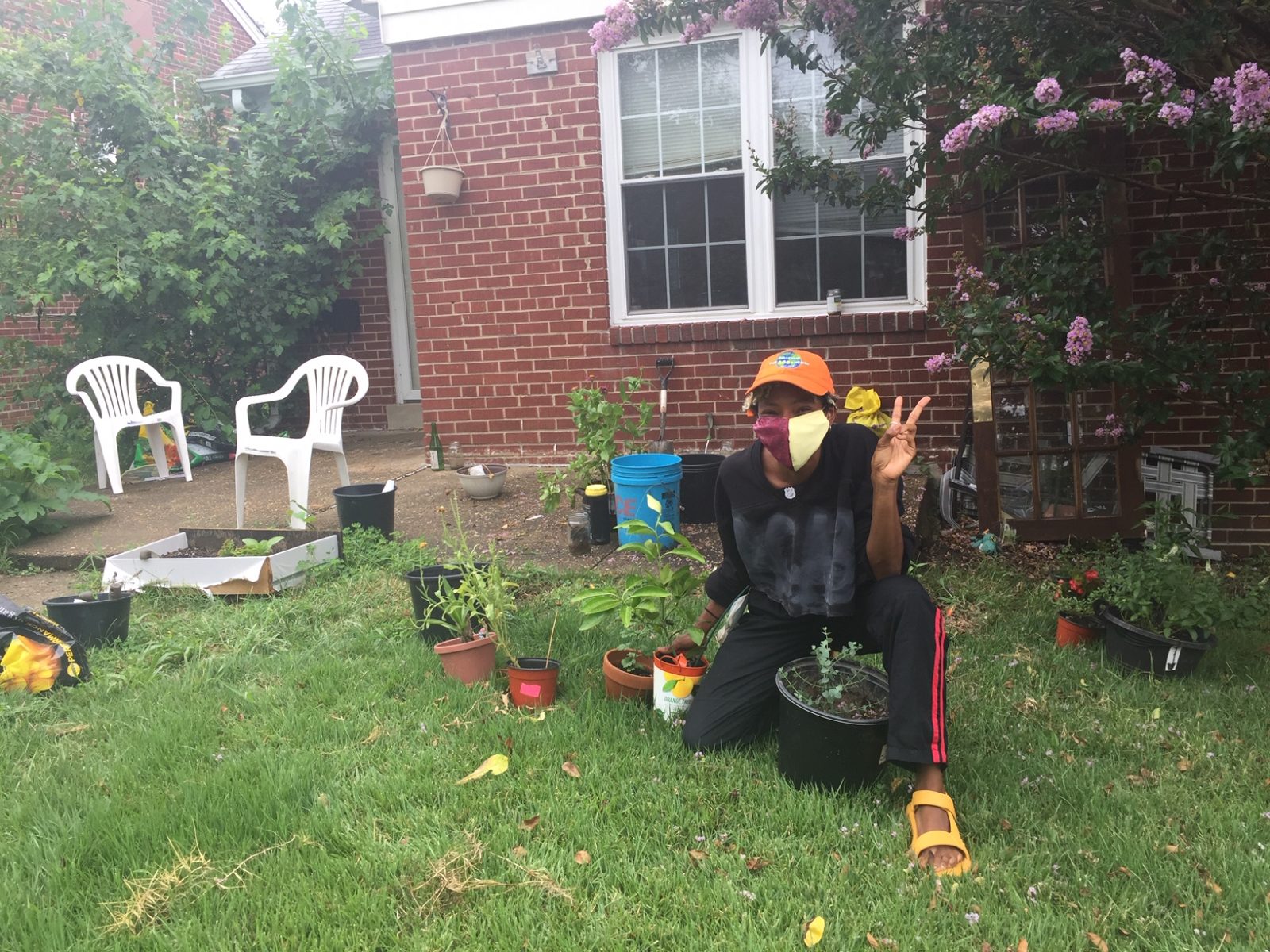 On Friday afternoon, dozens of demonstrators, wearing masks and carrying signs with slogans like “Slumlords out!” and “Cancel evictions now!” gathered on the front lawn and stationed themselves at all the doors to the home while the tenants retreated inside. The quiet dead-end street rang with chants of “When our homes are under attack, what do we do? Stand up, fight back!” and “Housing is a human right! Fight, fight, fight!”

Lovell and Sifu say they saw Miley come by briefly — but he left quickly, without engaging with the protesters. When the tenants called him to again request a 30-day window before they move out — which they all intend to do — he did not answer his phone. Miley did not respond to a request from WAMU/DCist for comment.

While the action prevented the threatened eviction Friday, advocates said they would remain vigilant, gathering protesters’ contact information in case they needed to mobilize again.

The protest in Chillum was miles away from Black Lives Matter Plaza and the heart of the summer’s protests over police brutality and racial injustice, but they had similar DNA — shared chants; a mostly-young, diverse group of protesters; abundant snacks and bottled water; and a similar sense of urgency mixed with excitement.

Oluwfemi Taiwo was one of the protesters. He’s a member of Pan-African Community Action, a group of Pan-African socialists which started a few years ago to call for an end to police brutality and the beginning of community control over law enforcement.

“We have a united cause against racial capitalism, against the police as an occupying force and against the forms of oppression that systematically form around that,” Taiwo said. “So housing is definitely part of that. And so we’re here in support.”

He drew a clear connection between the action and other recent demonstrations.

“It feels completely in line with all the other protests that are happening,” he continued. “You know, we have the coronavirus pandemic, which is essentially a warp speed version of the climate crisis. And we have this basic political problem, which is how are we going to distribute the cost of this? Who’s going to be protected? What’s going to be protected? And at every point in the crisis so far, the government’s chosen to protect rich people, chosen to protect the police system, chosen to protect landlords. And it never chooses to protect Black and brown working-class people. And so we got protect ourselves.” 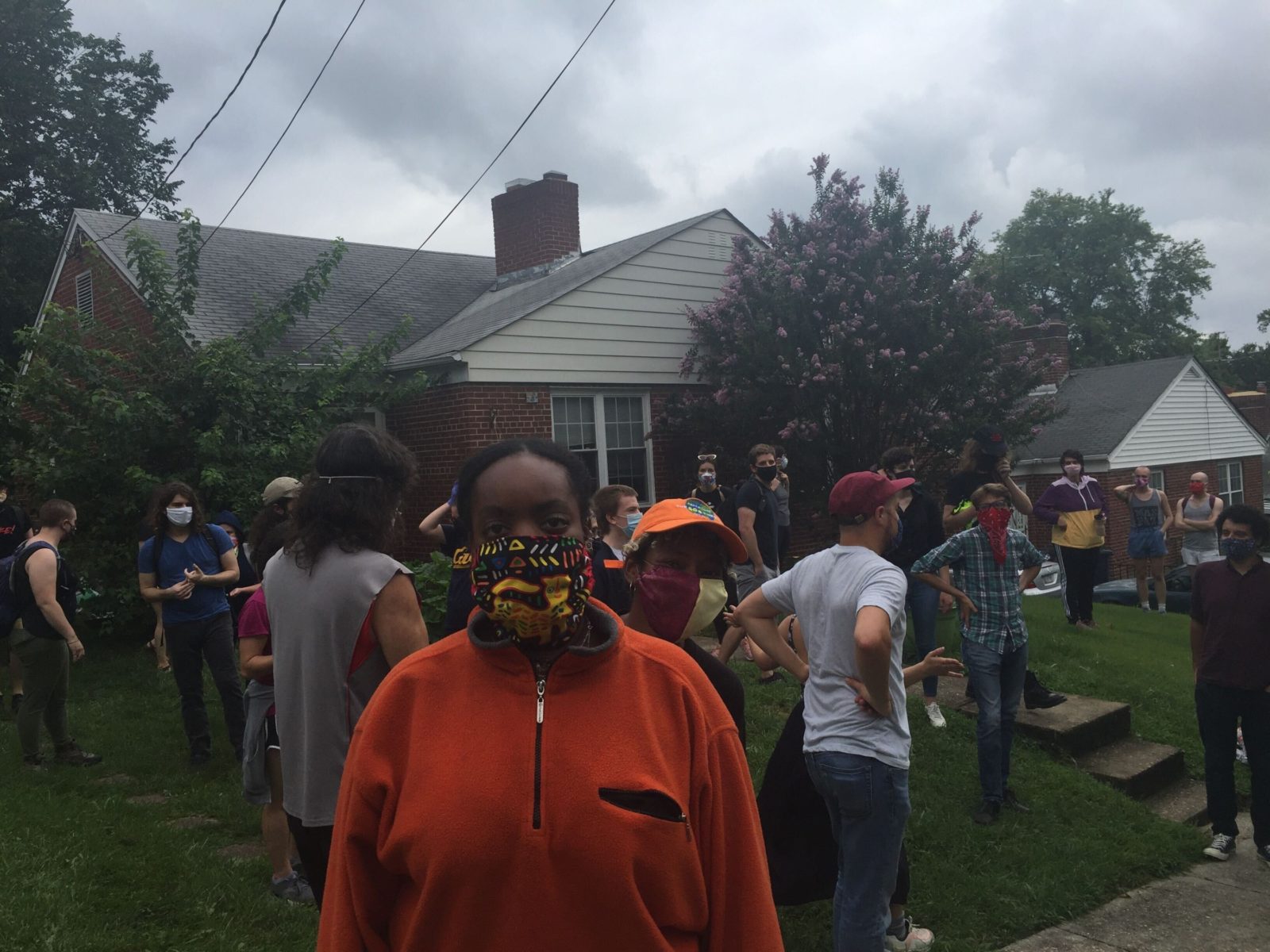 M Lovell stands in front of the house as protesters gather. Sifu peaks out from behind her. Photo courtesy of Margaret Barthel, DCist/WAMU

The evening felt like a victory, but activists say there’s a long road ahead. The financial hardships of the pandemic are continuing, but the clock has run out on some coronavirus-related eviction protections, like the Maryland Court of Appeals pause on hearings. In Virginia, the courts began hearing evictions again at the end of June after the state’s moratorium ran out, and Virginia Governor Ralph Northam has not taken executive action of his own to prevent evictions from continuing, though he has called for the courts to put another ban in place. Across the region, some landlords have been ignoring the rules anyway.

Some lawmakers are calling for bigger and better policy interventions to prevent evictions. Del. Julian Ivey, who represents the area in the House of Delegates in Annapolis, attended the protest. He wants to see the Maryland General Assembly convene in a special session to expand and strengthen the eviction moratorium beyond Hogan’s executive order, and also address policing reform.

He’s especially concerned about what might happen when the current eviction protections run out.

“There are just so many really tough stories that I hear every single day—people who have been working so hard for so many years, who have been paying their rent on time for years,” he said. “And now they’ve had a few bad months and they have landlords who have been threatening them, telling them that they’re going to be evicted the moment that they can be legally.”

In the meantime, he’d decided to take direct action to support people on a street he’s been door-knocking on for years.

“We’re here to show solidarity, but also to shame this landlord who is looking to do the unspeakable in kicking people out during a global pandemic,” he said. “We have to put people over profit. This is us doing that in a very specific manner.” 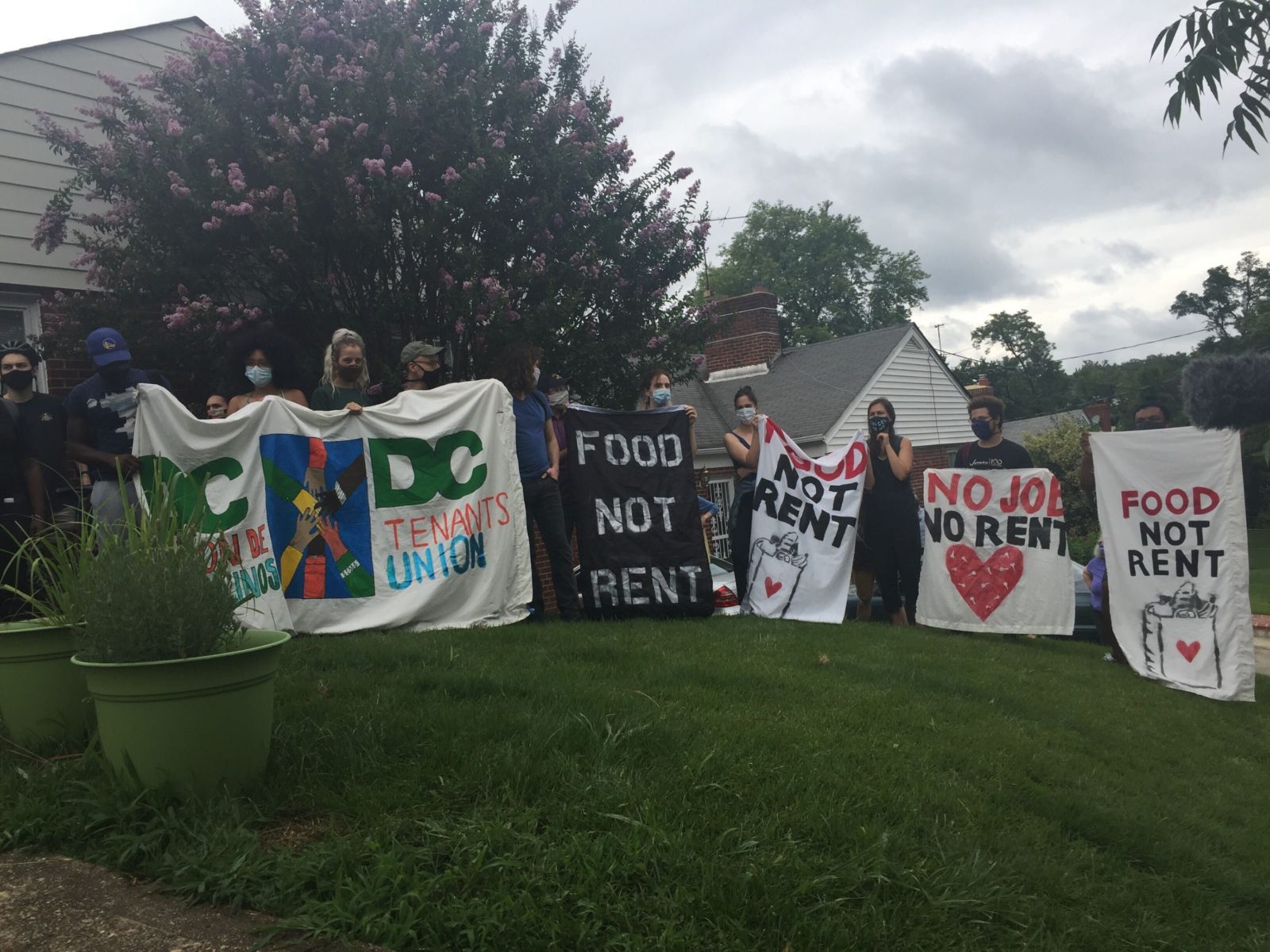 In the absence of policy help, housing advocates fear a mass wave of evictions and a big spike in homelessness, even as the coronavirus continues to infect local communities.

Those concerns loomed large as Roger Williams, a board member with the D.C. Tenants’ Union, surveyed the scene in Chillum. He worried that the activist response on display, while heartening, wasn’t scalable compared to the coming problem.

And there are more forces besides the pandemic making housing unstable in the region. The broader context, said Williams, is D.C.’s painful experiences with gentrification and the displacement of Black residents over the last two decades, which brought in a wave of wealthier, whiter residents.That was part of a strategy from Mayor Anthony Williams and his advisers, Williams noted, to pull the District’s finances out of the red.

“These people would be well-paid, and the business community that would cater to them would help to pull the city up,” he said. “All the other folks that weren’t as well off—well, I guess you had the idea of either benign neglect or malign neglect, and they would eventually be pushed out.”

D.C. consistently ranks on lists of the most gentrified cities in the country. In 2019, a study that examined the city’s outlook from 2002 to 2012 found that it was the fastest-gentrifying urban area in the whole country. Displacement has disproportionately affected D.C.’s Black population. In 1970, “Chocolate City” was about 70% Black; By 2015, that number had dropped below 50%.

Sifu and Lovell, who are both Black, say that gentrification is the backdrop to the dispute with Miley. Sifu said a number of homes in the neighborhood, whose residents are mostly people of color, are going up for sale. She’s been seeing a lot of prospective buyers who are white.

“Definitely, definitely gentrification is happening,” she says. “We’re not far from the Metro. It’s a prime spot. We’re right on the line of D.C.”

She’s starting to think about where she’ll move next—after all, she and her roommates want to move out, just with enough time to find a new living situation in the middle of a public health crisis. She’d like to stay at least sort of close to D.C., where she’s gotten involved in the activist community. But it’s expensive.

“I’m thinking about moving to Baltimore because it’s super cheap to live there,” she says. “And, you know, there’s still Black people around. And I don’t want to be without my people.”

This article was first published by DCist on Aug. 1.