“It is time for Congress to act,” emphasized actress Susan Sarandon during a recent congressional briefing about violence against the homeless. “We can’t allow these people to be invisible any longer.”

On June 25, U.S. Representatives Alcee Hastings (D-FL) and Eddie Bernice Johnson (D-TX) co-chaired a congressional briefing in support of a proposed piece of legislation to include the homeless as a protected class under the Hate Crimes Statistics Act. Susan Sarandon, the actress and activist, David Pirtle, a survivor of violence against the homeless, and Thomas Morgan, the co-director of a documentary about homelessness, testified during the briefing.

Throughout her testimony, Sarandon stressed that sheltered members of society must recognize the humanity of homeless people in order to overcome their indifference toward that vulnerable population.

“Congress is a proxy of society,” she said. “If society is apathetic, Congress will be, too.”

Sarandon told the story of Carl Simon, a 50-year-old homeless man who was beaten, stabbed and tortured this past year. When his attackers realized he had not died they forced him into a large suitcase he used to carry his few possessions and then drowned him in a bathtub.

“Carl Simon is one of the thousands we need to remember as we fight to protect those experiencing homelessness right now,” Sarandon said.

David Pirtle, a member of the National Coalition for the Homeless’ (NCH) Speakers Bureau, described the unprovoked violence he experienced when homeless. He survived five attacks, including being beaten with baseball bats, being spray painted and being urinated on. 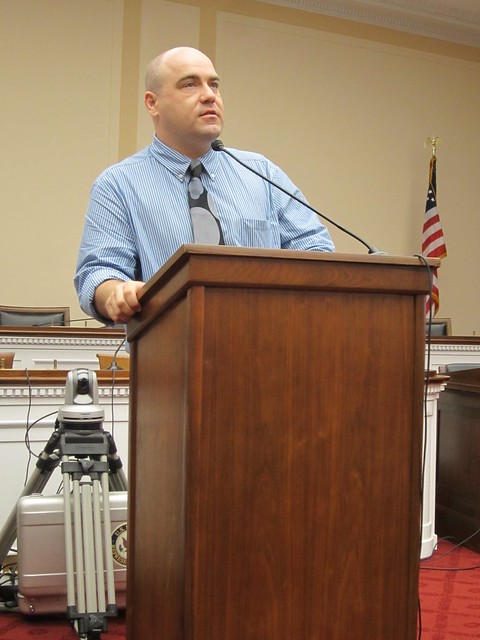 David Pirtle of the National Coalition for the Homeless testifies before Congress about the violence he experienced when homeless. Photo by Rachel Cain

“Most [attacks] are done just for fun,” Pirtle said. “I don’t understand how a person can do that and laugh.”

The proposed legislation, HR 1136: Violence against the Homeless Accountability Act, would amend the Hate Crime Statistics Act to make the federal government responsible for compiling data about crimes committed against homeless people. At the moment, the Hate Crime Statistics Act requires the Attorney General to collect information on crimes committed because of a victim’s race, religion, disability, sexual orientation or ethnicity.

HR 1136 is sponsored by Eddie Bernice Johnson (D-TX) and co-sponsored by 23 other members of Congress, including one Republican, Ileana Ros-Lehtinen (R-FL).

Since 2007, several efforts have been made for Congress to have crimes against the homeless included in the Hate Crimes Statistics Act. However, all these bills died in committee.

Currently seven states and three cities recognize violence against the homeless as a hate crime. Opponents contend that homelessness should not be included as a protected class in the Hate Crime Statistics Act because homelessness is not a permanent condition, unlike the other classes protected in the Act.

An official from the Anti-Defamation League said in an interview with NPR that there needs to be a better definition of homelessness and an understanding of whether it is, like the other characteristics protected under hate crime laws, an unchangeable characteristic.

“What is the definition of homeless? What is immutable about homeless? Is it an immutable characteristic? Is it exactly the same as race, religion, disability, sexual orientation, gender?” asked Michael Lieberman, the Washington counsel for the Anti-Defamation League.

According to the NCH’s new report, “Vulnerable to Hate: A Survey of Hate Crimes & Violence Committed against the Homeless in 2013,”  bias against the indigent drives many crimes against the homeless. Some crimes are opportunistic, a direct result of the vulnerability homeless people experience because they have no shelter for protection. The NCH only records crimes committed by housed perpetrators against homeless individuals in its report.