Before his first semester at Georgetown University, freshman Andrew O’Brien hatched an idea to create a booklet to tell the stories of people experiencing homelessness. On March 9, “Profiles of the D.C.’s Homeless” was registered with an International Standard Book Number (ISBN), and became available for purchase on Amazon.com.

O’Brien—the writer, photographer and editor—was inspired by conversations with people on the street of his hometown, Boston. He signed up for a class, Ethics of Entrepreneurship, in order to access the $1,000 grants it provides students to innovate and do good.

After interviewing some people on the street around Georgetown, O’Brien was lead to the Faces of Homelessness Speaker’s Bureau, part of the National Coalition for the Homeless (NCH). 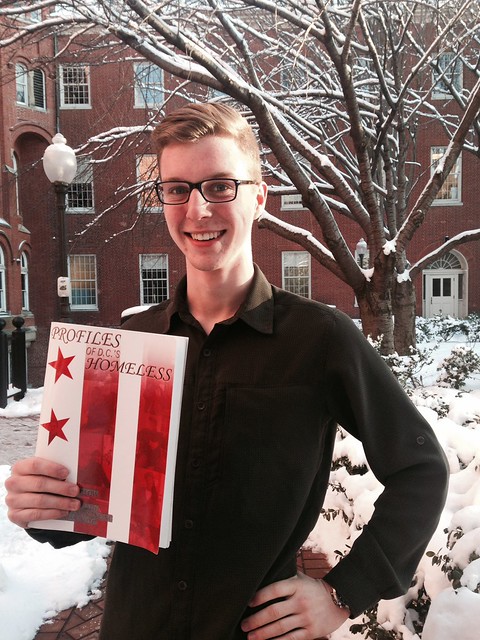 “We get a lot of these sorts of project ideas,” said David Pirtle, a speaker for Faces of Homelessness. “He struck me as very determined to get it done.”

One month after meeting with Michael Stoops, Director of Community Organizing for the National Coalition, O’Brien brought back the magazine containing 10 profiles of homeless and formerly homeless men and women.

“It was one of the quickest, most successful turn-around projects that I’ve ever seen a student do,” Stoops said.

The project took O’Brien two and a half months to complete, beginning in September 2014.
“We are intern-friendly and student-friendly,” said Stoops.

Even if a student project or experience just makes an impact on the student, NCH believes it is worthwhile because the students are the future of the U.S., according to Stoops.

“I see young people as one of the groups that’s going to help end homelessness in this country,” Stoops said. “They’re not as jaded.”

O’Brien seems to think of his youth as an asset as well. His magazine’s introduction reads “I’ve got license to be an unrelenting idealist for at least five more years.” He isn’t satisfied to let the publication just have an effect on himself either.

There were enough funds to print 125 initial copies. Some were given to the people profiled within. O’Brien plans to charge $10 for the remaining copies in the first batch. The money will go back to Solidarity Press, a publishing collective that O’Brien created for this project. Some will be used to produce more copies of the magazine. The rest will be used for new projects, according to O’Brien.
He has high hopes for the future of Solidarity Press and wants other writers to get involved and spread the word about social justice and human rights issues.

In the meantime, O’Brien plans to distribute his magazine to as many people as possible.

Michael Stoops says that 90 percent of student projects like these don’t come to fruition, and those that do often perpetuate stereotypes about homeless people.

“The typical lazy reporter will go out and interview the first homeless person he sees and then say that they represent all homeless people,” Stoops said. “[O’Brien] understands that the homeless population is not monolithic.”

O’Brien says he never had to intentionally avoid stereotypes, because they don’t exist in reality.
“I went out, interviewed a random sampling of people, and this is what I got: a highly diverse group of people with no particular stereotype connecting them,” O’Brien said.

He often met his interviewees on the street. He would approach them, ask if they wanted water or anything, especially if they were near a convenience store. Then he would talk to them about the city’s politics or housing. Eventually, O’Brien would ask if they wanted to be profiled in his magazine.

Though some people didn’t want their families to know that they were homeless, or didn’t want this hard time in their lives to be documented, most were happy to share their stories.

O’Brien was grateful and a bit surprised.

“To be honest, if I were in their shoes and some college kid came up to me and asked for my life story after a bit of small talk, I don’t think I would have been as kind,” O’Brien admitted.

David Pirtle, having shared his own story, was particularly impressed by O’Brien’s interviewing skills when it came to emotional memories.

“He was always able to get past the regular spiel…and really get into the heart of the story,” Pirtle said. “I think sharing stories like these is the most effective way to build empathy for a population for whom people don’t have a lot of empathy.” 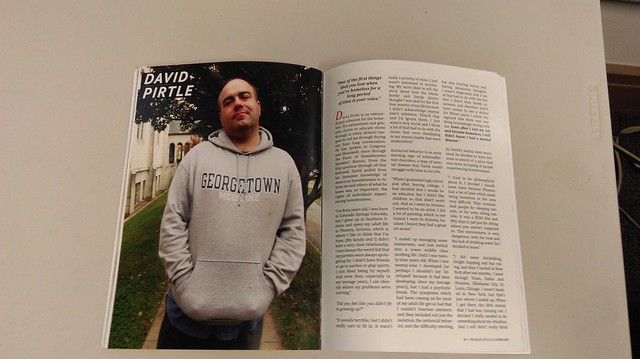 The magazine is meant to inform the reader and empower those who are profiled, according to O’Brien.
Pirtle lauded O’Brien’s ability to make their interview– filled with “um’s”, “oh”s and pauses—into compelling stories.

“I was really impressed with the way he pulled it together, not just my story but everyone’s,” Pirtle said.

Outside of Solidarity Press’s first publication, O’Brien is a member of Georgetown Homeless Outreach Programs and Education (HOPE). It is a student organization that hosts programs relating to homelessness.

He hosted a recent Georgetown HOPE forum featuring Street Sense vendor, Angelyn Whitehurst as a speaker. Street Sense Director of Marketing and Communications Jennifer Okoson also made an appearance to tell students about the organization’s mission and how students can get involved.

O’Brien is now benefiting from a Figge Fellowship to study faith and homelessness. According to the Georgetown University website, Figge Fellowships give undergraduates the tools for “theological reflection on the human problems of today.”

“Many homeless individuals I met expressed a kind of optimistic fatalism, a fatalism stripped of cynicism, about their situation,” said O’Brien. “Instead of railing against fate for their situation, they instead loved fate and accepted their situation as a kind of test from God.”

O’Brien wanted the opportunity to study his observation further.

“I wondered how the public’s perceptions and misconceptions of homeless individuals might affect the formation of this kind of faith within the homeless population,” O’Brien said. “That’s what I’m studying now: stigma and faith.”

The first few sentences of the introduction to Profiles of D.C’s Homeless are, “Hello friends. Thank you for picking up this publication. Let’s get down to business.”

From his first college semester, O’Brien has been doing just that.