Two-hundred community members chanted, “Healthy food on our plates, food justice in Ward 8!” as they marched the two miles that separate the Giant—Ward 8’s only grocery store—and downtown Anacostia. Residents of Wards 7 and 8 were taking part in a “grocery walk” on Oct. 14 to protest the scarcity of grocery stores in their neighborhoods.

Delois McNeal, a 70-year-old Ward 8 resident, took part in the walk despite having had a hip replacement. “It’s good exercise,” she said, carrying a symbolic bag of carrots. McNeal was one of many protesters who live in “food deserts,” or low-income areas with little access to fresh food. More than three-quarters of D.C.’s food deserts are located east of the Anacostia River where two Safeways in Ward 7 and the Giant in Ward 8 combine to serve more than 150,000 D.C. residents.

McNeal endures a taxing commute to the supermarket. “I take the W2 bus to Giant. The trip takes an hour and a half if I don’t miss the bus,” she said.

Like almost half of Ward 8 residents, McNeal doesn’t have a car and she lives too far away to regularly walk to the supermarket. 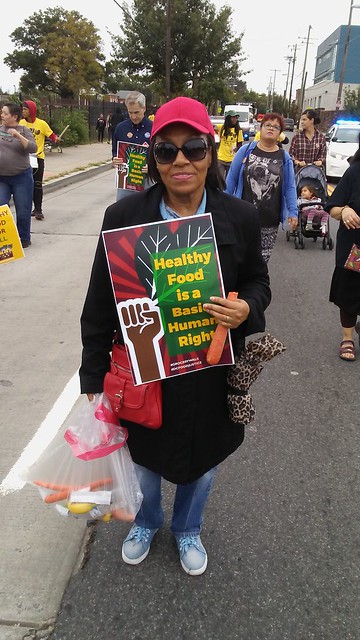 Ahead of McNeal marched Ward 8 resident Brian McClure, a policy analyst for the D.C. Department of Small and Local Business Development. While McClure owns a car and lives close to the Giant in Ward 8, it isn’t necessarily the most convenient store for him. “I appreciate the Giant, but the last time I shopped there was to pick up some sausage for breakfast, and it took me an hour to get in and out,” he said. McClure’s daughter is gluten-intolerant so he often drives to Navy Yard’s Harris Teeter, where specialty foods are more readily available.

Food deserts east of the Anacostia are not a new phenomenon. The FEED DC Act of 2010 sought to attract grocers to move into low-income areas of D.C. by offering a package of incentives, such as a tax exemption. Despite the Council of D.C. amending the act last year, the number of full-service grocery stores in Wards 7 and 8 has actually decreased from five to three since its passage in 2010, according to a study done by D.C. Hunger Solutions.

Beverley Wheeler, the director of D.C. Hunger Solutions, a nonprofit working to end food insecurity in the District, said that the FEED DC Act incentives are not as influential in grocery store developers’ plans as other factors. “Many grocery developers look at income and education as part of how they determine where to build stores. That’s probably why some of them aren’t going to Wards 7 and 8.”

The initial group of 200 protesters had grown to almost 500 by the time they reached the site of a rally in downtown Anacostia. Ward 8 Councilmember Trayon White, who took part in the walk, addressed the audience and called for more money in the city budget for healthy food access. “We’ve got $650,000 in the budget for co-ops, community gardens, and grocery stores, but it’s not enough,” he said. 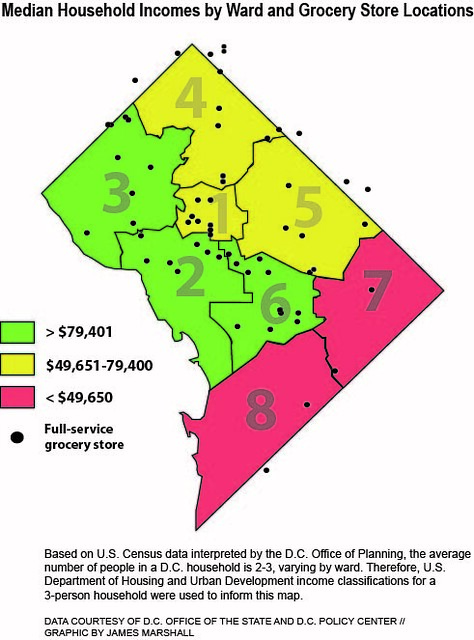 White is staying hopeful, though, and said that there are plans for two grocery stores openings in Ward 8 including Good Food Markets, a store whose mission it is to open locations in food deserts. It first opened up shop in a former food desert on Rhode Island Ave NE, and it plans to add a second location at the intersection of Atlantic and South Capitol Streets SW in 2019. White was unable to reveal the name of the second store in the pipeline for Ward 8.

Councilmember Vincent Gray of Ward 7 took the stage at the rally to voice his dissatisfaction with grocery stores in the East End, a term Gray prefers to “east of the river.” In August, he inspected Safeway’s Northeast location and was appalled to find mold on strawberries and meat that had turned gray. “Not only that, but they close at 9 p.m. when most Safeways in the city are open 24-hours or close at midnight,” Gray added.

Gray is determined to expand healthy food access in the East End. In March, he introduced legislation cosigned by White that proposes leasing city-owned land to grocery stores for $1. Still, Gray is uncertain that grocers will move into Ward 7, because retailers have spurned the ward before. In 2016, Walmart backed out of a commitment to open two stores in Ward 7. “It was completely unconscionable what Walmart did,” Gray said. “I’m working with grocery stores to come to Ward 7, but they haven’t signed on the line yet.”

Wheeler of D.C. Hunger Solutions is calling for a public-private partnership to bring fresh food to the East End. “For public health, the government may need to put in a lot of money. I know that we can do it because we can build a stadium,” Wheeler said, referring to the $300 million D.C. United soccer stadium partially funded by the city.

On Oct. 17, just three days after the grocery walk, Mayor Bowser announced a $3 million investment to bring new grocery options to Wards 7 and 8. The grant will support the build out of two construction projects: a renovation of the former Penn Branch shopping center in Ward 7 and the South Capitol Affordable Housing project in Ward 8. While the Penn Branch project does not have a grocery tenant yet, the South Capitol Affordable Housing project will be the site of Good Food Market’s 2019 opening.