At a recent celebration, U.S. Department of Housing and Urban Development Secretary Ben Carson personally congratulated the most recent class of seven new homeowners for successfully completing the D.C. Housing Authority’s little-known Home Ownership Assistance Program. Emphasizing self-sufficiency, Carson praised this year’s class for their determination as well as the program itself for opening doors to homeownership for D.C.’s housing voucher holders.

“All people in need have the ability to succeed if given the proper incentives and the opportunities,” Carson said, addressing the homeowners and others at the offices of the D.C. Housing Finance Agency in Northwest. “We can’t just wait for the opportunity to come along. If we’re a responsible society, we actually create the opportunities.”

For more than 15 years, the D.C. initiative — an element of the federal Housing Choice Voucher Program that local jurisdictions can choose whether to implement — has let residents apply to use their vouchers to help pay for a mortgage. Recipients also receive assistance from DCHA on matters such as credit counselling and guidance on how to navigate the system of lenders and real estate agents.

Kimberly Baxter, one of the seven graduates of this year’s program, described her journey in a speech at the June 7 event. In 2002, Baxter was homeless with a 2-year-old daughter and no high school diploma. That’s when she first received a housing choice voucher.

Baxter used her voucher to rent an apartment and later a house before entering the homeownership program. Along the way, she got her credit score up, received a GED while working full time, and graduated with honors from an associate degree program at the University of the District of Columbia Community College on North Capitol Street NE. In May, she graduated with a bachelor’s degree from UDC’s main campus in Northwest.

Baxter now works at D.C.’s Department of Human Services with a daughter in college and a son in high school. And in March of this year, she became a homeowner.

“Every day, I gotta pinch myself when I wake up,” Baxter said in an interview. 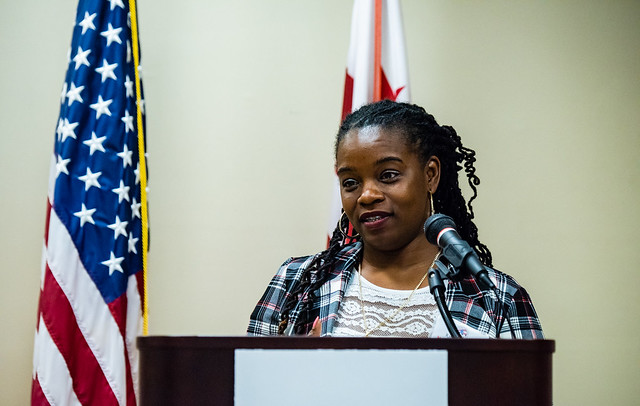 Her recollections of homelessness drove her to succeed in the program. “It was very scary, because I didn’t want to experience any of the things I had experienced in my past,” she said.

“What you saw today was an example of residents moving on with their lives — not only through homeownership, but through so many other things: education, work experience,” Garrett said in an interview. “Everything has grown for them through [participating in] our program, and that’s the real basis of things we try to do every day.”

The homeownership program is open to anyone who holds a federally funded voucher through DCHA. Before formally applying, voucher holders must submit an inquiry form, attend a briefing, and complete a homebuyer education and counseling course through one of nine D.C. nonprofits vetted to provide training and housing counseling services to District residents. After that, they work with one of DCHA’s homeownership coordinators to secure a mortgage through a participating lender before starting on the search for a property to buy. There’s no set time for participants to complete the process.

For those accepted into the DCHA homeownership program, vouchers operate the same way with mortgages as they do with rent. Voucher holders pay 30 percent of their income toward housing while HUD pays for the rest. They are allowed to use their voucher to pay for their mortgage for up to 15 years, but many become financially independent before then. Of the program’s 132 graduates since 2003, around 50 are now paying for their home without a subsidy, according to Alice Revel, a DCHA homeownership coordinator.

Revel said this year’s class of seven homeowners was about average in size. Around 15 to 20 people attend the briefing sessions held for the program each year. Some people return years after attending a briefing once they have had the chance to improve their credit or secure a better-paying job, according to Revel.

The program is so intense it can’t handle a larger class size per year, Garrett said

“It’s not a simple process of just putting people into a program and you shoot out homeowners,” he said. “It is very dedicated, the staff is dedicated, and they don’t consider our customers to be numbers. They really get into it because they want them to be successful.”

Personal connections among applicants and staff were evident at the celebration. Baxter thanked Revel by name in her speech and said Revel’s support was a key part of what kept her in the program.

Due to its small size, though, the program generally receives little attention. Two housing affordability experts contacted for this article were not familiar at all with DCHA’s homeownership program. According to HUD’s website, public housing authorities nationwide are allowed to offer homeownership options to their voucher holders, but are not required to do so.

DCHA’s homeownership initiative is funded through the federal Housing Choice Voucher Program rather than local appropriations, according to Garrett. Twenty percent of the approximately 3,300 housing authorities across the country operate similar homeownership programs; with an average of 17 participants each, more than 11,000 voucher holders become homeowners every year, according to HUD’s enrollment data. 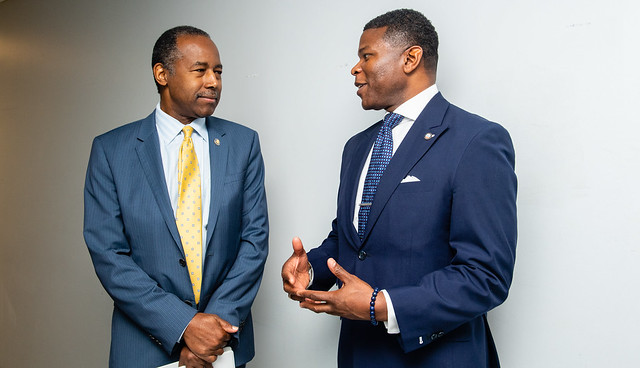 Voucher holders who enter the program say it is a life-changing experience. In his speech, Carson said homeownership is crucial to building intergenerational wealth and overcoming the racial wealth gap. “Homeownership is the principal mechanism of wealth accumulation in this country,” Carson said. “The average renter has a net worth of $5,000. The average homeowner has a net worth of $200,000.”

Grateful for the help she received, Baxter said she hopes continued funding for resources like the Home Ownership Assistance Program will allow it to help the many voucher holders who have not had the chance to participate.