Protesters organized by local advocacy groups Justice First and ONE D.C. marched on the Cleveland Park home of land developer Geoffrey Griffis on Saturday, Feb. 10. Roughly 70 people chanted slogans such as “Hey-hey, ho-ho, slumlords have got to go!” and carried signs reading “Land for People, not for Profit.”

The march came in response to Griffis’ company, CityPartners, taking over ownership of property in Congress Heights in late December. The previous owner, Sanford Capital, has been facing two lawsuits brought by Attorney General Karl Racine in 2016 for numerous housing violations after Washington City Paper exposed systemic neglect at buildings surrounding the Congress Heights Metro station and other Sanford Capital properties. Sanford Capital transferred the properties to CityPartners without informing the D.C. Superior Court on Dec. 27. The Congress Heights apartments had been managed by a court-appointed receiver since 2017 to ensure that income from rent was put toward an estimated $2 million worth of needed repairs.

The marchers, including several tenants of the apartments at Congress Heights, were demonstrating against what they see as the forced removal of tenants through neglect in order to make room for more profitable apartments.

Ruth Barnwell, president of the Congress Heights Tenants Association, spoke at the protest about her asthma caused by mold in her apartment. She said the residents of Congress Heights would not stop fighting for decent housing conditions. “Nothing they do will wear us down. We will just fight more. We are not quitters,” Barnwell said.

Griffis was not home during the protest, but a banner displayed prominently on his porch included the address to a website run by CityPartners with information about the redevelopment plans. CityPartners directed Street Sense Media to the site in response to requests for interviews. Will Merrifield, a staff attorney at the Washington Legal Clinic for the Homeless and the legal representative of the Congress Heights Tenants Association, said the transfer was an “attempt to avoid paying a substantial amount of the money to the court” through the receivership, as well as an attempt to avoid honoring the tenants’ rights under the Tenant Opportunity to Purchase Act.

Sanford Capital was under court orders to negotiate offloading the property exclusively with the tenants, as required by TOPA. The law requires landowners to sell their property to their tenants if the tenants can match the value of third-party offers. Tenants of Congress Heights have made a $3 million offer for the property with the help of the National Housing Trust, a nonprofit developer, and hope to build 200 units of affordable housing on the land.

CityPartners maintains that the land transfer was not against the law. “The transaction that gave CityPartners control of the buildings at the site was legal. To reiterate, it did not take away the rights of the tenants,” reads CityPartners’ website. “Geoffrey Griffis will honor the TOPA rights of the 13 existing tenants who live at the site.” 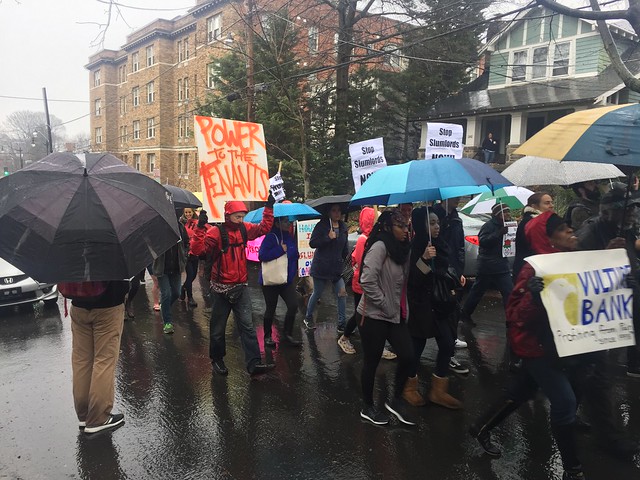 Protesters marched despite the rain carrying signs showing their support for the tenants. Photo by Jake Maher

Sanford Capital transferred the property to CityPartners via a “deed in lieu of foreclosure,” which does not violate TOPA. However, Merrifield sees the transfer as a sale disguised as a deed in lieu, in order to evade the law.

The Feb. 10 march was the third one on Griffis’s house since 2015 and is part of a larger campaign by the tenants of Congress Heights to protest the poor conditions of their apartments and prevent the planned redevelopment. Tenants in the past have documented rodents, mold, broken heating and air conditioning, and slow or shoddy repairs as part of what Merrifield calls “planned displacement through neglect.”

Sanford Capital’s and CityPartners’ “intentions are to continue to force the tenants to live in slum conditions in an attempt to displace them,” said Yasmina Mrabet, an organizer with ONE D.C.

One purpose of the march was to push back against Griffis’s efforts to present his acquisition of the properties as a fresh start, according to Mrabet. Griffis’s company distributed flyers reading “Sanford Capital is out, CityPartners is in” to tenants.

“Geoff Griffis is trying to frame himself as a new person coming into Congress Heights,” Mrabet said. “[But] Griffis is a long-time partner of Sanford Capital.”

Sanford Capital bought the properties in 2009 and 2010 and  submitted joint plans for the redevelopment with CityPartners in 2015. 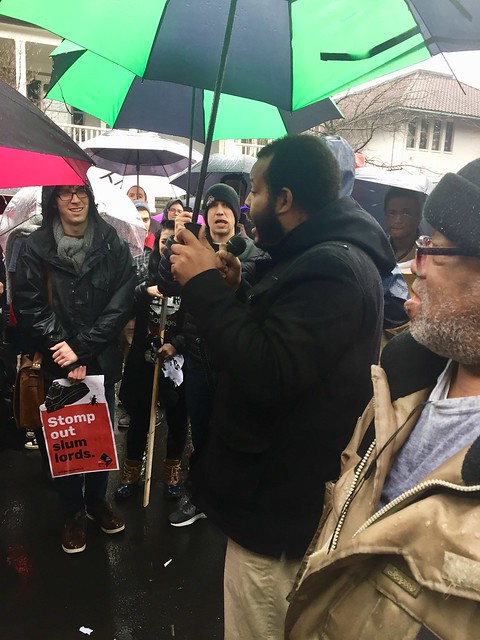 Eugene Puryear, director of field operations for Justice First, said that developers like Griffis are often able to redirect blame onto firms like Sanford Capital for such projects. “We know that without these big-money people and big-time developers and all their connections, these projects can’t happen,” Puryear said. “We want to try to take away the anonymity.”

CityPartners wrote in a press release that the tenants of Congress Heights have the options of temporarily relocating and moving back after the redevelopment at their current rental rates, receiving a buyout, or investing the buyout amount into the project and becoming limited owners. “CityPartners and Griffis pledge to treat the tenants with the care and respect they deserve, as Griffis has done throughout his long career in Washington,” CityPartners wrote on its website.

Six days after the protest, D.C. Superior Court authorized a $50,000 payment to the properties’ receiver, David Gilmore, to be used over the next 30 days. Gilmore requested $25,000 to address immediate health and safety concerns and an additional $25,000 in case of unforeseen emergencies while the properties’ legal status is being decided. The judge said the money is going to be paid, whether it’s by Sanford Capital or the new owners.

Merrifield said that the tenants are considering filing a legal complaint about the land transfer. The Office of the Attorney General, meanwhile, requested a “show cause” order from the court, claiming that Sanford Capital is in contempt with the transfer to CityPartners. The attorney general is seeking to add CityPartners as a respondent in its lawsuit.

This story has been updated to include details of a Feb. 16 D.C. Superior Court Hearing.