The Department of Housing and Community Development, which oversees D.C.’s costliest initiative to increase affordable housing for low-income residents, is not doing its job, according to an audit of the Housing Production Trust Fund.  The HPTF provides loans and grants to for-profit and nonprofit developers who are seeking to build or preserve existing affordable housing. The audit was requested by Councilmember Jack Evans and released March 16 by the Office of the D.C. Auditor, headed by Kathleen Patterson.

DCHD reported that 158 multi-family projects — just over 9,500 units — were funded by the HPTF between 2001 and 2015. However, the audit found that data to be unreliable.

“I am not totally surprised. I am concerned, though, that we do not have the kind of records that we need to actually count actual affordable units. That’s a big concern,” said Councilmember Anita Bonds, chairperson of the Committee on Housing and Neighborhood Revitalization.

The audit indicates that the nearly $700 million effort to create affordable housing is not being managed properly. Fourteen out of more than 100 projects were chosen to be audited. According to the audit, the 14 sites “represented a mix of wards, types of projects (rental and homeownership units), types of developers (nonprofit and for-profit), as well as funding purposes (acquisition, new construction, tenant purchase, etc.).”  Seventy percent of sites within the sample had compliance issues.

The day the report was released, DHCD published an online statement highlighting improvements under the management of Director Polly Donaldson since January 2015.

Most striking, the audit said, was the discovery that each housing property had different methods for certifying household income, “which varied greatly in quality.” In addition, DHCD had no procedures to implement policies required by law and had a “hands-off” approach to projects.

The audit cited examples to illustrate some of the failures of D.C.’s multi-million-dollar affordable-housing initiative. In one case, a resident earned $82,000; in another, a unit sat empty for nearly six months; and in a third instance, units for senior citizens were simply never built.

The audit found that developers are failing to pay back loans and uphold promises of building affordable-housing units. DHCD was unable to provide all necessary financial statements from borrowers, according to the audit. These financial statements which should be provided on an annual basis, are meant to help DHCD determine the borrower’s ability to repay the loan.

There is a substantial need for affordable housing in D.C. Almost 40 percent of households in the District spend more than 30 percent of their income on housing. Thousands of families are waiting for housing. According to a Point in Time survey and census conducted in 2015 by the Community Partnership for the Prevention of Homelessness, over 7,000 persons were experiencing homelessness. 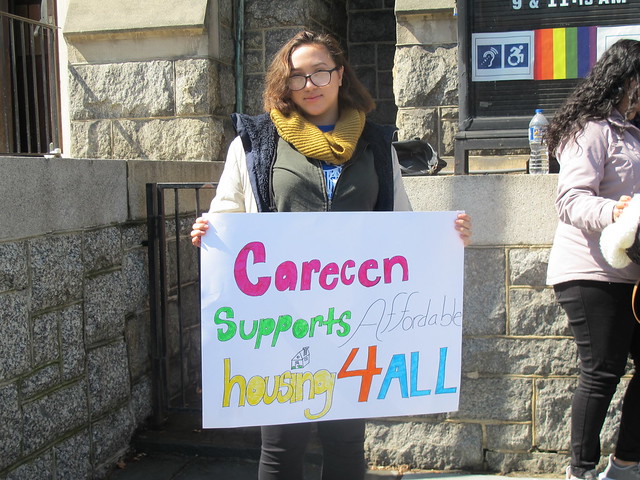 For the sixth year in a row, hundreds of demonstrators filled Foundry United Methodist Church on March 18 to call for more affordable housing funding.

The Housing for All campaign, part of the Coalition for Nonprofit Housing and Economic Development, and The Way Home campaign hosted the More for Housing Now rally two days after release of the audit.

As part of their recommendations for Mayor Muriel Bowser’s upcoming fiscal year 2018 budget, organizers proposed that at least $125 million be invested in the trust fund, which they lauded as “the backbone of affordable housing preservation and development in the District.”

More for Housing Now included resident testimony on affordable housing programs including the trust fund, the announcement of the 2017 Housing for All art competition and addresses by District officials including Bonds and Councilmember Elissa Silverman.

At the rally, Bowser addressed the audit by calling the timing of its release “curious” because it came shortly before her budget release and does not reflect the work DHCD’s director, Polly Donaldson, has done. The mayor said that only one of the audited projects was begun during her administration; the other 13 originated before she took office.

“I don’t know what department they were talking about, but they’re not talking about my housing department because Polly Donaldson is turning it around,” she said. “They are trying to dissuade you from asking for more money for housing.”

Auditors said DHCD should improve management of the trust fund to effectively create affordable housing that is being properly utilized.

The 45-page report lists 39 recommendations to help improve management of the trust fund and create affordable units. They include:

“I’m very happy to have the study complete. I think it’s a very smart starting point for the housing committee and we appreciate it greatly. But I am not sure how we can move forward on some of the measures that are suggested,” Bonds said.

Curbed D.C. caught up with DHCD Director Polly Donaldson for a quick Q&A in response to the audit.

This article was updated to include direct mention of DHCD’s response to the audit, as alluded to by Mayor Bowser. The audit is an analysis of the city’s use of the trust fund since its inception, not any one administration’s performance.