If you passed by the pulsating intersection of Park and 14th Streets Northwest in Columbia Heights on April 5, you would have thought there was a block party. People with smiling faces were shouting and clapping to the sounds of traditional Mexican music. The atmosphere was boisterous and fun. You would never have known that these people were fighting for their homes.

A block away from the Metro escalator, tenants, activists and community members held a rent strike targeting the apartment complex 1454 Irving Street Northwest, whose management has been accused of neglecting the property and tenants in order to empty the building and sell it at premium market value. The District of Columbia Tenant Bill of Rights states that a landlord may sell the property, but may not evict the tenants in the process. The landlord at 1454 Irving, Domenico Panza, who is aware of this law, appears to be letting building conditions deteriorate as a tactic to force tenants to look for other housing.

Just ask Rosalina Tica. She sought out a rent-controlled apartment upon moving to the District some 32 years ago and has been a resident of 1454 Irving since 1987. With a disabled husband, affordable housing was essential to her ability to provide for her family, as it is to so many low-income families. Tica reports that the conditions of the apartments at 1454 Irving have “always” been in a state of deterioration since she moved in, but things have gotten worse as the property values in the neighborhood have increased. Veronica Mosqueda, a tenant organizer at the Latino Economic Development Center, speaks to the crowd. Photo by Alexandra Kelley

According to city records, Panza has been trying to sell the building since at least 2013. A District Opportunity to Purchase Act notice was issued for the property in September of that year, which would have allowed the city to obtain the property and ensure the housing units remained affordable.

In the District of Columbia, when a rental property is put up for sale, tenants have the first right to band together and/or partner with a developer to buy the building. If they refuse, D.C. government then has the opportunity to obtain the building, if a minimum number of units is considered affordable. Only after the city refuses does the building hit the open market.

However, regulations that guide the city’s use of DOPA were not passed until late last year. The Department of Housing and Community Development is still wrapping up a process to identify the developers they will work with when obtaining property via DOPA and thus have yet to use the power of this 2008 law.

Fostering dilapidating conditions is a tried-and-true strategy used by slumlords everywhere. The goal is to bully low-income residents out of their homes in order to sell a more profitable vacant building. 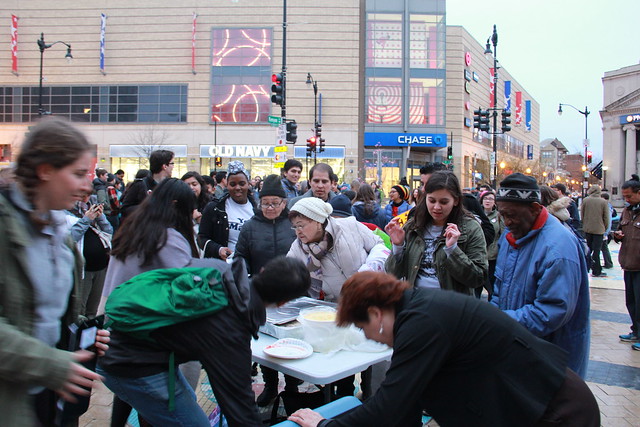 Food was served at the rally near the Columbia Heights Metro station. Photo by Alexandra Keeley

Veronica Mosqueda, a tenant organizer at the Latino Economic Development Center, reports that Panza intends to file a Petition for Substantial Rehabilitation, which is only filed when the amount of repair or rehabilitation that a building needs is equal to or greater than 50 percent of the property tax assessment of the building. According to a Greater Greater Washington article detailing the 1454 Irving case, Panza claims that a rent increase of 125 percent is needed to fund repairs of crucial building conditions. Naturally, most of his longtime tenants cannot afford such a staggering uptick in rent. More importantly, the substantial rehabilitation grant is not a temporary surcharge in rent, but a permanent increase.

By claiming these repairs as vital to the interests of the tenants, Panza takes advantage of this loophole in rent control as a legal way to price his tenants out of their homes. “It’s interesting that these things exist because at the end of the day they end up rewarding negligent and neglectful landlords,” said Mosqueda, who has been key in mobilizing tenants. She works with many disenfranchised renters and is quick to catch on to Panza’s scheme.  “If he had this building full with all the tenants, he would be making more money and if he had maintained this building consistently, he wouldn’t now need all this money to fix it,” she argued.

Another one of Panza’s strategies to empty the building has been to offer residents buy-outs. He offered some of his tenants, including Tica, a buyout of approximately $15,000. Some he bought out for anywhere from $5,000 to $7,000. Given the rising housing prices in this area, Panza will be trying to sell the building for around $300,000 per unit. “It’s a joke,” Mosqueda asserted. “He knows how much this building is worth and the value in this neighborhood.” With 21 units in the building, Panza stands to make approximately $6.3 million if he sells the building empty. At a forum held by Ward 1 Councilmember Brianne Nadeau and Ward 3 Councilmember Mary Cheh on the UDC campus last month, Cheh highlighted a similar loophole to convert rent-controlled units into market-rate apartments. She said landlords intentionally make the units available to voucher holders, whose benefits pay more than rent control would normally allow. Then, when the voucher holder moves, the apartment can be rented to the next tenant at a higher rate.

Cheh had gone on to warn her constituents against an increasingly common tactic of predatory landlords who let their units run down until they become uninhabitable. Then, when the residents clear out because of the poor conditions, the owners are free to do what they will with the properties. This is reflective of what tenants at 1454 Irving are striking against.

What convinces a tenant to take a buyout that is startlingly below market? According to the tenants and organizers, extreme and hostile pressure from the landlord. Panza effectively destroys his own building to push his tenants out. Rosalina Ticas recounted some of the brutal conditions she endured. The central air and heat frequently do not work, even during January and February. Ticas and her husband once went for three weeks without refrigeration or stove capabilities. Most of her food rotted. “¿Quien va a pagar para mi comida?” [Who is going to pay for my food?] she asked. When questioned about the uninhabitable conditions in the apartment, Panza chalked it up to a broken tube or pipe in the building’s central air system. Ticas and her husband were resigned to wearing coats and jackets indoors, awaiting a solution. The solution, as it turns out, came not with Panza fixing the electricity (though that did eventually occur), but with Ticas and her fellow residents learning about their rights through partnering with the Latino Economic Development Center. Armed with legal knowledge, Ticas now bellowed into the megaphone in Tivoli Square, “We dare him to come fight us,” and was met with ecstatic applause.

“Every tenant here is a leader,” Mosqueda asserted. “Each member of this tenant association brings so much love and passion and leadership.” Across the District, rising property values and higher rents are a major contributor to tenant displacement and eventual homelessness. Preserving existing affordable housing is fundamental to ensuring a high-quality life to all socioeconomic classes and building a stronger city. Inadvertently supporting slumlords is not.