A couple of weeks ago, I was blessed to have the opportunity to go to the island of Jamaica as an eco-tourist for virtually no cost. A friend of mine’s niece, who lives in Minneapolis, Minnesota, was sent to Jamaica for one month by her job, which provided her a villa to stay and work in that slept 10 people. She invited us to experience the often-ignored side of the island. On the flight, I was full of anticipation. I had not been to Jamaica since 1983 and was not sure what to expect. I did assume that things would be different, better than before.

As we neared the island, it appeared green and lush as we landed in the city of Montego Bay on Jamaica’s north coast, which is the hub of most of the island’s tourism.

When we landed, around 10 p.m. local time, the Montego Bay airport appeared much as I had remembered. It was dark and we couldn’t see a lot around us as we traveled the roads heading out of the airport towards the Treasure Coast, which is located on the southwest corner of Jamaica, far away from the established tourist areas. There is no nightlife on the Treasure Coast: no casinos or resorts. It is the breadbasket of Jamaica, mainly farmland. There are beautiful beaches on the Treasure Coast, but virtually none of them are swimmable because of the rocks and dangerous currents. There has been little to no development here, compared with other areas of the island or the Caribbean, which is both a blessing and a curse. 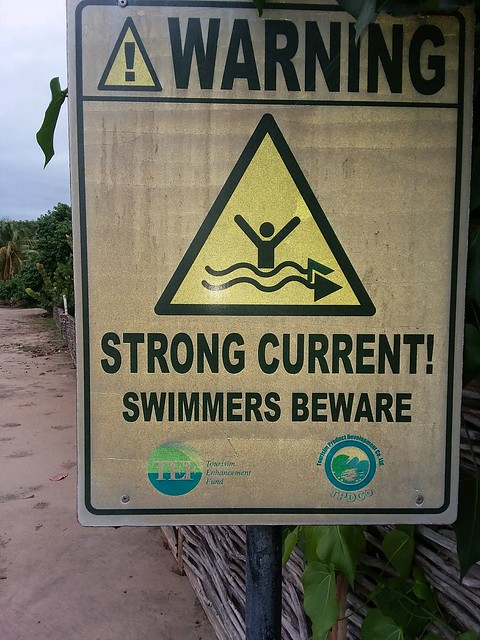 One of the reasons the Treasure Coast is not developed. Photo by Wendell Williams

This is where regular Jamaicans live, with a few villas sprinkled along the cliffs for treatment centers, yoga groups and various religious groups, such as the Rubes Buddhists and the Rastafarians. On the beach, there are a few areas where fishermen are able to launch their boats. One of the first things I noticed on the three-and-a-half-hour ride from the Montego Bay airport was the condition of the roads, some of the poorest I’ve ever ridden on anywhere. It was really dangerous to drive on them at all, let alone to experience the horror of riding on them as people flew by at breakneck speed on what, to me, is the wrong side of the road. Only on the return trip to the airport, in daylight, was I able to see just how dangerous the trip was.

By the time we got to the villa, it was 1:30 a.m. and pitch black, because the roads and most of the houses along the way had no lights. As I set out in the morning with our driver, Richard, the things I saw broke my heart.

The next morning, we visited some of the local areas and saw abject poverty all around us. Not much of anything was growing in this farmland, and the roads were littered with roadside stands. As we passed, you could see the desperate look on the workers’ faces that said, “Please stop and check out my goods.”

We saw houses that were shacks built out of plywood, with plastic tarps on the roofs to protect them from the rain. We saw people dressed in rags, which is not what you see as in the more tourist-friendly areas of Montego Bay, Ocho Rios and Negril. We visited Black River, the longest navigable river in Jamaica, where, historically, slaves were brought in to Jamaica and goods like sugar sailed out. A lot of what the natives suffer from today are the vestiges of slavery and colonialism. The number of people who seemed to be barricaded in their own homes made me ask questions of others that I came in contact with. They all talked about the lawlessness in Jamaica and said there is actually no police presence in most of the rural parts of the country. I was told that most of the police stations didn’t even have police vehicles. Middle-class people had their homes fenced off like fortresses, with bars on every window.

I was warned not to get hurt while on the trip, too, because there are no hospitals where most of the natives live. Most of the folks I spoke with were 55 or older. They said that some of the hospitals don’t even have a doctor on duty and that social services have significantly worsened since Cuba pulled out of the island after the ’70s. Most older Jamaicans reminisce fondly about the ways the Cubans had bettered their lives, and most of them spoke highly and affectionately about Fidel Castro. Despite the pervasive poverty, most people I met seemed peaceful, happy and optimistic about life and Jamaica’s future. 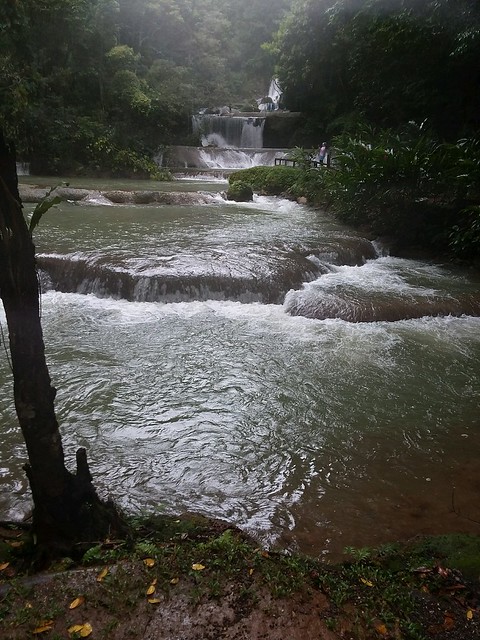 The hidden treasure of YS falls. Photo by Wendell Williams

Some of the spots I got to visit were breathtaking, such as YS Falls, which has seven tiers. It took us hours to get there from Calabash Bay, where our villa was located. With advice from the locals, we also drove more than two hours, along more terrifying roads, to the top of a mountain where, legend has it, two young slaves jumped off the 2,000-foot cliff into the sea. They were very much in love, but the plantation owner coveted the young and beautiful female slave and had the young male slave sold off to another plantation. The male slave soon escaped and made his way back to the plantation to see the woman he loved, at the plantation in the cliffs above the water. They made arrangements through the female slave’s brother to meet that night at the cliffs and escape to freedom, but the young woman’s brother told on them to gain favor with the slave master, and when they met that night, they were cornered by a search party. Instead of surrendering, the couple chose death over bondage, ran toward the cliff and jumped, hand in hand. 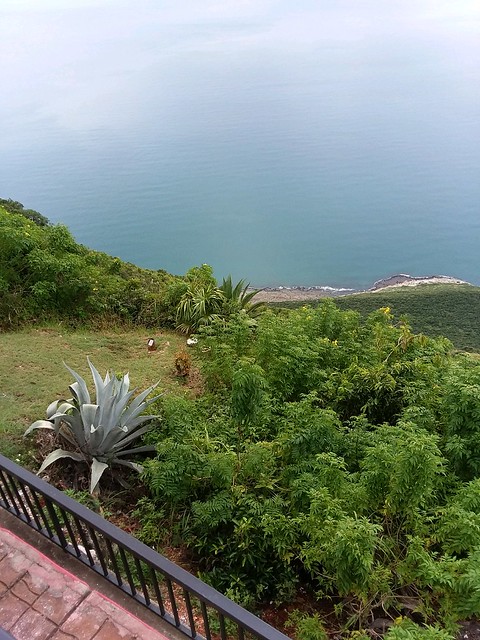 Lover’s Leap, more than 2000 ft. down to the water. Photo by Wendell Williams

After visiting all the villages and sites that we could see in the Black River area for several days, we headed back to Montego Bay for the flight home. On the road back, we stopped several times for things like gas, something to drink and to take pictures and talk to people.

Richard pulled up to the airport, and we began to unload out gear. We had made it a point to pack lightly, so we didn’t have much to unload. While saying our goodbyes to Richard and thanking him for his trusted service as a driver and a guide, my companion noticed that she could not find her cell phone. We searched the car inside and out like a border-patrol agent. We pulled out everything and looked in every nook and cranny. Unfortunately, we could not find her phone. As we all know in today’s day and age, some people have so many pictures, contacts and business data on their phones that the thought of not being able to find the device is something they cannot fathom. My friend was frantic, and after realizing that the phone was not in the car, she became upset as we walked through the airport. I talked to her about accepting that the phone was lost in another country and that the possibility of getting the phone back was close to zero. She was not in the mood to talk or reminisce about the trip or anything. 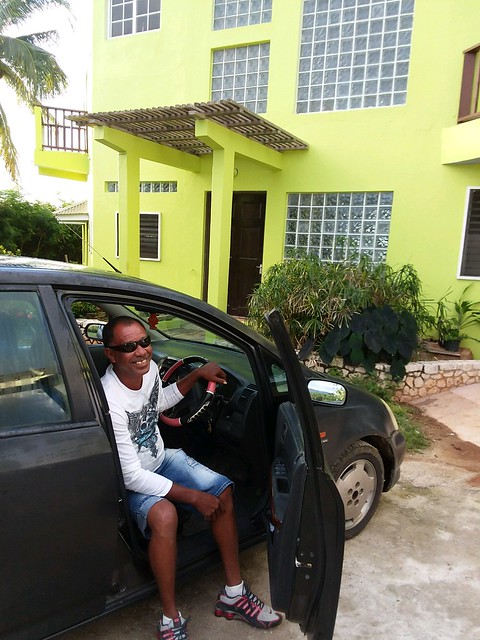 Richard, our driver and hero. Photo by Wendell Williams

We got on the plane, took off and headed back to Miami. The look on my friend’s face was heartbreaking. We changed planes to get back to Washington, D.C. The next day, we talked about how to get another phone, how the information could possibly be saved in the cloud and blah blah blah. It took her a couple days to surrender to the fact that the phone was really gone and everything on it would be lost forever. A day or so later is when the miracle happened.

Somehow, someway, somebody from our villa contacted me on WhatsApp. I had exchanged numbers with several people there, one of them a family member of another visitor who stayed with us. That person sent the message and said that Richard, our driver, had traced every stop of our route all the way back to Calabasas Bay, instead of driving straight through. Even the places where we stopped to take pictures. He discovered that a person who worked in a gas station where we had stopped at the beginning of the trip to Montego Bay had discovered the phone left on a counter and held on to it until Richard came by a few days later. Richard drove the phone back to the villa and gave it to the person who messaged me. Having something mailed or shipped from Jamaica to the United States is fairly expensive. But by making the effort to get the phone to our villa, one of the people we had befriended took it and sent it along with their aunt who was flying to Miami in another few days. Then she was kind enough to FedEx the phone next-day after arriving Stateside.

I did not initially tell my friend about the WhatsApp message because I wanted it to be a surprise. but I just couldn’t hold on until the phone arrived. When she heard, her whole mood immediately changed. All’s well that ends well, even in Jamaica.

So, if we review the chain of custody for this phone, the person that worked in the gas station performed the first random act of kindness by holding on to it for Richard to find. And you have to remember that people in Jamaica are very poor. Finding a phone of that quality could represent hundreds of U.S. dollars to them. Then, the second random of kindness was that Richard doubled his return trip to stop at each place we had visited to look for the phone, then drove extremely out of his way in the opposite direction to return the phone to the villa. The third random act was that the visitor who knew us was willing to take possession of the phone and pass it to a relative who was flying to Miami in a few days. Then, in a fourth and final act of kindness, that relative, a complete stranger to us, paid to ship the phone back to Washington, D.C., and everything ended up “Irie,” as they say in Jamaica. Random acts of kindness, reggae-style. 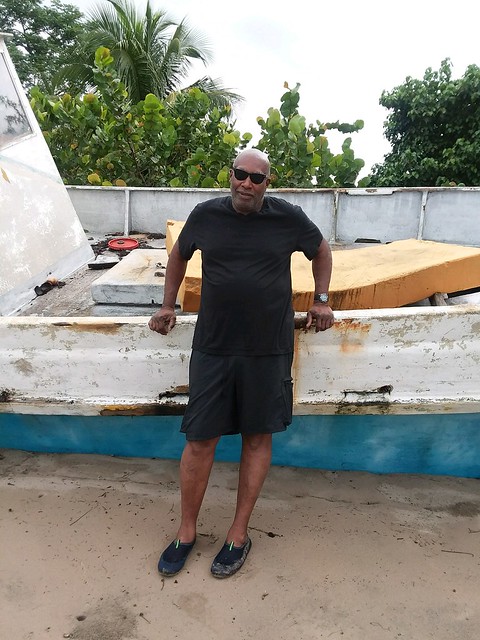