Roughly 75 District residents rallied outside D.C. General Family Shelter on a rainy Saturday, Oct. 1, to demand that Mayor Muriel Bowser prioritize spending for affordable housing over policing and jails in next year’s budget.

Bread for the City community organizers Nicole Baker and Sam Jewler wanted to get the mayor’s attention after they learned this year’s budget, which went into effect Saturday, allocated three times more funding to policing and jails than affordable housing programs.

In an official press release, they also called for Bowser to attend a town hall budget meeting that Bread for the City will host in December. Jewler acknowledged in an email that Bowser’s efforts to include the community in public budget forums hosted earlier this year were an improvement over previous administrations’ efforts. However, after attending those meetings he found them to be “somewhat superficial.”

“Given that Mayor Bowser starts putting together her priorities in November or December, and hosts the budget forums in February, it’s clear that…all the big decisions have already been made,” said Jewler. “We are beginning our budget organizing in October because we want to set a tone and show that this year will be different.” 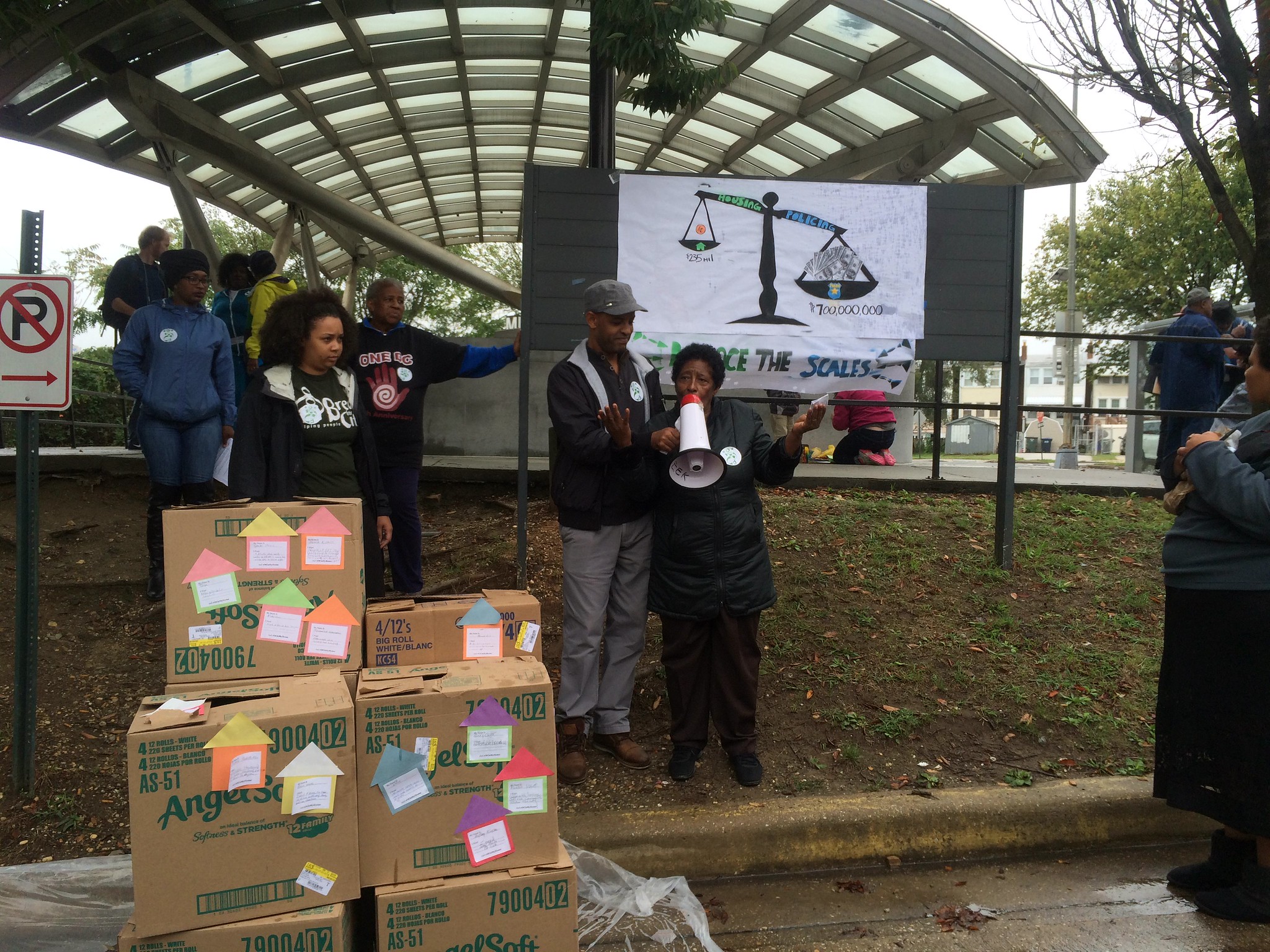 A speaker from the Horn of Africa Community Initiative talks about the struggle to find affordable housing as an immigrant.  Photo by Robyn Di Giacinto

“One of Mayor Bowser’s top priorities is to preserve and produce affordable housing in the District, so that everyone who wants to live in the city, can live in the city,” said Polly Donaldson, director of the D.C. Department of Housing and Community Development in an email statement on Oct. 7.

“The mayor does understand that the demand for affordable housing is higher than available resources,” Donaldson said. “[Next year’s] budget process is in its early development, however, so it is too early to speak to specific budgetary numbers.”

The rally, which was organized in partnership with the Horn of Africa Community Initiative, started at 1 p.m. in a driveway next to the Stadium-Armory Metro stop. The site overlooked the D.C. General Family Shelter and D.C. Jail. Attendees listened to speakers and chanted protest slogans despite grey skies and off-and-on showers. 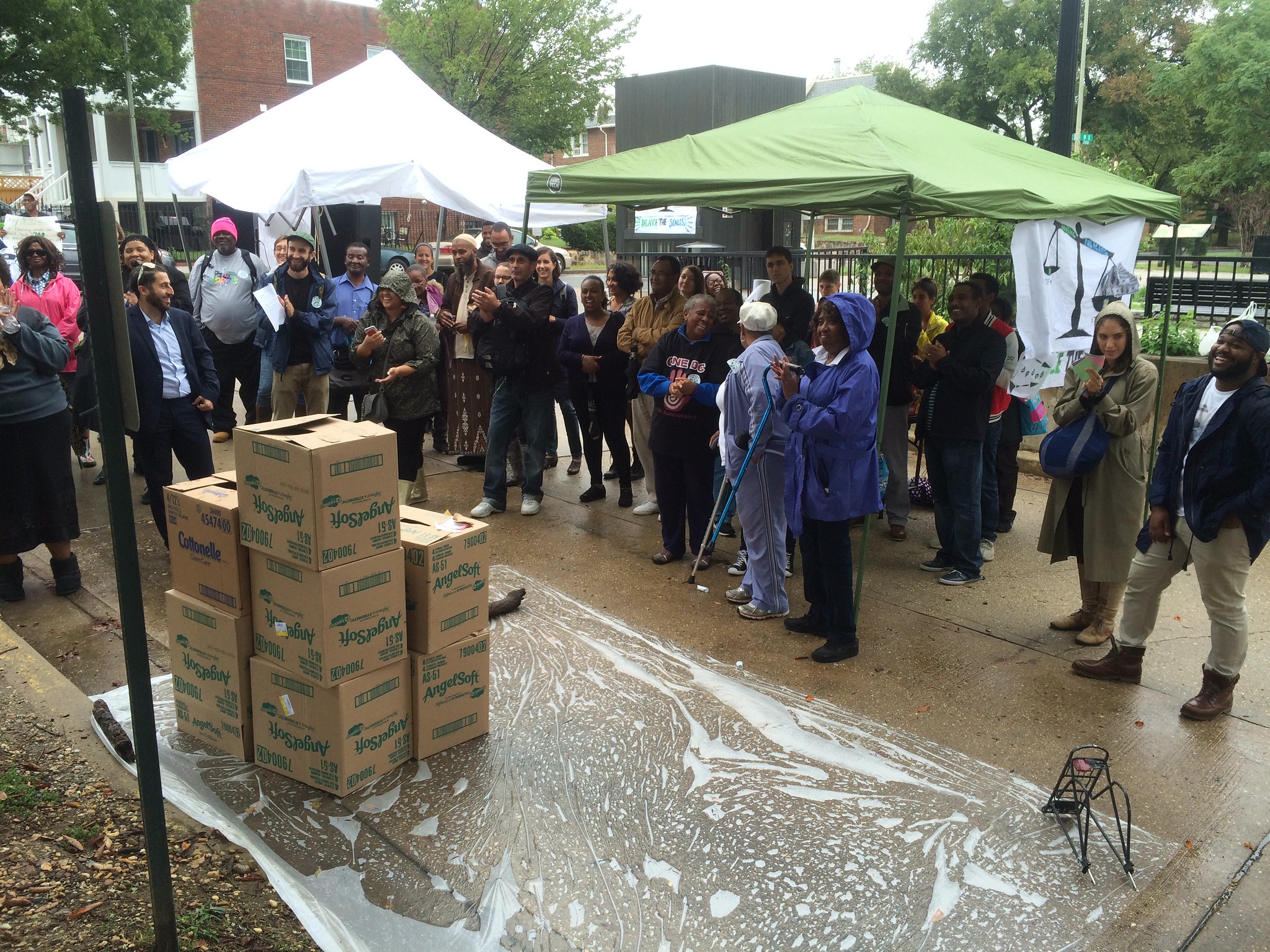 “My caseworker told me I’d have to move out of D.C.,” said Charles Crews, whose father ran as a write-in candidate for the D.C. Council in 2013, to a fervent chorus of agreement. “I work two jobs, I should be able to afford a place.”

As the chants died down, volunteers played music and distributed free sandwiches, bananas and bottled water as protesters signed petitions and held signs at passing cars. The event was punctuated with moments of joy, as neighbors embraced and formed an impromptu dance circle.

Kevin Winky was born in D.C. General Hospital, which has since become a homeless shelter. He said he believes the city can do more to provide affordable housing. “I think that if someone gives you the opportunity to have that kind of power and money, you should work real hard to get it to people who need it.”

Co-organizer John Neagundoeboi said he’s heard many stories of native Washingtonians having to move to the suburbs due to rising rents or a dearth of landlords willing to accept housing vouchers. He said he wishes he could tell those making budget decisions to talk to the community. “You gotta grow and things change, but you gotta involve everyone.” 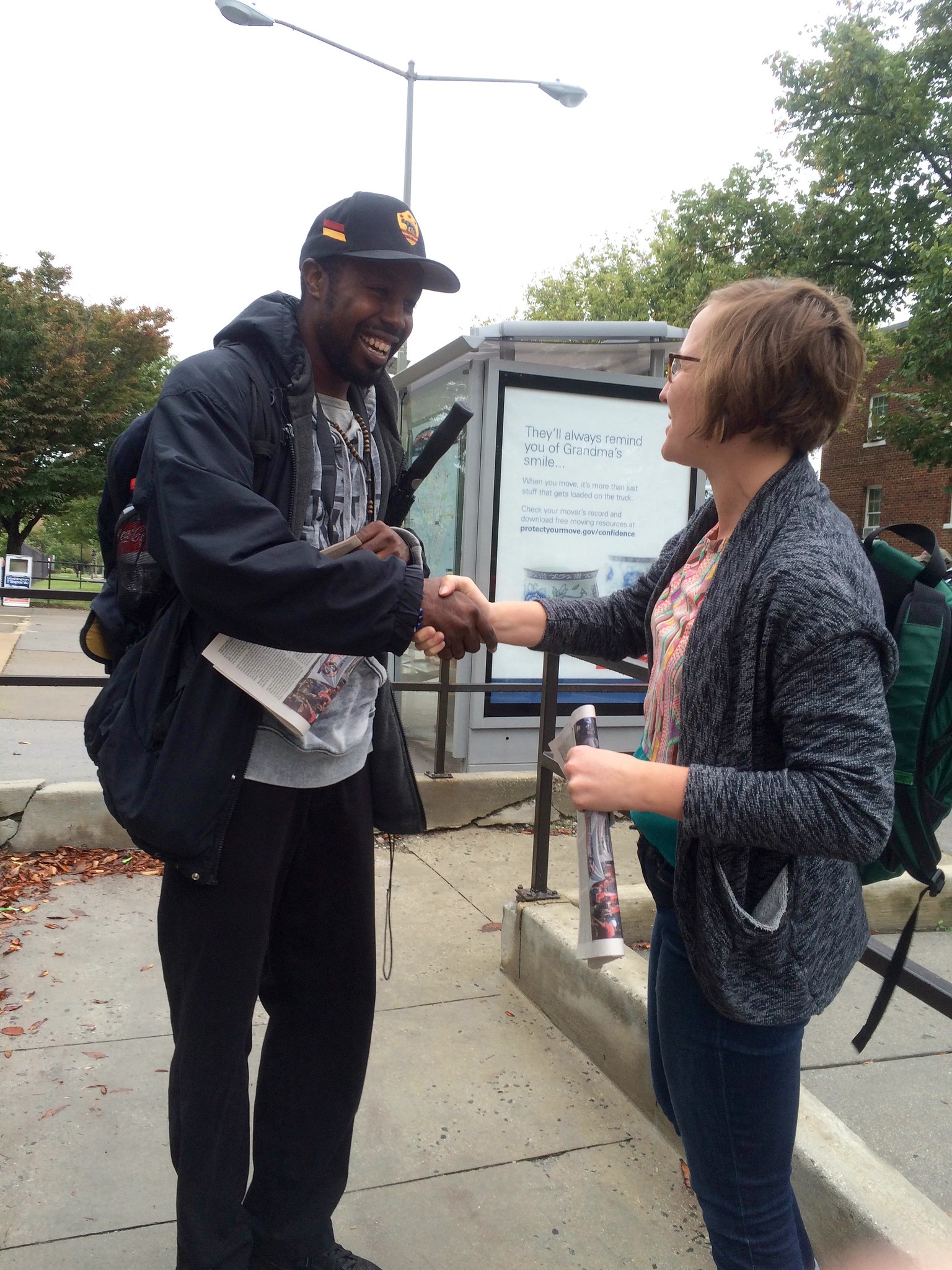 John Neagundoeboi works the crowd after the speaker line up.  Photo by Robyn Di Giacinto

Bowser has long listed affordable housing as a top budget priority, aiming to eliminate homelessness in the District by 2020. This year’s $13.4 billion budget allocated $234 million to various affordable housing programs, which was about $16 million more than last year.

On Oct. 7, city and community leaders broke ground on the Beacon Center, one of the new projects being built with this money. At the ceremony, Bowser announced that in Fiscal Year 2016, $106.3 million was committed through the Housing Production Trust Fund (HPTF). $100 million of this was new funding that Bowser budgeted and $6.3 million was unused HPTF funding allotted by previous administrations but never implemented. A spokesperson from the D.C. Department of Housing and Community Development indicated that this money was now getting through the door because of Donaldson’s aggressive efforts to push projects forward.

“We want a Brightwood that’s inclusive of people of all incomes and that’s why I push for affordable housing,” Bowser said to the crowd. “And it’s not easy, and it’s not enough either, so we as a city, as prosperous as we are, have to continue to focus on how more Washingtonians can participate in this progress.”

Despite this progress, several key programs were left out of this year’s budget. According to an analysis from the D.C. Fiscal Policy Institute, the budget “does not add funds for tenant-based vouchers for families on the DC Housing Authority waiting list, or new rental assistance linked to units assisted by the Housing Production Trust Fund.” 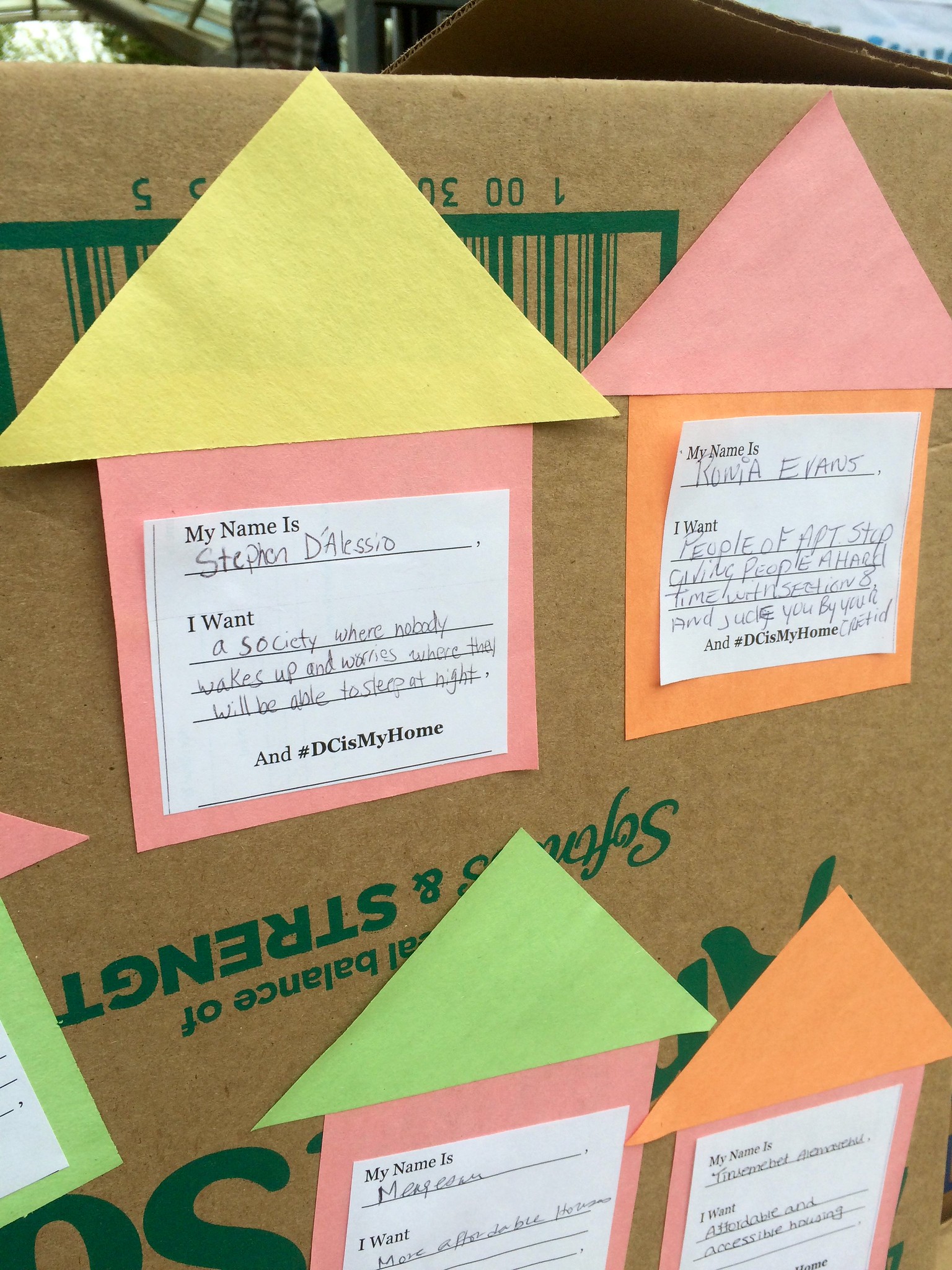 A public art display at the rally.  Photo by Robyn Di Giacinto

An Urban Institute report from last May estimates that it would take between $3.1 and $5.2 billion for the District to end homelessness through 2020.

Organizers said they plan to actively work with elected officials throughout the budget process to ensure their demands are met.

Likewise, Donaldson said Bowser “will continue to hold budget engagement forums throughout the District so that residents’ funding priorities are identified and included in the process.”

An earlier version of this article misstated that a Bowser spokesperson said that $106.3 million was committed to the HPTF last year. Calendar years differ from fiscal years, so it is more accurate to say the funding was committed in Fiscal Year 2016, which ended on Oct.1. The spokesperson was specifically from the Department of  Housing and Community Development. Additionally, the earlier version stated that Charles Crews, quoted, had run for D.C. Council — when in fact it was his father that had run for a council seat in 2013.