When The Overlook at Oxon Run opened in 2010, providing affordable housing to young families and seniors like Florestine Jones, it came with an added perk: free internet. Being able to go online from home made life a lot easier for Jones, who previously traveled from her home in Congress Heights to the downtown MLK Library when she needed to use a computer.

“It’s helped me broaden my horizons,” Jones said. “To have it here without paying for it and at your use every day, it’s just wonderful.”

Over the past decade, public and private efforts have made the internet more accessible to residents like Jones, especially in wards 5, 7 and 8.

While less than 40 percent of residents in these wards had broadband access in 2008, a 2015 report from the city’s Office of the Chief Technology Officer shows that 65 percent now have broadband connections.

Despite the substantial progress, there remains a gap between those who can access the internet and those who cannot. Broadband rates in wards 5, 7 and 8 still lag behind the city’s other five wards, where roughly 85 percent of residents have connections. With technology becoming an increasingly integral part of everyday life, local government programs, nonprofits and private companies are fighting to bridge the persistent digital divide.

In 2011, Connect.D.C. was created to provide technology training, collect broadband data and establish connections with District residents. Federal grants for the program expired in 2015 and it has been locally funded ever since, allowing OCTO officials to continue their work on the project.

“The ultimate goal would be for every District resident to have internet access at home,” said Delano Squires, who manages Connect.D.C.

Squires said one of the main questions facing the program is how to reach people who do not use computers, which are essential for finding job applications, creating professional connections and accessing information.

“In today’s technological world, most people’s first instinct in terms of sharing information is to put it online,” he said. “When you’re trying to reach people who are not online, you need other tools.”

One of these tools is Connect.D.C.’s street team, which has gone to 20,000 houses in targeted neighborhoods over the last two years. The neighborhoods are mainly in wards 5, 7 and 8, where 72 percent of program participants live.

The program’s mobile tech lab has allowed for more direct contact with residents of these neighborhoods. A donation from the D.C. Public Libraries, the converted bookmobile is fully equipped with computers and Wi-Fi.

By providing programs such as financial literacy and small business training, the mobile tech lab exposes people to the ways technology impacts everyday life, a main goal of the program.

“For low-income residents who may be thinking about food, clothing, shelter and health care, if you’re not able to demonstrate why it is relevant, access to internet will get pushed down,” Squires said.

Census data determine where the mobile tech lab can be used to its maximum potential. The program targets areas where less than 60 percent of residents have a broadband connection, according to Squires.

Connect D.C. works primarily with nonprofits and government agencies, but private companies also play a role in increasing public access to technology. Through a collaboration between Capital One Bank and Community Planning and Development Corporation, a new “makerspace” opened June 28 at The Overlook, where Jones lives in the heart of Ward 8.

Pamela Lyons, CPDC Senior Vice President for Community Impact Strategies, said the technologies provided through the makerspace will help residents apply for jobs, connect with family in other cities and set up medical appointments.

“Technology has come slow to Ward 8,” she said. “Having it is invaluable to being able to connect in a world that’s already filled with technology.”

The area will be open to all Ward 8 residents and includes a fabric room for designing clothes, a digital lab with 3D printers, a woodshop with laser engravers and 3D carvers and additional computers. 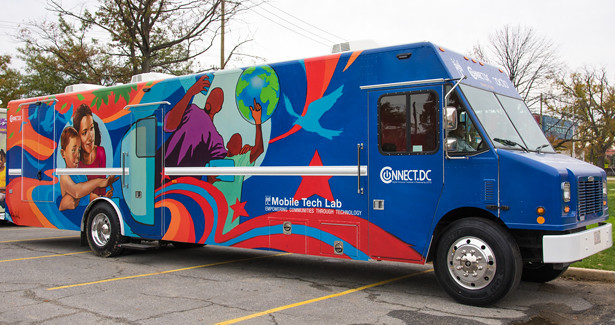 Photo courtesy of the D.C. Office of the Chief Technology Officer

With public and private initiatives aiming to close the disparities across D.C., libraries also play a crucial role in improving digital literacy. Connect D.C. has hosted several events at local libraries, which serve as social and academic hubs for many citizens.

“As we move forward, we’re going to try to coordinate with them even more,” Squires said.

In 2013, D.C. Public Library opened the MLK Library’s Digital Commons, which included 80 public computers and a tech bar filled with tablets, iPads and other gadgets.

Adam Schaeffer, who worked at the Digital Commons, said the library was chosen as the site for this resource because of its location in the heart of the city and its proximity to several public transportation routes. The space attracted many people to the library, but the staff was often unable to accommodate the high demand, according to Schaeffer.

“The space was so large,” he said. “At most you could give people like a minute of your time, and the computer literacy levels were so low that people needed basic stuff like how to use a mouse.”

In addition to looking for jobs and housing, Schaeffer said people used the computers to apply for government benefits, pay speeding tickets and register children for school.

In 2015, the MLK Library opened its Fabrication Lab, an advanced technology lab that included 3D printers, laser cutters and sewing machines. For those with moderate computer skills, the space provided an opportunity to use cutting-edge technology, which Schaeffer said helped many gain jobs.

The MLK Library closed for a three-year renovation in March, which drew criticism from many in the homeless community, according to previous Street Sense reporting.

The closing also dispersed the equipment and staff from the Fab Lab to other library branches throughout the city. In the next few months, Schaeffer and his coworkers expect to reunite at a centralized interim space, which will be used until the MLK Library reopens in 2020.

The instability of public computer spaces further emphasizes the importance of in-home broadband for older citizens. The lack of reliable transportation creates a particularly difficult barrier for them, according to Katrina Polk, the CPDC Director of Aging in Community.

For example, the closest Starbucks and McDonald’s locations — both of which offer free Wi-Fi — are nearly three miles from Jones’ home at The Overlook. Such a distance is too far for many entering later stages of life.