PEOPLE IN THE PARK:
The Man Who Wheeled His Way into The Oval Office

Dennis Schulze spent the month of June traveling 109 miles from Wilmington, Delaware to the White House in his wheelchair. He flew to Wilmington from his home in Beloit, Wisconsin to kick things off.

Schulze is no stranger to long travel and had previously logged more than 400 miles in his wheelchair on similar excursions. Schulze’s journeys, as he calls them, are inspired by fallen law enforcement and military personnel. “I wouldn’t be here without them and their service,” Schulze said in an interview with Street Sense.

He crowdfunds money for five charities he believes in, all benefiting police or veterans. A good chunk of the donations are collected via cash and check while he travels, according to Schulze. Often when people spot his effort they are inspired to donate on the spot and Schulze sets aside the money for whichever of his five charities they choose. He encourages people to give directly to the organizations, but won’t turn down a heartfelt donation.

The ultimate goal of his most recent journey was to get a handshake from Donald Trump on the steps of the White House as a symbol of the president’s support for veterans. Though President Trump ended up being out of town the day the two had arranged to meet, Schulze was invited into the White House for a tour, and given a personalized note from Trump, both of which delighted him.

According to Schulze, the end of his journey was reaching the White House, and a handshake from the president would have just been a bonus.

Since reaching the District, Schulze said he has encountered his fair share of Washington ego. He was unpleasantly surprised to encounter people in suits ignoring him or being outright disrespectful when he asked for directions on the street. The people who Schulze could get to speak to him commonly said to avoid Franklin Park because of the “drugs and hookers.”

But curiosity eventually got the best of him and Schulze had to check out the park at 14th and K Streets NW for himself. Once he got there, Schulze said he immediately felt at home. He was welcomed warmly by the park’s homeless community, or the “people in the park” as he called them. He fell in love with the atmosphere and decided then to sleep in the park rather than going back to his hotel. Meeting some of the very homeless veterans he raises money for inspired Schulze to get to know how they live. 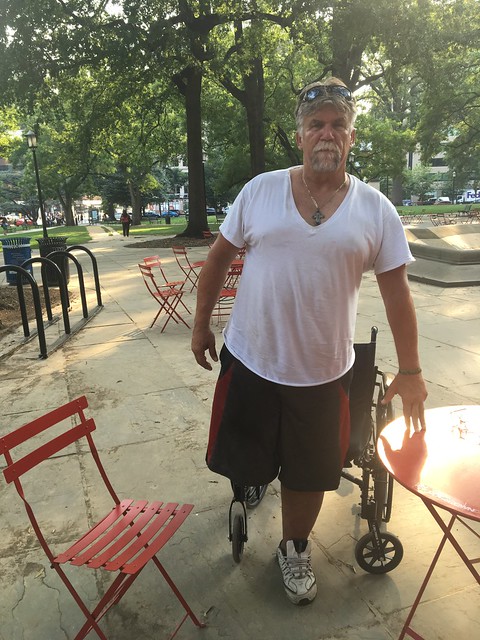 Despite all the bad things he had heard about Franklin Park, Schulze said he never felt unsafe, though he did avoid a portion of the park where there was obvious drug traffic. He wanted no part of the activity, having put his own addiction behind him.

One homeless veteran who met Schulze in the park pulled all the money he had out of his pocket, 75 cents, and gave Schulze 50 cents to support his journey. As the man handed over the donation, he started to tear up. He explained that he wished he had more to give.

“The people who have the less always want to give the most” Schulze said. That 50 cents was one of the most meaningful donations he had ever received.

This brand of sincere gratitude and love fuels Schulze’s journeys across the nation. He described narrowly evading death while working as a truck driver during a collision with another rig. First responders had been forced to amputate his leg on the spot to save his life. Schulze was conscious during the procedure and remembers the officers speaking with him in his most vulnerable moment.

He also carries the spirit of his cousin with him, who was killed in the line of duty.

There are other ways to raise money. But Schulze said he treks hundreds of miles at a time in his wheelchair to inspire the people that he encounters. He wants to show people with disabilities that they are still able to be out in the world. He documents each of his journeys at Facebook.com/handshakejourney and snaps photos with everyone who makes a contribution in order to recognize their kindness.

This is the first profile in an occasional series featuring the people that would be displaced from Franklin Park whenever its intended redevelopment begins.