One Mother on the Impossible Search for Affordable Housing

Daima Lewis and her three children lived for four years in a comfortable house in Frederick, Maryland, in a gated community where there was no crime and the surroundings were tranquil. “I would leave my door open,” Lewis said in an interview with Street Sense. “I will admit, I was spoiled.”

But when they moved to D.C. a few years ago so her two daughters could attend high school at the prestigious Duke Ellington School of the Arts, the dramatically higher cost of living left them stranded without options. Through the process of seeking city safety net programs, Lewis saw what she describes as the dark side of D.C.’s ballooning public housing crisis.

Lewis had a portable housing voucher she had first received in 2005 while living in Binghamton, New York, but quickly discovered that its value didn’t go as far in the nation’s capital.

“When I got to D.C. it was just horrible,” she said. “It was either really awful places or really nice places that the voucher couldn’t cover.” Lewis and her children lived in an apartment in Southeast for three and a half years, where the steady gun violence in the neighborhood was a source of stress.

When they arrived in the District, Lewis could not believe the city where the president of the United States lives had so many homeless people. After relocating for an opportunity that was supposed to be positive for her family, Lewis said falling into homelessness was traumatizing.

Safe housing conditions are simply off limits to those without means, according to Lewis. It seemed to her that people in public agencies charged with helping the poor did not care. “They don’t advocate for you,” Lewis said.

The Promise of Education

It was important to her to keep her family’s relationship strong. “We just stuck together; I tried to make it as comfortable as I could.”  They had meals as a family around the table and tried to do things together.

Her daughters, Kyla and Kyera, both 19 now, were accepted into two Ellington School programs: Kyla in visual arts and Kyera, who plays saxophone, flute, piano and piccolo, in the music program.

Once they got the news in Frederick that the girls were accepted at the D.C. school, they spent nine months looking for housing in the District. “That transition interrupted everything,” Lewis complained. The family lived out of suitcases. When the city identified a unit they could help her with, officials first told Lewis the apartment would be ready in a week. Then two weeks. Then it failed inspection.

She remained optimistic, for the time being, about finding decent, affordable housing.

Lewis initially worked as a substitute teacher at Ballou High School and at a couple of elementary schools in the District. But she lost the job because the school administrators said she had been too stern with an unruly student. Her contract was not renewed.

In need of a place for the family to stay, she tried going to the Virginia Williams Family Resource Center on Rhode Island Ave. NE. Lewis was shocked by the sheer number of young mothers there. “It was sad: babies crying — they were hungry, they were hot.  You endure it because you need a place to stay,” she said. 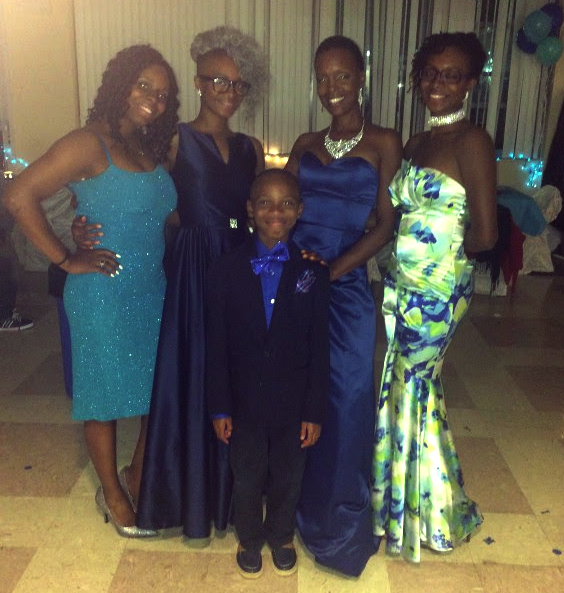 Daima Lewis (center-right) with her family in 2015. Photo courtesy of Daima Lewis

After ending up back on the street despite pursuing service at the Family Resource Center, Lewis called the office of then-Mayor Vincent Gray and threatened to bring her children and sleep in his office. The staff pleaded with her not to and gave her contact information for the Georgia Avenue Family Support Collaborative in Northwest. “Just don’t come down here with your kids and sleep,” they said, according to Lewis.

Service at the Georgia Avenue Collaborative was an improvement. They told her that if she could prove who she was and where she was from, they would do their best to help her.

She explained that her Section 8 voucher had been transferred from Frederick to D.C. and that she had worked for the Federal Aviation Administration in a town called Boonesboro just north of Frederick County, Maryland. Lewis was finally placed in a shelter for one week before being moved to a Days Inn. Part of the hotel was dedicated as overflow for D.C.’s family homeless shelter but it was not maintained well. She said they all suffered bug bites while staying there.

Lewis had survived poor conditions before, growing up in New York City and going through foster care. However, her children were not ready for any of this. “My kids were devastated when they were in the hotel; they had not experienced it,” she said.  “It was an awakening moment [for them] … I grew up with roaches.”

The Lewis family was eventually able to move into an apartment in Southeast near historic Anacostia. Looking back, Lewis thinks she at least had a better experience than a lot of other homeless people, such as those stuck in the family shelter at the converted D.C. General Hospital. She said it was not hard to imagine how people confined for a long time to a hotel or hospital room could develop mental health issues.

“It’s tolerable to a degree; you get used to it,” she said of the apartment. “But it’s bad because you don’t want to be at home; you should want to be in your own home.”

Lewis loves to cook but hesitated in the apartment because it frequently had mice. That was one of the small issues. The apartment building is at least 100 years old, has a bad furnace, has severe maintenance issues and has failed several inspections, according to written testimony Lewis gave before the D.C. Council Committee on Housing and Neighborhood Revitalization during a May 5 meeting to consider the public housing crisis. 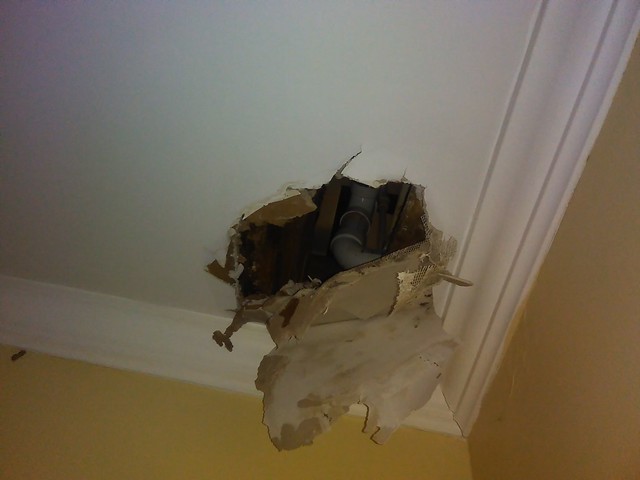 Her family had to evacuate the apartment during their first six months there because of carbon monoxide leaks. The pollution compelled the fire department to take them all to the emergency room, she testified. Then, a consistent plumbing leak in both the living room and dining room ceilings caused a large hole to form.

The D.C. Department of Consumer And Regulatory Affairs made the landlord fix the leak. Because it was shown to be deteriorated, the landlord was required to replace the unit, she said.  The family went back to the apartment about three weeks later.

But instead of the landlord paying contractors to fix the plumbing, he sent somebody to patch the hole and repaint it two or three times a year. Lewis’s children were still getting headaches and becoming nauseous. 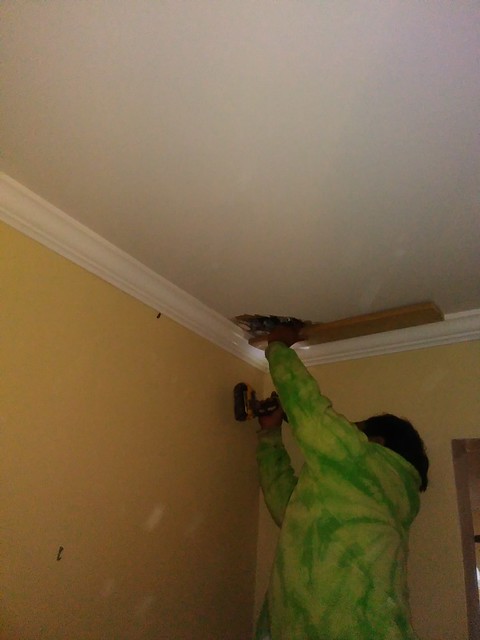 A repair man covers the hole in the ceiling with two two-by-fours. Photo courtesy of Daima Lewis

“If he can convince an inspector on a cursory inspection that the problem ‘appears’ to be fixed, he passes inspection and continues to collect state funding,” Lewis said.

The woman who lived there before the Lewis family was said to have died of an asthma attack. But Lewis suspects instead that it was a problem with the house — she has also had breathing and asthma problems since they moved in.

“I really believe there’s something going on in that house that is affecting my health,” she said.

Her testimony for D.C. Council gave a sweeping indictment of the “loopholes and inside deals” that she said enable slumlords to continue to receive payment for units that are unsuitable to be occupied — because people don’t have any other options.

In early August, the Lewis family left the apartment, split up and started couch surfing with family and friends. Their former landlord had never fixed the plumbing issues and the unit flooded with every summer rain, according to Lewis.

She argued that public agencies here need to hold landlords who provide affordable housing accountable for the safety and generally good condition of these housing units. Because of this cycle of economic hardship, those with little means are “locked in” to living in certain undesirable parts of the city. They also are perceived as ignorant or not deserving of living in places that are in good condition, according to Lewis. 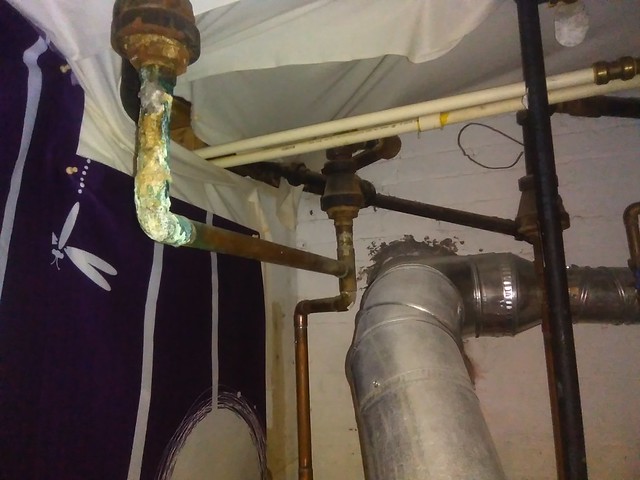 She thinks it is critical to provide decent housing for all people in the city, affluent or not, and to preserve and restore existing affordable housing.

“Now is the time to unite. The current political climate is hazy, which affects the people on the bottom the worst,” Lewis said. “But the people united will never be defeated. If we want to survive this, we need to come together.”

She said the best way for public agencies to show the District residents that they are not part of a deliberate effort to displace low-income families is to advocate for sufficient funding and programs to ensure those people have adequate housing and a decent standard of living.

Happily for Lewis, after graduating from the Ellington School both of her daughters received full academic and athletic scholarships to college. Kyla started Virginia State University in the fall of 2016. She’s majoring in business, minoring in music and is a long-distance runner on their track team. Kyera took a year off and is working at a Starbucks at the Navy Yard. The family continues to stay with others while they wait on a September 1 move-in date for their next affordable unit. 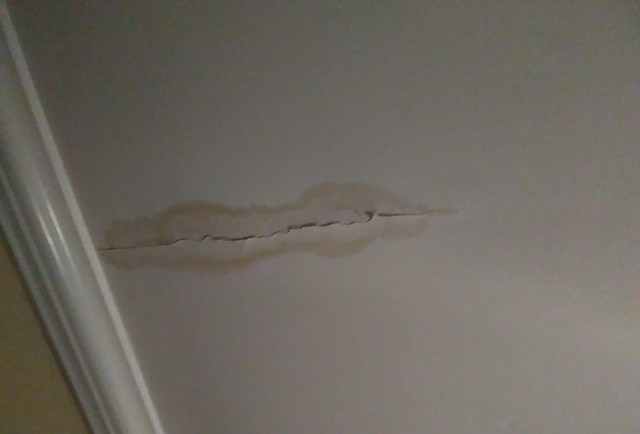