New Shelter for Women to Open in Chinatown

The Patricia Handy Place shelter for women held its ribbon cutting ceremony on February 10. The new facility, located in Chinatown at 810 Fifth Street NW, will replace two low-barrier women’s shelters that were housed in the Federal City Shelter building at 425 Second Street NW. The Second Street location is where the Community for Creative Nonviolence (CCNV) and several service providers have operated for 30 years out of a building obtained through the advocacy of the late Mitch Snyder and other activists. As one of the largest shelters on the east coast, these organization have provided beds for up to 1,350 men and women at a time.

The building where this brand new shelter will be located used to be the Gospel Rescue Mission. The Mission was a shelter that asked residents to pay a small fee or do volunteer work to secure a space. In 2013, Gospel Rescue Mission merged with Central Union Mission in a smaller facility on Massachusetts Avenue Northwest. 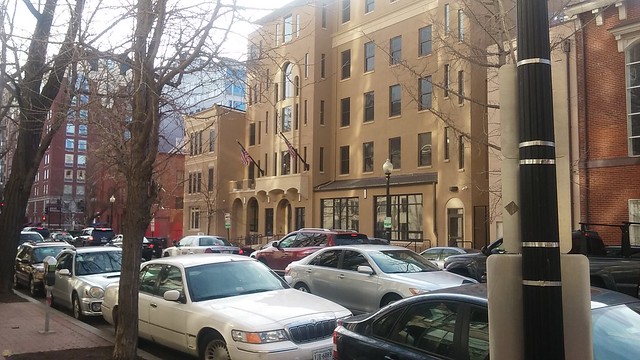 The Pat Handy Place for Women, in the former home of the Gospel Rescue Mission. | Photo by Reginald Black

The brand new Pat Handy facility is a great step up, boasting a pantry on every floor and ten beds to a room on the four low-barrier floors. The shelter also offers single bedrooms on the fifth floor and a huge multipurpose room in the basement. The women will be able to receive mail there. A conference room can be used by residents and potentially by District officials to discuss homeless services and engage residents.

The Patricia Handy Place for Women will provide 213 beds for single women beginning in March. This will replace the John L. Young and Open Door shelters, which served a maximum of 195 women at any given time. This move brings into question the future of CCNV, but it is a sign that the administration might be ready to tackle homelessness head on.

In 2014, a city task force met throughout the year to discuss the future of the Federal City Shelter properties, which include the shelter and an adjoining parking lot on prime downtown real estate. An official set of guidelines was passed three weeks prior to Mayor Bowsers’ inauguration. But no official plans have been publicized. The Homeward DC 5-year strategic plan lists CCNV capacity as “To Be Determined.”

“People have worked for decades, sometimes unnoticed,” Bowser said at the ribbon cutting event. “They are the ones who are getting the hard work done for people. My team is very focused on how a prosperous city can give people a shot, a second chance.”

All of the city’s housing and homeless big leagues, past and present, were on hand for this event. Including Patricia Handy’s father, Dr. Perry Handy.

Dr. Handy described in detail his daughter’s relationship with the shelter hotline. The hotline assisted those people who would not seek the comfort of a shelter. Workers distributed blankets, food, water, shoes, boots, and provided medical attention for referrals. Throughout her career, she was able to assign people to permanent living spaces in apartments and to provide preliminary mental health assessments.

“I would like to express my gratitude to honor my daughter,” he said. “Patty would be so pleased for this occasion. Her calling in life was caring for the homeless,” Handy said.

Many of the speakers discussed Patricia Handy’s dedication to service throughout her lifetime. She worked for the government for 32 years, with 9 of those having a focus on homelessness. Bowser commented that naming this shelter after Patricia Handy marks the third time in her government career that a building has been named after a government employee. All the speakers reiterated the message that Pat Handy worked persistently and passionately to elevate the lives of people experiencing homelessness.

With a new single women’s facility on the way, hopefully Washington is heading away from the extreme gentrification that is taking many communities by storm, to a place where everyone does get a fair shot

Emily Kaye contributed to this report.

Facilities at the Pat Handy Place for Women. | Photos by Reginald Black