That was the overarching theme of the feel-good Housing For All NOW Rally on Saturday, Feb. 1. Hundreds of people from all walks of life gathered at the Calvary Baptist Church in Northwest to stand together for affordable housing in Washington, D.C.

Starting off the rally was John Adams, a Catholic priest and president of So Others Might Eat (SOME,) an interfaith organization that has been providing housing to poor and homeless families and singles for more than two decades. Adams offered encouraging words to the crowd., but he was also quick to note that 30,000 affordable housing units in the city have been lost in the last 10 years.

The event picked up momentum when Housing For All organizers Venus Little and Tom Wilson took the stage and asked attendees to introduce themselves and announce which organizations and communities they were representing at the rally. Groups from all around the church rose to their feet and proudly shouted out why they were there. Each was welcomed with a round of applause.

The rally featured emotional moments as the winners of the Home is Where the Heart Is writing competition read some of their work to the audience.
Youth winner Alaya Barnett described the beautiful feeling of having a home in her poem:
“The house of my dreams, the house that fits my needs, the house of my dreams.”
Another youth winner, Gabriel Merino, wrote about his gratitude for affordable housing and spoke of his dream of attending college. Also taking honors in the youth category was Jabari Jefferson. Adult winners were Elsie Collins, Judith Overby and Samar Chatterjee.

Other speakers shared powerful stories about housing programs that have changed their lives for the better. Anthony Davis took the stage with his 6-year-old son and his son’s mother. The family received an apartment through a local permanent supportive housing program (PSH). .

Such programs provide safe and stable housing as well as services to help residents find work and address other needs. While Davis said he is still unemployed, he spoke of the importance of expanding permanent supportive housing efforts citywide.
“I think it accomplished understanding of what is trying to be done, and where they are trying to go,” Davis said. “I mean, we all know there is still work that needs to be done. We all know that it’s not only just up to the council members, but it’s up to us too to keep on moving forward and not looking back.”
At the time of the city’s 2013 Point-In-Time homeless count, 3,690 formerly homeless single men and women and 983 formerly homeless families had received homes through permanent supportive housing efforts

D.C. Mayor Vincent Gray and city council members Jack Evans, Jim Graham, Tommy Wells, Anita Bonds and Muriel Bowser fielded questions from the audience about their stance and plans of action for affordable housing. Gray reminded the crowd of his plan to spend $187 million to create and preserve affordable housing units throughout the city. Last year, Gray, who is running for reelection against a wide field of contenders that includes several city council members, unveiled a long list of projects scheduled to get funding under the affordable housing initiative, which aims to provide more than 3,100 units.

Among the projects included in the initiative are the construction of a 120-unit complex called Metro Village on Spring Place in Northwest; the rehabilitation of the 183-unit Parkway Overlook apartments in Congress Heights and the 198-unit Benning Road project being developed by SOME. Yet analysts point out that even if all the currently slated projects are completed, they would bring the District less than one third of the way to the mayor’s goal of creating or maintaining 10,000 affordable units by 2020. That goal was set by an affordable housing task force convened by the mayor last year.

At the Housing for All NOW rally, Davis said he too wondered if the city’s big plans for affordable housing would be fulfilled.
When asked about whether he believes in the plans, Davis said, “I do, and I don’t, because it’s easy to say it. It’s hard to do it. I can’t say it won’t be done, because so far it has, and it has been coming along. But is it going to keep going?”

The rally closed with Elizabeth Falcon of the Housing For All Campaign and David Bowers of Enterprise Community Partners encouraging the crowd to stay involved with the program and help in any way they can.

The efforts move forward with Housing For All Campaign advocacy training programs on Feb. 18 and Feb. 25 at the Petworth Library, located at 4200 Kansas Ave. NW. 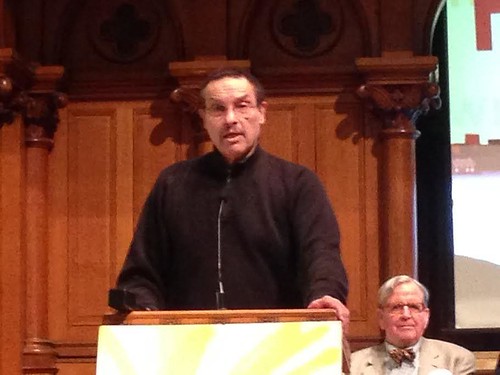 Mayor Vincent Gray speaks at the Housing For All NOW Rally. | Photo by Tommy Chalk