More than 200 people demonstrated outside D.C. Council on Jan. 26, protesting President Donald Trump’s then-planned order to ban immigration from some Middle-Eastern countries and his executive order to build a border wall along the U.S.-Mexican border and increase enforcement of immigration laws.

The D.C. Justice for Muslims Coalition, which, according to a report by DCist, includes the Washington Peace Center, the Muslim American Women’s Policy Forum, Collective Action for Safe Spaces, the National Coalition to Protect Civil Freedoms and Hindus for Justice, demanded that the D.C. Council go beyond the resolution introduced Jan. 24 affirming the human rights of District residents and reiterating D.C.’s status as a sanctuary city.

The coalition asked that the Council and the mayor preserve Washington as a sanctuary city for Muslim communities, in part by issuing a statement that D.C. will not comply with orders to ban Muslims, create a Muslim registry or criminalize Muslim organizations.

“While it is commendable that the D.C. Council has passed a resolution affirming the human rights of the District’s residents, it is important to note that for many of our communities, our rights are stripped by the law and it is the law that upholds our dehumanization,” said Darakshan Raja, co-director of the Washington Peace Center. “It is not enough to give lip service,” she said.

The statement Raja read also called on the Council to fund refugee resettlement programs, prevent the Metropolitan Police Department and Department of Corrections from engaging in immigration enforcement or sharing information with federal authorities, and block the implementation of registries of people investigated for national security purposes. Finally, the coalition demanded that the D.C. government prevent the loss of benefits for marginalized groups that depend upon them.

The protest was in response to Trump’s reported plans to block immigration from Iraq, Libya, Somalia, Sudan, Syria, Yemen and Iran, as executive order that has since passed to tighten border security.

Muslim American Women’s Policy Forum, which organized the rally, also asked citizens to call into the D.C. Council and the mayor’s office on Jan. 26.

As wind violently whipped the flags outside the Wilson Building back and forth, organizers requested solidarity with targeted groups, including Muslims, immigrants and refugees. Speakers from Black Lives 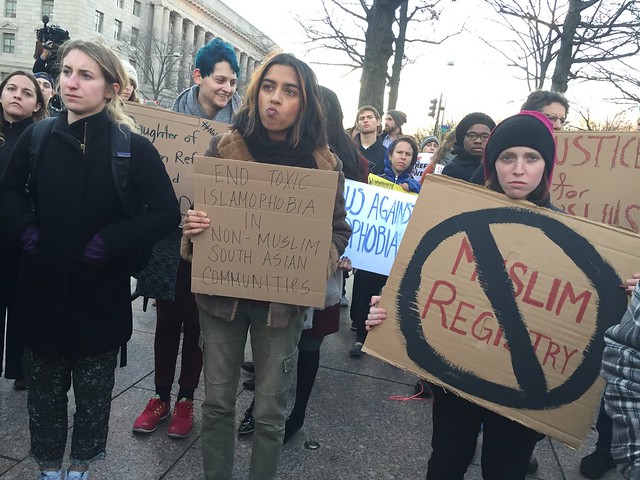 Councilmember Robert White appeared at the beginning of the rally to assure protesters’ that he will protect D.C. residents, standing up for Muslims, LGBTQ people and Latino people.

“We represent America, we look like America,” he said. “I want you to know that as one of your representatives on the City Council that I stand with you and I know my colleagues stand with you.

Noor Mir, a member of MAWPF, recounted the March 2016 story of a police officer at the Shaw Public Library who intimidated a a Muslim woman wearing a hijab, demanding that she remove her headscarf. She called for lawyers and interpreters willing to volunteer their services to help those facing deportation and for the establishment of local safe spaces in community centers and churches that could serve as havens for Muslims and other immigrants.

Mir also explained what a Muslim registry would look like, describing the National Security Entry-Exit Registration System, a system developed after Sept. 11, 2001 that tracked non-citizen men from 25 Muslim majority countries and South Korea. Although the policy ended in 2011, the Penn State Law and Rights Working Group found in a 2012 report that NSEERS resulted in 13,000 deportation proceedings. She told non-Muslim listeners not to volunteer to register themselves for any future Muslim registry, saying it would be ineffective.

Government Affairs Manager for Jewish Voice for Peace Rabbi Joseph Berman read a passage from the Torah describing the treatment of the ancient Israelites at the hand of the Egyptian pharaoh. After recounting how midwives disobeyed orders to kill young Israeli boys at birth, he led the crowd in a chant: “Be like the midwives! Resist Pharaoh! Choose life!”

April Goggans, an organizer with Black Lives Matter DMV, told the crowd not to depend on the government for protection. “Will our actions match our words?” she asked. “People need to access how far they are willing to go to liberate and protect each other.” She referenced the consequences for D.C. if the Trump administration follows through on threats to defund sanctuary cities. 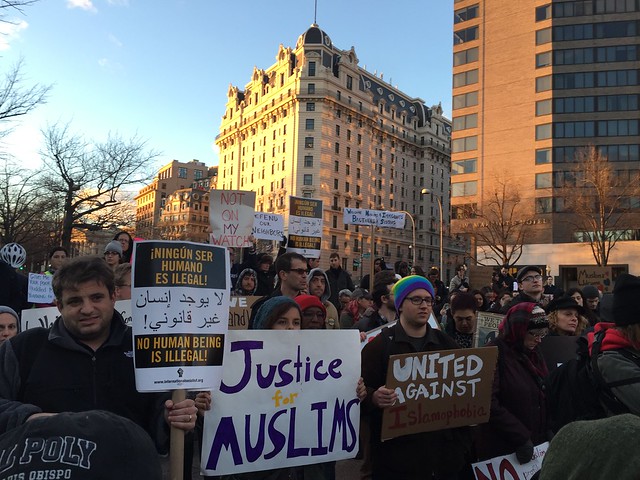