Report shows “Me Too” stories are a constant among homeless women

At Calvary Women’s Services in Anacostia, Courtney has been trying to catch up on what the rest of the world has been doing in the last few years. She has battled addiction and housing instability. She left an abusive relationship. Now, she reads, writes, watches Netflix — she just finished “Bloodlines” — and has dreams of starting a career as a tattoo artist and shop owner.

Courtney has been homeless in Kentucky, Ohio, and the District. While she was living in Kentucky in 2016, the man she had been staying with became violent with her. Soon after, her cousin bought her a bus ticket and she returned to D.C., where she was born, with no plan for what to do when she arrived.

Her struggles with domestic violence and homelessness are not uncommon. According to a report by the D.C. Interagency Council on Homelessness, 42 percent of homeless women in D.C. have been victims of domestic violence, and nearly one-third of women surveyed indicated that the violence they faced was a direct cause of their housing instability and homelessness. Sixty-three percent of the women who reported histories of violence and trauma said they also experienced at least one act of violence against them during their current period of homelessness.

“I was a ‘Me Too’ at a young age and at an older age.” Courtney said, referring to the popular movement encouraging women and girls to speak out about their experiences with sexual harassment and violence. “So I appreciate not feeling alone. Even the small things that people don’t realize, like someone touching you the wrong way — you don’t know how that makes me feel. So that’s ‘Me Too.’” 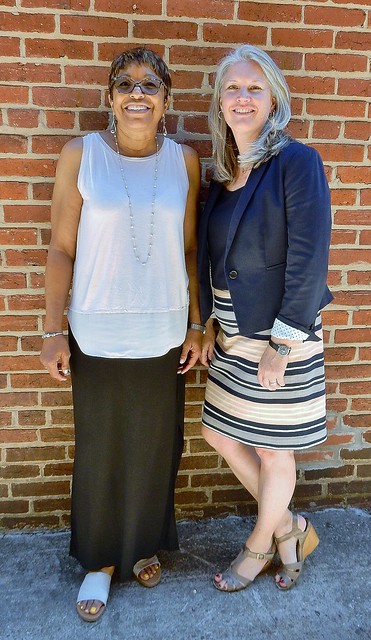 The Women’s Task Force designed the survey with the help of domestic-violence service providers from around the nation, including a work group that previously designed a similar survey in Los Angeles.

“We are trying to get a deeper look at women’s experiences, particularly around the areas of violence and trauma,” Thomson said. “The starting point needed to be taking a deeper dive at looking at the issues and needs of women who are homeless in our community. Doing that first would set the stage for what sorts of advocacy we need going forward.”

The results of the D.C. survey showed that 29 percent of participants reported they had engaged in survival sex, which refers to sex in exchange for extreme needs like food, shelter, or addictions, in their lifetime and 28 percent had been forced or threatened into sexual activity. Of that 28 percent, a third had been trafficked.

Courtney, who identifies as a lesbian, began a relationship with the man who became abusive with her in order to finance her own addiction. After leaving that relationship and returning to D.C., she lived in two treatment centers before entering Calvary. Courtney credits her case manager, Rachel, for getting her into the center.

“She called [Calvary] almost every other day and eventually she called me and said ‘I got you an interview,’” Courtney said. “It was so great because I was just about to be out of my extension at the rehab, so I’d have been back where I was, and that wasn’t okay.”

Calvary is a women-only facility, something that three out of four women surveyed reported they preferred for obtaining physical and mental health services as well as shelter. Being in an environment with only women made the transition much easier for Courtney, who suffers from Post Traumatic Stress Disorder.

According to the survey, 72 percent of participants self-reported that they are currently experiencing mental health issues including depression, anxiety, trouble sleeping, and thoughts of self-harm.

“When one has experienced trauma and violence, they are more likely to have depression, anxiety, and post-traumatic stress experiences,” Thomson said. “The report really does try and point out that women who have had those long histories are the same women who are currently experiencing mental illness.”

Thomson and Steptoe are hopeful that the results of the survey will lead to more investment by the mayor and D.C. Council in services for women who are experiencing housing instability, homelessness, and/or are victims of domestic violence. 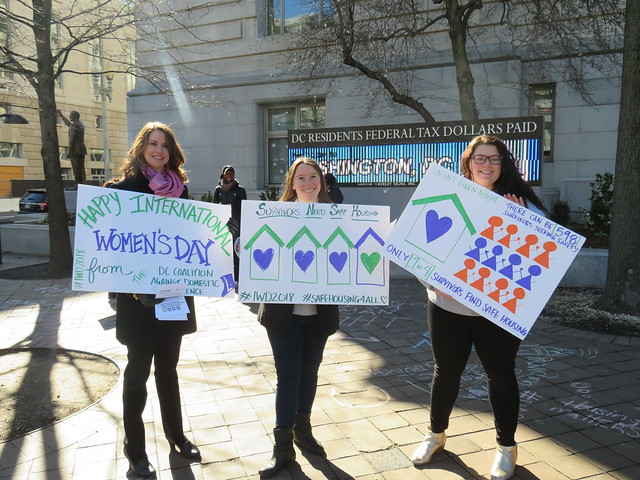 On March 8, International Women’s Day, activists wrote statistics from the 2017 D.C. Women’s Needs Assessment Report in chalk on the sidewalk in front of the Wilson Building for the city’s elected leaders to see. Photo by Ken Martin

The Women’s Task Force is now looking to create a model of trauma-informed care and specific trauma resources for women’s providers, according to Thomson. Providers would follow this model to deliver individualized care for women seeking help.

“We are offering things like therapy and group work as ways for women to engage with their experiences with violence and trauma,” Thomson said. “We want to make sure that women have access to the resources that are available in our community.”

For Steptoe, the greatest need for women experiencing homelessness who are victims of abuse is more specialized housing. For this to happen, she says, the District government needs to be made aware of the survey results and the dangers that homeless women in D.C. face in regard to sexual abuse and violence.

“It needs to be brought to the attention of the council and those people who can actually change the law so that there is more funding available,” Steptoe said. “None of this is going to happen without funding.”

Courtney, Thomson, and Steptoe each echoed the sentiment that ‘Me Too’ is a movement that affects women from all backgrounds. An objective of the ICH Women’s Task Force is that the survey results will raise awareness about homeless women’s experiences. Greater awareness in the D.C. community will hopefully lead to more resources being implemented to help these women recover from their trauma, according to Thomson and Steptoe.

To women currently facing domestic violence, especially women experiencing homelessness, Courtney shared advice she gained from her own experiences with both: “Don’t give up. It might seem really hard, but just never, ever give up.”