McMillan Park is a 25-acre parcel of land near the large medical complex that includes Children’s National Medical Center, Medstar Washington Hospital Center and the Veterans Affairs Medical Center. The Ward 5 site, which is bordered by North Capitol Street, First Street Northwest, Michigan Avenue, and Channing Street Northwest, was once part of a 92-acre Reservoir and Filtration Plant. The land has been unused since 1987.

The historic row houses across from the park have had the same view for decades: a chain link fence that was erected during World War II when the U.S. government feared someone would attempt to poison our water supply. The fence was built with the promise that it would come down, but it has remained a constant in the lives of the residents of the Bloomingdale and Stronghold neighborhoods.

Now, after 28 years, the Office of the D.C. Deputy Mayor for Planning and Economic Development (DMPED) and partner developer Vision McMillan Partners (VMP) expect to break ground in 2016 on a long disputed redevelopment plan.

McMillan Park was designed by Frederick Law Olmsted, Jr, and built in the late 1800s as a public park. Olmsted designed the site to be part of the “Emerald Necklace,” the series of parks that surrounded D.C. The park was named after Michigan Senator James McMillan, who helped plan the park and reservoir as part of a city beautification project in the early years of the 20th century. The park was one of the first integrated parks in the city, and was enjoyed by both Black and White families.

The U.S Army Corps of Engineers had jurisdiction over the land and built a tunnel to bring water tp eastern D.C. The new reservoir was named McMillan Reservoir in 1906. The McMillan Reservoir became the site for a Slow Sand Filtration Plant; the site still contains the underground cells and tunnels that once were used to filter water. The park became neglected when the plant was replaced in 1986 by a chemical treatment facility. Some of the cells and tunnels have withstood years of weathering and neglect, and McMillan Park is included on The National Register of Historic Places.

The park was purchased by the District from the federal government in 1987 for $9.3 million dollars. The Army Corps offered to sell the land to the District for $1 if the city agreed to use the site as a park, but the District chose to buy the land at market price with the intention of allowing its development. McMillan Park has remained closed and undeveloped since its purchase.

For Kirby Vining, McMillan Park is a source of both fascination and frustration. In 1989, when the District was considering a plan to use the land to build a K-Mart Department Store, Vining became involved in an effort to save McMillan Park. The land was also being looked at as potential location for a jail, but those plans were halted due to community opposition. Vining is now involved in the McMillan Advisory Group and Friends of McMillan Park, two community groups actively dedicated to saving the park.

Today’s effort to “Save McMillan” today is complicated. The existing space is fenced off and cannot be used by the community. There are “No Trespassing” signs on the fences and there is no legal way to enter. The space has not been used as a park for decades. Consequently, the “Save McMillan Park” movement has been criticized for its choice of words.

“That’s as much as we could fit on a button or a sign. It would be [be accurate to use the words] ‘revitalize McMillan Park consistent with the community wishes, the current zoning laws, the comprehensive plan, and the historic status of the sight.’ But how do you get that into four words?” said Vining in an interview with Street Sense.

In 2006 the District instructed The National Capital Revitalization Corporation (NCRC), an agency created to develop public properties in the city, to issue an open solicitation to developers to to assist in the beginning stages of McMillan Park development. The NCRC selected VMP, which is comprised of three firms: EYA, Jair Lynch Development Partners, and Trammell Crow Company, to work on “Phase One” of the Development Plans.

In 2007, before Phase Two (solicitation of bids, selection of additional developers and implementation of the Master Plan) could be set in motion, Mayor Adrian Fenty disbanded the NCRC and placed DMPED in charge of McMillan Park. VMP sought exclusive rights to develop the park and the city granted VMP the right to buy and develop the land without soliciting bids from other developers.

Members of the community around McMillan park created the McMillan Advisory Group (MAG), and the city authorized MAG to work with VMP to address concerns the surrounding neighborhoods had about redevelopment plans. The relationship between MAG and VMP grew tense, as both groups had different ideas for how the land should be used. VMP wanted to utilize the space as much as possible to develop it, while MAG wanted more green space than VMP had planned. As time went on, many members of MAG have been concerned that VMP has not communicated with them effectively about the development plans for the park or taken the needs and desires of the community into account.

“VMP should be challenged, they have not actively worked to negotiate with community groups….they gave presentation, and there was only three minutes for community input,” MAG meeting minutes of October 9, 2014 state.

VMP has not attended a MAG meeting since December, 2014.

Gilles Stucker, the DMPED McMillan Park Project Manager, did not agree with the criticism of DMPED. “DMPED attends the MAG meetings to present the information they receive directly from the developer and District agencies. It has been both effective and valuable to have the District present this information and for the community to hear it directly from the City. We wanted to create a positive environment that promotes dialogue. We also provide information from the MAG to others,” Stucker said in an interview with Street Sense.

Between the Preserved Cell, the two “Healing Gardens,” two walkways, a courtyard, and the central park, the VMP-sponsored Envision McMillan website states that the total green space will be 10.2 acres. The park was originally going to be significantly smaller, only 2.3 acres, but VMP changed the acreage size after listening to the community.

The grassroots organization Friends of McMillan Park continues to oppose the plan, believing the plan should include more green space and attention should be given to preserving the historic aspects, especially the underground cells. Vining sees the potential in the land to be a community park, as it was before it was fenced off.

Friends of McMillan Park is also concerned that as proposed, the development will cause an influx of traffic. The area that surrounds the park already experiences heavy congestion daily.

Many in the community were outraged; because VMP is paid by DMPED, it appeared that tax payer money was used to support the Create McMillan Park PR campaign to challenge Save McMillan Park, which they saw as an organic community grassroots organization.

The money was quickly returned to the city after campaign documents surfaced.

Despite the past tensions and controversy, Mayor Muriel Bowser’s administration has its eyes set on the future and the potential for developing the site. Ward 5 Councilmember Kenyan McDuffie supports the project. McDuffie has lived across from the McMillan Park for most of his life and has never experienced it as a functional asset to the community.

“The site has been completely unproductive in my lifetime….My support is because as a resident and neighbor I want to see the fence finally coming down,” McDuffie said in a June 23, 2015, interview with the New York Times.

Most of the DMPED employees who were the first to work on the McMillan Park project have since retired or moved on. Stucker has only been involved with the project since December of 2014. Stucker and the current administration’s vision for the space is for it to be utilized for affordable housing, new jobs for D.C. residents, and local and small business opportunities.

In an interview with the New York Times, Mendelson said he would like to see more of a park, but “the horse left that barn a long time ago…it’s too late to be unwinding that deal.”

However, Friends of McMillan Park doesn’t agree with the Bowser Administration’s plans to move forward with the project or put the past behind them. 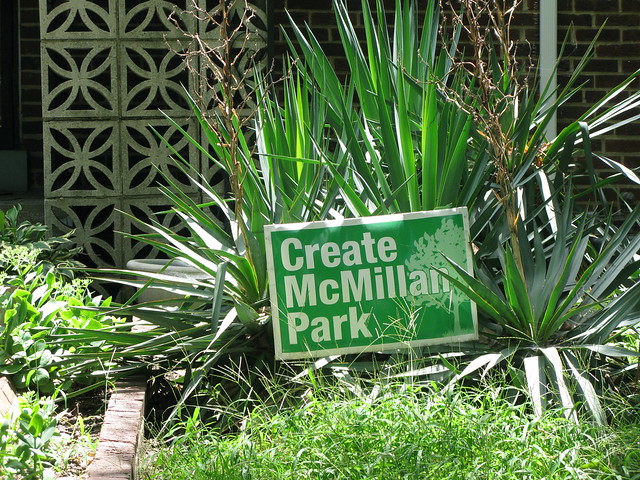 A point of concern for Vining and for Friends of McMillan Park is the height of the proposed structures. The neighborhood across from the park is made up of historic row houses, which are by no means tall. The park has views of the Washington Monument and the Capital. Vining was dismayed to see the tall building get cleared by Zoning, especially when he believes so much of the underground space could be used, as opposed to building up.

Stucker disagrees with Vining. “The Historic Preservation Review Board, Zoning Commission and National Capital Planning Commission determined what could be done with the land. The taller buildings in the plan will be on the North side of property. The North side of the property is near the existing hospital buildings that are taller than the existing row houses on the South side. The lower structures in the plan will be on the South side of the property,” Stucker said in an interview with Street Sense.

Friends of McMillan Park has filed appeals against the “bogus Zoning Commission decision that will result in the destruction of our park,” according to the group’s Facebook page. They hope to halt the impending groundbreaking and see that the development plans are revised.

“I would prefer this fence stay up until the city says ‘Hey we have some laws that prevent you from doing this [allowing buildings over one hundred feet in the area],’” Vining said.

Vining believes the current situation may have been different if the community had been given the opportunity to be involved in the earlier stages of development.

“I think that with an open RFP which includes bidding and competition, we’d be able to see what is possible, and have…several companies…showing different angles to try to get government and community support. We’ve had none of that with VMP. We got ‘here’s the plan, tough luck, we didn’t consider anything else,” Vining said in an email to Street Sense. Recently, the District has been working to reform its RFP process to include more community involvement. However, the plans for McMillan Park appear to be set in stone, soon to be literally so in 2016, unless Friends of McMillan park can appeal them.