Last month, local nonprofit Martha’s Table announced a new partnership with the Mayor’s Office on Returning Citizen Affairs to open its Outfitters program to returning citizens who are coming home to D.C. A credit card to Martha’s Table Outfitters is now included in the welcome home package MORCA provides, with no extra referral step or application process required. Martha’s Table Outfitters allows members to shop in their boutique at no cost with a $40 credit card that reloads automatically each month. The shop offers baby items, children’s clothing, and professional adult clothing, with most items priced between $1 and $6. The card reloads indefinitely, so customers can continue to shop there long after they secure a job.

President and CEO Kim Ford said having a support system is one of the most important resources for men and women returning from the criminal justice system. Reentry is always a trying experience, but because many of D.C.’s returning citizens have served their sentences far from home, they have been further isolated from their family and social network.

[Read more: The District’s only halfway house stands to lose its contract in October, with no set plan for a replacement]

“Phone calls and video conferences are one thing, but really being able to see your family member, your child, that’s hard for a lot of D.C. residents because you’ve got folks as far out as Hawaii,” Ford said.

She described one man she had met while he was shopping for his grandson at Outfitters. The man’s daughter gave birth while behind bars in Texas, and he had dropped everything to drive down, pick up the child, and raise his grandson until his daughter was released.

“[The man] talked about how great and what a resource Outfitters was for him,” Ford said. “Because here he was, not expecting to be this needed, if you will, during this baby’s life.”

Along with the baby clothes, workforce attire, diapers, wipes, and childcare supplies provided at Outfitters, which first opened as a “clothing closet” in 2004, Martha’s Table was founded in 1980 and has grown to provides early childhood education centers, no-cost healthy food markets, a daily hot meal service called McKenna’s Wagon, and other programs geared toward supporting strong children, strong families, and strong communities. Last year, they moved their headquarters to Southeast D.C. from their previous location on 14th Street NW, in line with a place-based strategy to serve in the neighborhood in which their services are most needed. 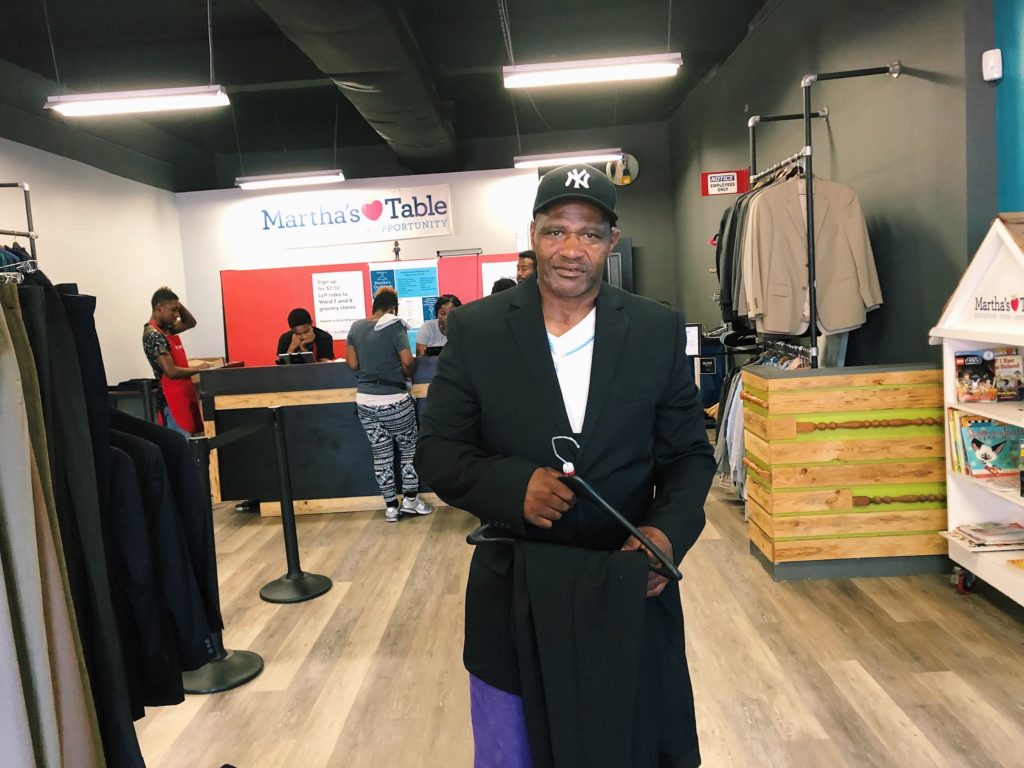 Mike Williams has been shopping at Martha’s Table Outfitters for quite a while, and he has the same job now as he had when he became a member. It’s helped him save money, he said, and the quality is good. Photo by Brianna Bilter

The Mayor’s Office on Returning Citizen Affairs provides services such as workforce training and case management and helps returning citizens obtain necessary documents, such as a driver’s license. But MORCA’s executive director, Brian Ferguson, said a number of men and women had voiced concern to case managers in the past about not having appropriate apparel for interviews and jobs.

“There’s a tremendous talent pool,” Ferguson said. “But they face a lot of stigma and that stigma is compounded when they’re not able to present well going into job interviews, and even when they’ve already started work.”

Wards 7 and 8 have plenty of thrift stores, said Tony Washington, the assistant director of retail operations at Martha’s Table. Outfitters used to be a thrift store as well, but Washington said it is now deliberately designed as a “boutique.”

The organization has strict quality requirements for donated clothes and return or repurpose what doesn’t meet those standards. The store is spacious, well-lit, and organized. Every step of the process is designed to replicate a traditional shopping experience rather than a philanthropic program, from the use of a credit card to the simple design on the paper shopping bags. “They deserve boutiques,” Washington said. “And that brings a level of pride, being able to walk into a storefront … [and] not have that [stigma] attached to it.”

Martha’s Table Outfitters had previously only been accessible to caregivers of children age 8 or younger. The new partnership with MORCA waives this caregiver restriction so that every adult and juvenile who goes through MORCA will receive a credit card. Kim Ford, The Martha’s Table CEO, said her organization is aware of how vital it is for returning citizens to be able to secure a job immediately.

This partnership means the Outfitters program won’t just be annexing the 1,800 to 2,000 people who return to D.C. from the federal prison system each year, but also people who are returning from jail and those who have already returned to D.C. but continue to receive support from MORCA. According to Ford, Outfitters could see an increase of around 4,000 members, a tremendous expansion from its current monthly membership of 1,200.

Since Outfitters has predominantly relied on clothing or monetary donations, in addition to some partnerships, Ford expects they will have to pursue other opportunities to sustain the quality and quantity across the size range needed. MORCA will be looking at grants, according to Ferguson, the executive director, because they want to see Outfitters expand.

But those are conversations the two organizations will have in the future. For now, the assistant director of retail operations thinks Outfitters can handle the increase in numbers.

Outfitters is less than a mile from the Martha’s Table headquarters, and conveniently one block away from MORCA. Now that the partnership has been announced, Ford said her organization hopes to continue to expand Outfitters’ reach even further. A display at Martha’s Table Outfitters. Photo by Brianna Bilter