As a native Washingtonian who has known Marion Barry in many roles over the past 50 years, from Pride Incorporated to the School Board to D.C. Council, the Mayor’s Office and his fall from grace, back to Mayor again and other stops along the way, one might say I’ve known Barry to wear many hats.

As someone that was here when Meridian Hill Park became Malcolm X Park, lovingly referred to as “Malcolm,” I found myself conflicted and frankly offended by the decision to schedule on March 2 the talk entitled, “History of Meridian Hill Park” at a similar time to the unveiling of Marion Barry’s statue outside the John A. Wilson District Building. 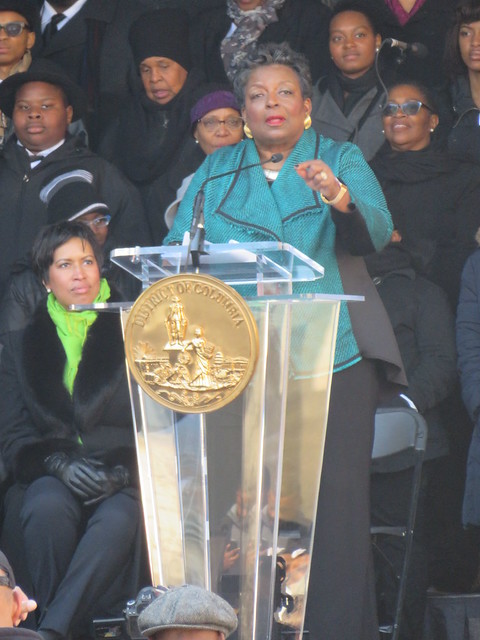 Because as D.C. natives would know, this man, also known as the “Mayor For Life,” is at the very least responsible for many of the improvements that have made D.C. the gentrifiers’ choice place to live. They would also know that after more than a half century’s labor, Barry is the most famous and arguably infamous character and benefactor of the history of the nation’s capital.

I’m offended because whoever decided that this was appropriate never considered the inclinations of folks like me: Black city natives that did our share — fair or not — to make this place worthy of this gentrification. Likewise, I’m offended that they disrespected Malcolm X by omitting his name, then calling the park memorializing him by its original name. This might have been avoided had Mr. Barry and others pressed for a statue in the park bearing his likeness. Even the pigeons must wonder about that. I digress.

It’s beyond understanding how a person gets a posthumous memorial, then a revocation. How does the decedent offend? Yet that is what occurs to the Black community with gentrification. We get bought out, the culture gets stripped, and property values miraculously, suddenly, increase. This is followed by the historical landmark signs with a pictorial synopsis being posted. Well, La-dee-da!

Such signage exists on many of these gentrified streets as a reminder of “what was then and now it ain’t no more.” My favorite such reminder is the marquee at the Lincoln Theater. I recall bygone days of a vital U Street corridor. More vital in the days of my parents, though, when folks celebrated the work week’s end as though it was a major holiday and filled the streets with excitement and entertainment. 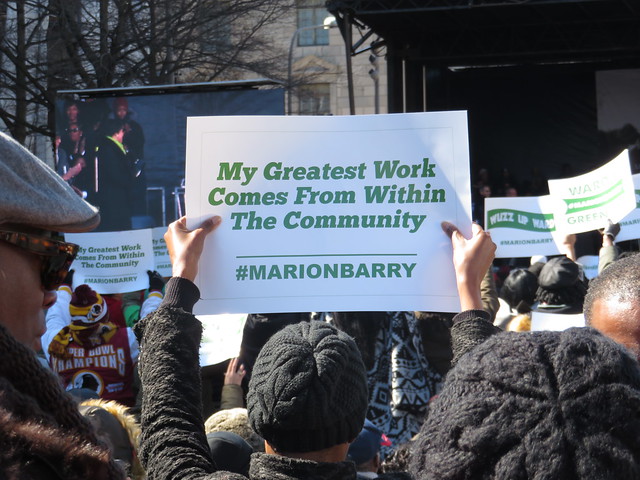 If there were no live acts at the Lincoln, the Booker T and Republic movie theaters had feature-length films, and one might even offer a double feature. I can recall both a live act and a film. There was a sign of good cultural experience to come in the form of a marqueed announcement. The marquee today says we’ve gentrified because it bears no sign. Neither now showing nor coming attractions. Nada.

Once, I witnessed a line wrapped around the block for ticket purchase at the Lincoln, with no marquee and no clue what all those folk were trying to see. What I could see was the property value of the area was unreasonably high.

The price, you ask? If you have to ask you really don’t want to know. 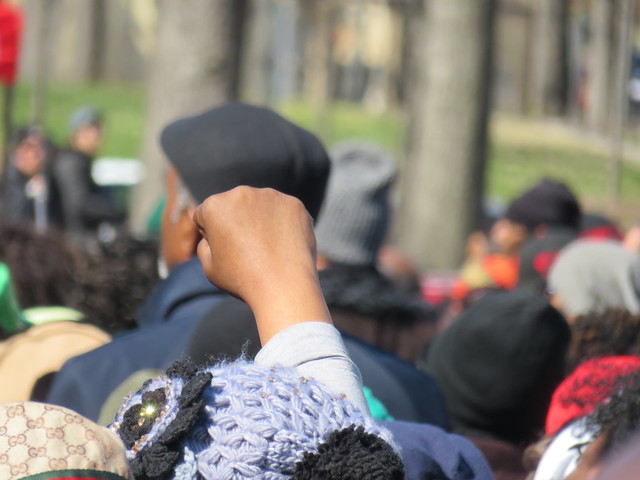 A crowd member holds up their fist during the National Anthem, in the spirit of Olympic medal winners John Carlos and Tommie Smith who shocked the world when they did the same at the 1968 Summer Games as a sign of Black power, and as a protest against inequality. Photo by Ken Martin

So there’s “no props” for Malcolm, none; no “Pride, (Inc) for “Hizzoner;” and none for the neighborhood. And no words on a marquee to tell us why. How could I trust the historians’ lessons? I can’t. Three guesses where I went?

The part that offends me the most is that when I was brought into the District it had a history. We didn’t read street signs or go to the park for lessons on it. We got that from our elders and our neighbors because we talked to them. We got to know them. We got to know ourselves and how we related to them. We knew our environment because we actively participated in its cultural evolution. We don’t seem to do that anymore. I guess that’s a sign of these gentrified times that we’re unable to comprehend. 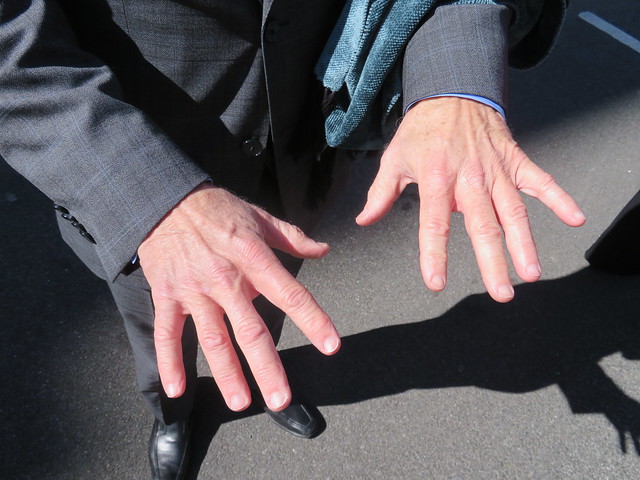 The hands that made the statue. Artist Steven Weitzman has designed large public art installations from bridges to bronze, wood and glass sculptures. Weitzman spoke at the dedication ceremony. Photo by Ken Martin