March together, build together

The advocacy group ONE D.C. and residents of Congress Heights held a march on Feb. 10 against Geoffrey Griffis, the founder and managing member of D.C.-based development firm CityPartners. Griffis was previously the chair of the District’s Board of Zoning Adjustment and a failed nominee of former Mayor Adrian Fenty’s to the Zoning Commission.

The group met at the Cleveland Park Metro station, just blocks from Griffs’s home. The group then pressed through the neighborhood. The residents are bringing forward issues pertaining to the development of two hundred units of affordable housing. The residents have publicly expressed poor treatment by Bethesda-based property owner Sanford Capital, who the residents accuse of maintaining poor housing conditions.

The residents have been organizing for a couple of years and do hold some victories. The group has had a hearing to discuss the receivership and who will cover costs for repairs. While the conversation about Tenant Opportunity to Purchase Act rights seems to be on hold, Judge Mott ordered $50,000 to be paid to the receiver during a Feb. 16 hearing and said Sanford Capital or Congress Heights LLC can inspect the property at the convenience of the tenants. All involved seem to want to see that people can have a safe and habitable place to live.

This march was important to bring to light issues that have been playing out in Wards 7 and 8 for several years, but that actually stem from Ward 3. Griffis lives in an affluent neighborhood and has expressed interest in a piece of land that has needed investment since the early 90s. It is located in an area that is still economically segregated. But the cost of the market-rate apartment units Griffis could develop on this land, adjacent to a Metro station and a brand new stadium that is under construction, would not benefit the people who have called Southeast home for decades. It would not benefit the people who live in fear, daily, of being pushed out of their neighborhoods. 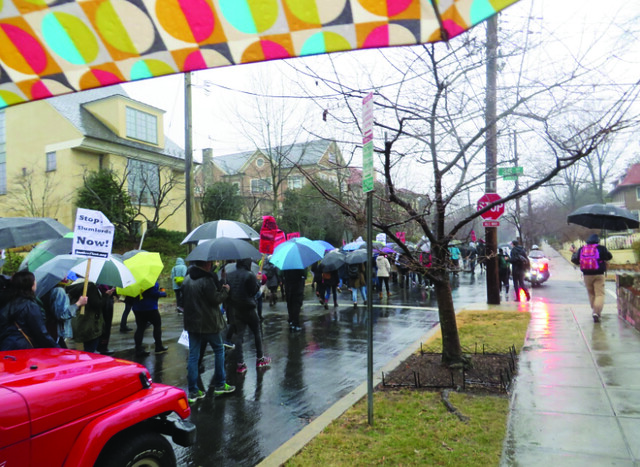 Roughly 70 protesters march from the Cleveland Park Metro to the home of Geoff Griffis. Photo by Reginald Black.

Who is he investing in? In a city where 17.7 percent of the population lived below the poverty line in 2014, according to the Office of Planning, Griffis would only serve wealthy folk that could afford to move. The tide would not lift our neighbors boats.

Growing up here, Congress Heights was one of those neighborhoods people would refer to as blighted, because of the economic inequality plaguing our community. I have watched as these properties have deteriorated over the last twenty years. I have watched as neighbors in other wards did not stand together to make sure development in their communities was inclusive and equitable. They did not stand up for eachother and many have found themselves priced out.

There are those that would say that marching through a neighborhood is worthless. They would say, “Think for yourself, build something.” Those persons don’t know the ins and outs of land deals. Land is the single most powerful resources a species can have. Everything needs and feeds off land.

Marching is important because it is a chance to raise public awareness and bring in broader audiences to learn a side of a story that they have not heard before. The people at Congress Heights had the right to make an offer to purchase their buildings under the Tenant Opportunity to Purchase Act. And they worked hard to find a nonprofit developer that would fund the $3 million offer that they did make, and commit to develop the properties into affordable housing. Yet the transfer of that land to Griffis’ company has left the matter in a murky area the courts must now navigate.

In the meantime, these tenants, rent-paying tenants, suffer. These are not people experiencing homelessness, though we both face deplorable conditions at the hands of one entity or another. The difference is that, with an apartment complex, there are rights and rules that govern how it is supposed to operate. Our fight to support the few remaining tenants of Congress Heights and our goal to build affordable housing instead of market-rate apartments, offices and shops, should be an example of how neighbors can come together to solve their own problems without the government’s help.

Showing solidarity with our neighbors has to be the way to got to really build something for ourselves. The skills and labor exist. We just need to meet people where they are and show that we care. Only when we care can something really be built. 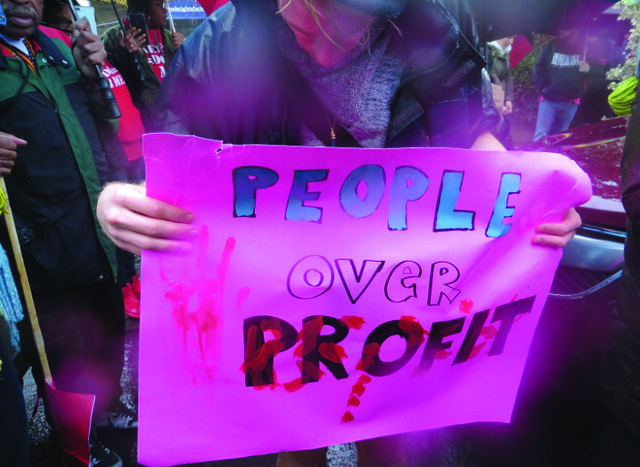 Sign created and carried by one of the protesters. Photo by Reginald Black