In 2011, Peta-Gay Lewis could not wait to become a homeowner in Ward 5’s Ivy City. She was one of the first residents to obtain housing through the Ivy City Special Demonstration Project, which provided 58 new affordable housing units in the neighborhood. Mayor Vincent C. Gray’s celebration for the program’s success was held at Lewis’ brand new home.

At the time, Lewis was happy to agree to stay in the home for 15 years. Two years later, though, she and her family are not so sure.

When Vanessa was diagnosed with mild asthma at age five, she used an inhaler every few weeks. Lewis says it took only two months for her daughter’s condition to deteriorate once the family moved to Ivy City.

Vanessa agrees. “Four times a day, the little pumps,” the she says. She follows her doctor’s instructions to use the inhaler regularly, in addition to two daily pill dosages.

Emergency room visits for her asthma also became a regular occurrence until the family switched insurance providers and were given a nebulizer machine for the home.

Air quality is on a lot of people’s minds here. Concerns are causing Lewis and her neighbors to band together to fight the opening of a new charter bus parking lot they say will exacerbate pollution in their Northeast neighborhood. The neighborhood is hemmed in by busy New York Avenue as well as train yards, warehouses and city vehicle lots. Advocates worry the increased fumes from the charter buses will only make health problems worse. 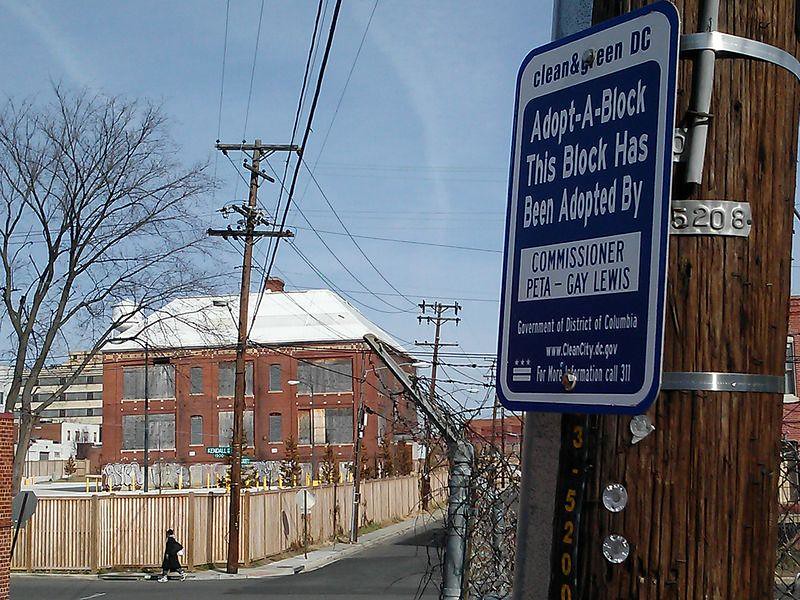 The bus depot in question was proposed by Mayor Gray’s office and the Union Station Redevelopment Corporation (USRC) as a layover lot for charter buses that were displaced from Union Station by inter-city buses in 2012. The lot has already been constructed on top of Alexander Crummell School grounds.The school building itself still stands, a protected historic site, surrounded by the new facility. The lot has never been put to use because Ivy City residents won an emergency injunction in December 2012 that ruled city officials violated the law by moving forward with development without completing an environmental review.

The city and USRC appealed the injunction in September 2013; the decision is still pending.

An expert from the American Lung Association (ALA) confirmed that ozone air pollution, which traffic emissions contribute to, can cause or worsen asthma. Children are more at risk from pollution because their lungs are still developing.

Although the District’s air quality has improved over the past 15 years, the city received an “F” for ozone levels and “C” for daily levels of particulate matter when graded in ALA’s 2013 State of the Air report card.

D.C. City Council member Mary Cheh, who chairs the council’s committee on transportation and the environment, used these facts to give context to a Jan. 2 public hearing to accept testimony regarding air quality legislation for the District, including the proposed Air Quality Amendment Act of 2013. The proposed amendment would establish a procedure for receiving, monitoring, and responding to air quality complaints and would increase maximum penalties for air quality violations. The bill would double the maximum fine for air quality violations.

Cheh expressed concerns of her own about the bus depot in Ivy City. “That particular scheme that they had in mind struck me as reckless. To think that you were going to put all those buses there, together with a cumulative effects problem,” Cheh said. She stressed the importance of improving air quality citywide, noting that that Washington D.C. remains in a “non-attainment zone” with the Environmental Protection Agency (EPA) because it has failed to meet National Ambient Air Quality Standards (NAAQS) for safe levels of ozone and particulate matter.

Lewis appeared as a witness at the hearing in her capacity as an ANC commissioner. She urged the council members to use Ivy City’s situation as a case study to inform the bills and tighten air quality standards. “We have the utility vehicles there, and the school buses idle all day long, and there’s a proposed bus depot,” testified Lewis.

Amanda Northcross, an assistant-professor in the Department of Environment and Occupational Health at The George Washington University, testified on preliminary findings of her own environmental review of Ivy City. Northcross worked with Ivy City residents and professors from Howard, Trinity and University of Maryland to gather data on current air quality in the neighborhood. The report is currently being compiled and will be submitted to the District Department of the Environment (DDOE).

“Overall, we found that Particulate Matter 2.5 (PM2.5) concentrations in Ivy City on a daily basis are almost always higher than the concentrations measured at the McMillan Reservoir monitoring station,” testified Northcross.

The team of scientists asked community members to volunteer to host air monitoring equipment in their homes. The limited amount of equipment moved from home to home to capture readings from around the neighborhood. Lewis was approached specifically to be a host because the team knew of Vanessa’s asthma, and the family’s home sits directly on the route the school buses take through the neighborhood. The buses are not supposed to drive through the neighborhood, but Lewis says they always do because it’s a short cut.

The team of scientists was put together by grassroots community organizing group Empower DC. The organization has been working closely with Lewis and other community activists since the fight for the injunction began.

“We are not protecting people proactively. We’re placing the burden on the community to go complain and fight – even go to court and all of the things we’ve had to do to try and protect human health,” testified Parisa Norouzi, Executive Director of Empower DC.

Cheh emphasized the need to carefully consider the cumulative effects of land use decisions on the environment in specific communities. She worried about the concentration of industrial facilities in Ward 5.

After Ivy City residents won the injunction to prevent the opening of the bus depot, the USRC voluntarily applied to have an environmental impact statement conducted. The results are under review.

Lewis and her neighbors are waiting to see what happens next. Lewis has grown to love the neighborhood. Yet she goes on worrying about her daughter. She thinks about leaving Ivy City. Yet she feels bound by her agreement to stay for 15 years. Everything she has is tied up in her house, she says.

The city council is considering a new bill to make it easier for residents like her to sell homes purchased with the help of initiatives such as the Ivy City Special Demonstration Project.

“It would be good if something like that is passed, especially for areas such as this where it’s a health related reason why you would want to move,” Lewis said in an interview.

In her testimony before city officials, Lewis stressed the urgency of her neighborhood’s needs, as well as concerns about her daughter’s health.

“I know there are steps in place to improve the area. However, I’m asking that it is moved along quicker and to have the support of everyone on this panel today because my daughter is getting sicker by the day,” Lewis told officials.

“State of the Air” infographic, courtesy of American Lung Association.