At Compersia, sharing is more than caring — it’s life

As children, many of us were encouraged to learn how to take turns.  For some, sharing toys, emotions and common spaces with those around us was an early lesson in societal values. But Compersia, an “intentional community” in the Northwest quadrant of Washington, D.C., has taken the concept of sharing to a new level.

The cooperative derives it name from “compersion”, a term that appears in urban dictionaries, though not in Merriam-Webster Unabridged. The online definition of “compersion” is “the feeling of joy one has experiencing another’s joy.” Compersion is the opposite of schadenfreude.

The seven adults and four children who are members of Compersia share basic economic necessities, including their house and individual incomes.

Founded in March 2016, Compersia is the first commune in D.C. to be recognized by the Federation of Egalitarian Communities. Members log their labor — both income-generating work, like a paid salary, and non-income generating work, like childcare and household chores — to ensure that all contribute significantly to the commune.

Anthony Telos, a Compersia member, has been at the cooperative for about a year, but before coming to D.C., he spent time at housing cooperatives that “share some things, but definitely fewer things.” 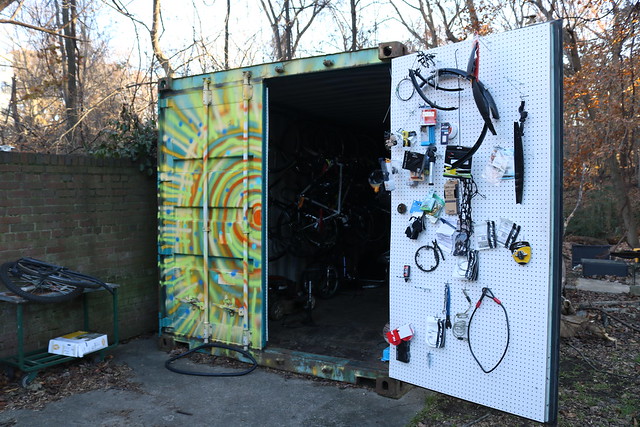 A shared storage area at the cooperative. Photo by Samantha Caruso

“I was in search of a community that shared my values more so,” Telos said. “And that’s what sent me into Compersia, a more resource-sharing community… You don’t see a lifestyle like this validated from the outside very often.”

Members share funds via a joint bank account, which differs significantly from the practice of most sharing communities. “Any out of the ordinary spending that’s over $100, we ask each other about that,” Telos said. In the spring, for example, he asked for the group’s permission to take a community herbalism course, which they allowed.

Right now, Telos mainly contributes non-income generating labor: He volunteers on two local urban farms, one of which gives much of its produce to Bread for the City, and canvasses for petitions organized by groups he supports. On Saturdays, he runs a farmers market.

Another Compersia member, Kathryn Johnson, works at the American Friends Service Committee as a policy advocacy coordinator and contributes mostly income-generating labor. With her family, she lived in an intentional community in Washington state from ages 12-14, and missed doing so throughout her adult life.

“I’d always been really interested in living in another intentional community, but had just gotten distracted by other things in my life like travel and activism, so I’d just lost that vision of being a part of [an intentional] community,” she said. A shared bulletin board. Photo by Samantha Caruso

She joined Compersia in the early spring of 2017.

“Since I work full-time [outside] the home, it’s been really nice to have other people take care of the domestic stuff,” she said. “I do less domestic stuff, but still sometimes cook and clean at dinner. I’m not home that much.”

Vital to the success of Compersia and happiness of its members is its Clearness Process, which members consider to be a cornerstone of the community. All members must, at different points throughout the year, have conversations with every other member to air grievances and brainstorm solutions to communal problems.

“Instead of letting things kind of build up, we actually have a time to sit down and discuss with each other the experience of living together,” Johnson said.

In addition to the Clearness Process, the entire community meets once a week to discuss smaller issues that affect everyone.

“[It] is kind of like a business meeting,” Telos said. “We talk about projects we’d like to do and things we’d like to spend money on, those decisions that we make together as a community.” Jars of herbs harvested from the garden. Photo by Samantha Caruso

A frequent topic of discussion is their progress toward saving enough money to make a down payment on a house that could fit up to 15 community members, which is one of Compersia’s “savings goals” right now.

Both Telos and Johnson said the practice of “deep sharing” does not come without controversy.

“We’ve all been raised a certain way with certain values, and when we tell people we share our money, they’re like, ‘Whoa, that’s weird. I could never do that,’” Telos said. “Sharing this deeply is not a value that we see reflected in many places in our society. It’s not like we all move in and we start sharing our paychecks hunky-dory. There’s resentment. There’s sometimes conflict between the people who make more money and the people who make less money.”

Ideological differences in race and racial equality and gender and gender equality can also complicate the process, Johnson said.

For Johnson, sharing income is not just about living a life detached from capitalism; it’s also about giving back to a world she believes has unfairly given her too much. “I’m white; I’m from a middle-class family; I went to college; I’m a U.S. citizen. So, I think I have a lot of privileges that made it easier for me to get to a place where I could earn the income that I do,” she said. “But I don’t feel like that income is only mine. It comes from a country with a history of exploitation of land, of slavery, exclusion of immigrants…  [factors that] built the supremacy that I then benefit from.”

Living at Compersia has helped Johnson work toward a personal goal of expressing her needs.

“I’ve really pushed myself to be more vulnerable with people in the community and ask them for help when there are things they can help me with,” she said. “I think I’m slowly getting better at that.”

Think you’re ready to commit yourself — and your bank account — to Compersia? Just make sure you’re ready for a radical change in how you share, Telos said.

“It’s the kind of thing where you can grow a lot doing something like this, but you have to come to the table already comfortable with the idea of sharing that much,” he said.