On October 29, a bright room near the front entrance of DC General Family Homeless Shelter teemed with young children dressed as Spiderman, pint-sized Teenage Mutant Ninja Turtles, and Olaf from “Frozen.” Each had chosen from a pile of donated Halloween costumes. Middle and high schoolers danced to “Watch Me (Whip/Nae Nae)” with bellies full of pizza. The walls and ceilings were hung with paper pumpkins and ghosts, and volunteers decorated the faces of youth with rhinestones and face paint. This was the fourth event that The Homeless Children’s Playtime Project held in their new Preteen and Teen space at DC General.

“Being with these kids is the highlight of my week,” said volunteer Mary Hanson, citing the resiliency of children and youth that have endured tough circumstances. 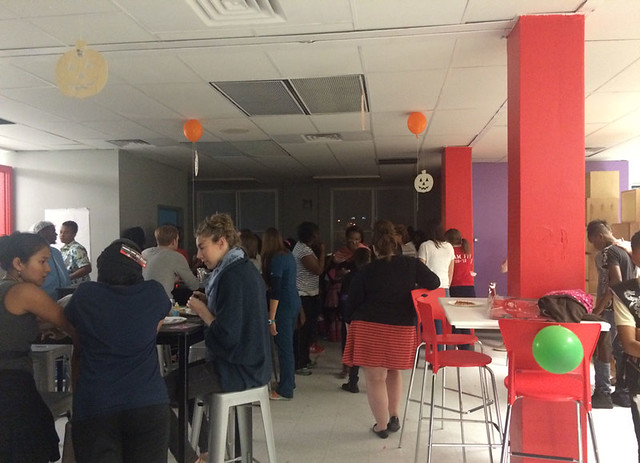 The new center opened with a ribbon cutting on October 21 and aims to give preteens and teens living in DC General a new space to relax, interact, read and do homework. The Homeless Children’s Playtime Project is a nonprofit organization that gives homeless children a place to play.

Present at the ribbon-cutting were Department of Human Services Director Laura Zeilinger and D.C. Ward 8 Councilmember LaRuby May. Zeilinger spoke about the city’s commitment to serving District residents that are in need of support.

Also present, Marcellis, a current participant in Playtime Project’s Teen Night, expressed his excitement for the new center and the fact that he and his peers finally have a space of their own. Another attendee, Teen Night graduate Chris, called the new space “awesome” and said his Playtime mentor had a dramatic impact on his life.

Playtime Project began serving the youth of DC General in 2009. The organization created a special center for babies and one for young children. But the need for a space that specifically caters to older kids became apparent.

After Mayor Bowser took office, Larson again pleaded her case. “It was really easy this time,” Larson said. “Like they are more serious about addressing the homeless crisis.”

Now complete, the new center is a colorfully designed space divided by a wall of open shelves full of books that separates the teens and preteens. The groups are kept close but still given their own areas.

The facility was primarily built by the 245 volunteers who applied to help and give back to children living in the family shelter. Development for the space, which was planned in July, moved ahead of schedule due to this overwhelming amount of support. 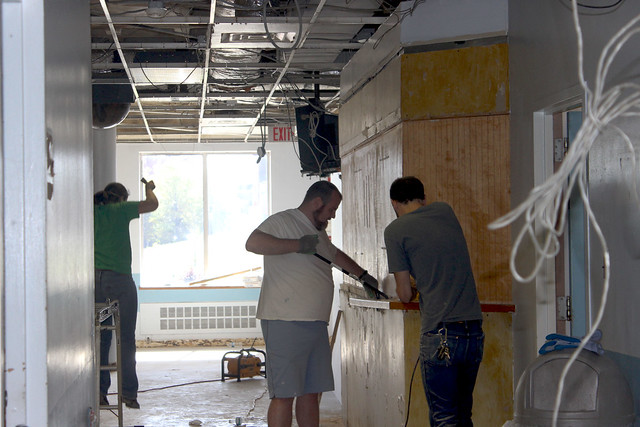 Patrick Issa, a first-time volunteer who was present on one of the construction days, set to work cleaning a bathroom near the entrance of the playground at DC General. It was previously locked and hadn’t been cleaned in years. Despite this, he was still happy to help.

“There was a need, so we filled the need. Whether it’s the bathroom or what’s going on next-door, there’s a need so you got to fill the need,” said Issa. “That’s how we make everything better. Everyone carries a little bit of weight and it all gets better.”

Lowe’s Home Improvement and The JBG Companies awarded grants that made the project possible. Also, designer Gabe Peyton of DCByGabe volunteered to create and design the preteen and teen center. This was his first time volunteering for a project like this, especially of this scale.

“I just like to be of service to people. It’s the way to be,” said Peyton. “For my work, I do really high-end work, and it just sort of affords me the ability to be able to give back and do things prosperously for the community and for people and to feel really good about it too.”

Playtime Project is privately funded and utilizes space in DC General, according to Dora Taylor, Public Information Officer for the Department of Human Services. Government staff is not in DC General for Playtime Project, nor is it monitored by the mayor’s office. 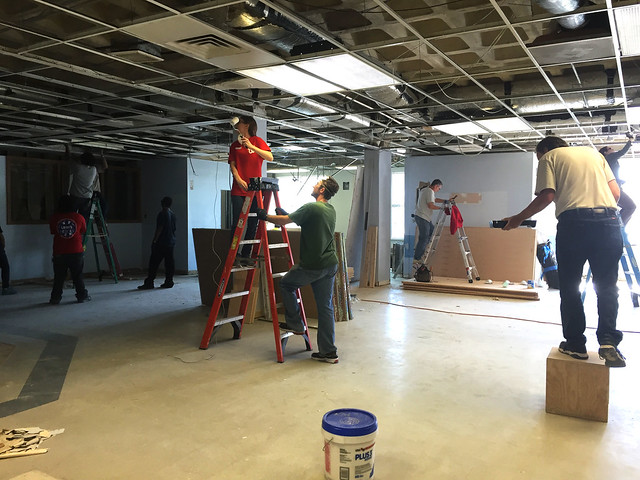 Construction takes place on the new preteen and teen center in DC General for Playtime Project. | Photo by Victoria Jones

Two Teen Night participants and attendees of the Halloween event, both young men, spoke about the importance of the teen program and its new space. They requested that their names be withheld.

“You actually get to meet new people,” one of the young men said of Teen Night.

Teen Night provides a unique opportunity for youth in DC General to socialize due to strict facility rules about guardian supervision. When asked why the young men chose to attend Playtime Project’s optional programs, both said in almost unison that they “actually get to have fun.”

“This is probably the only reason I like being here,” one added.

According to Leah Gage, Playtime Project’s Social Work Intern and Teen Resource Coordinator, it’s not uncommon for preteen and teenaged youth who live in DC General to keep their residence there a secret as these two young men chose to do, because they are aware of the stigma that many people attach to living in a shelter.

“A lot of teens find the hardest thing about living here is hiding it from their friends,” she said.

Playtime Project provides a sense of normalcy to adolescents living in sensitive situations and dealing with social hardships. Its resources nurture the youth living in DC General as they transition from childhood to adulthood. Technology stations are also available to help young people conduct research for school and search for employment opportunities. A projected movie screen in the center allows the youth to watch and enjoy educational films on Teen Night. Events held in the space will often incorporate educational elements with social time. At the Halloween event, for example, participants heard a presentation about the dangers of K2 and synthetic marijuana. 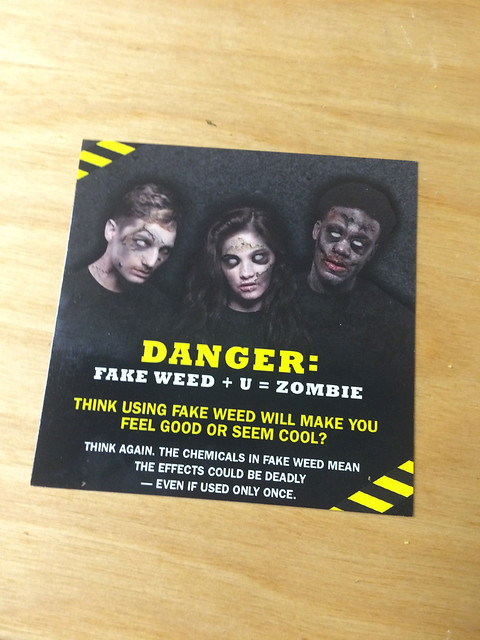 A flyer about the dangers of synthetic drug use, given out at the Halloween Night program. | Photo by Olivia Aldridge

The organization Live2Give has pledged $50,000 in matching funds towards programs in the new Preteen and Teen Space. They are challenging other Playtime donors to match their gift in order to raise the $100,000 that Playtime Project needs to support DC General youth through 2016.

While DHS plans to close DC General by 2017, according to Dora Taylor, Playtime Project will continue to serve the children in the shelter until the closing.

“However many years that it’ll still be open, children deserve a decent place to be now.  Every night children have homework.  Every day children have developmental milestones to work on,” said Jamila Larson.

The Preteen and Teen Space is designed to be mobile, so Playtime Project will be able to relocate the space when the time comes for DC General to close and its families to disperse into the smaller, newer shelters that the city has been preparing for them. This change will require some strategic planning from Playtime Project. In the meantime, volunteers and staff will continue to foster Playtime Project’s space and programs as a positive force in the lives of homeless youth.

“It feels good to have people investing in DC General,” said Leah Gage. 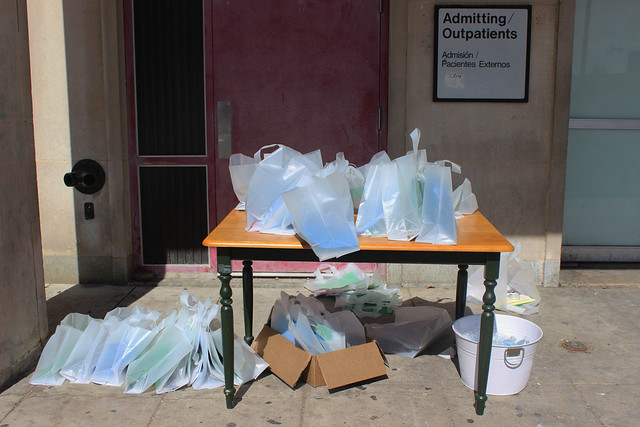 Bags for volunteers sit outside of the construction site. | Photo by Victoria Jones