Neon colored sneakers and ponchos contrasted the backdrop of a gray sky. The sound of raindrops and rubber pounding the pavement synchronized to roaring rock and roll music.

Twenty six miles. Five hours and 27 minutes. A familiar feeling of pride and success overcame Waldon Adams as he crossed the finish line. Sweat and rain soaked his body at the completion of his 13th marathon.

It heightens his mood. It wards off his manic depression. Since his HIV transitioned to AIDS in 2008, he runs to “burn off the medicine.” For Adams, the benefits outweigh the possibility of his asthma acting up during a run.

“We all have ways we channel our energy. For Waldon, it’s running … But without housing, you can’t pursue any of that,” Tom Murphy, the director of communication for Miriam’s Kitchen, said.

Adams has experienced many episodes of homelessness in the past 32 years due to his mental and physical illnesses. He said that he had been to “all the psych wards and all the hospitals,” only having a place to spend the night if he was “sick enough.”

For the past six years, however, living in an apartment has helped stabilize Adams’ lifestyle. Friendship Place has provided him with case management and permanent supportive housing. Former Division Manager Jill Carmichael managed the different housing programs and supervised Adams’ case manager. Friendship Place has integrated permanent supportive housing since august 2008, according to Carmichael.

“Permanent supportive housing is the best intervention for the most vulnerably chronic homeless individuals in our city,” Carmichael explained . “It provides safe and stable housing with intensive case management …which we know is cheaper than leaving them on the street.” The District’s Interagency Council on Homelessness (ICH) plans to spend more money on permanent housing in its efforts to end chronic homelessness by the end of 2017. At a public discussion on the ICH’s plans for 2015-2020, Kristy Greenwalt, the director of ICH, said that because it is spending a lot of money on emergency shelters ICH wants to increase the effectiveness of permanent supportive housing. This will reduce the need of emergency shelters, according to Greenwalt.

Adams has plugged in to the community through the housing and case management services he receives at Friendship Place. He was asked to speak at an event at Miriam’s Kitchen, where they kept in touch and reached out to him with a job opportunity. Adams now works as an advocacy fellow for Miriam’s Kitchen.

“I’m manic, and sometimes I can’t stay on topic. As time went on, I was asked to speak more and more,” Adams said the job offer came as a surprise.. “I guess I was speaking on their talking points, because they offered me a job.”The Advocacy Fellow Program at Miriam’s Kitchen began in January 2015. Adams is making history as an inaugural fellow.

Through his new job, Adams has several speaking engagements lined up. He has been learning about the different housing options, the legislative process on housing and how the city council works. It’s a temporary position, but for Waldon, it’s the first time he’s been offered a job.Adams has injuries from an explosion he experienced in the Navy which led to the onset of post-traumatic stress disorder. He was honorably discharged because of his psychiatric disorders.

“I don’t have a resume. I’ve never kept a job. It’s hard to get a job when you’re homeless,” Waldon said. “I’ve worked long and hard to find housing and support, which is probably harder than a regular job since you’re trying to survive on the streets.”

Adams has had a history of mental disorders since childhood. He went to college to study computer science, but he dropped out due to his social phobia. Shortly after, Adams was accidentally hit by a car and broke a rib. Unable to work, he became homeless and was first introduced to crack cocaine out in the streets.“That’s when it went downhill,” Adams recalled. “Mania exasperates your addictions or even anything you experiment with. I just couldn’t stop.” 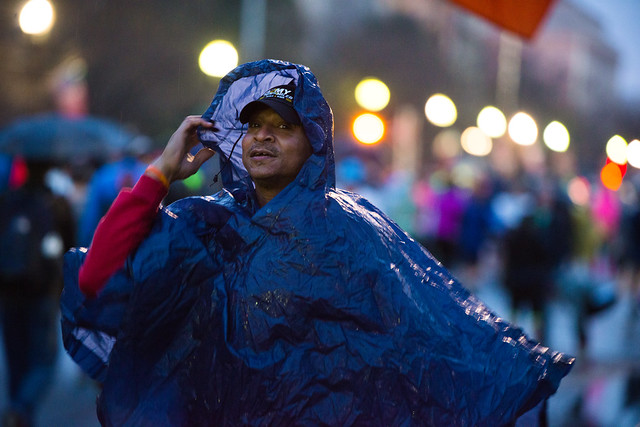 Runners, including Waldon Adams, sported ponchos during the raining ware-up for the marathon. Photo by Matailong Due

Adams wandered with just the clothes on his back because he knew he would throw his belongings if his manic episodes acted up. Violence surrounded Adams on the streets. He explained that he has experienced having his head split open, his face cut open twice, his jaw broken twice, and assault with baseball bats several times.

“All I could do was beg for my life,” Adams said.

Other times he felt quite differently. Adams remembers planning to commit suicide at a hotel on New York Avenue during one such darker moment.

“Sometimes, I would just wait to die every time I sat outside,” Adams said. “The only reason I’m alive is because of my mood swings. And running also gave me another effect that made me feel good.”

Before his work with Miriam’s Kitchen, Adams didn’t understand how all his health and behavioral issues factored into his housing situation.

“Now I know that I’m in permanent supportive housing. I was considered chronically homeless. I understand now that chronic homelessness is when you have mental illness, substance abuse, or physical illness. I had all three,” Adams said. “Housing first changed my life.”

The housing first model allows no barriers for attaining housing. Traditional housing approaches require applicants to prove they are ready for housing by achieving sobriety or going through mental health treatment first, according to Jill Carmichael.

“It’s really difficult to get clean and sober when you don’t know where you’re going to sleep that night,” Carmichael said. With the housing first approach, “we house you first and then work on everything else.”

There are about 1,600 people that are considered chronically homeless in the District, according to Kristy Greenwalt. Without the housing first method in action, many of these individuals would remain in shelters or on the streets, like Adams once did.

The Vulnerability Index Service Prioritization Decision Assessment Tool (VI-SPDAT) informs individuals of which housing intervention will best suit their needs. Adams hopes that through the work he does at Miriam’s Kitchen he will one day be able to help others through the assessment process. He especially wants to help those who suffer with mental illnesses and HIV/AIDS. Adams is training for another upcoming race in two weeks. He says he’s “still lacing up [his] shoes” though he is unsure of the future. Adams is still battling with AIDS. Occasional infections remind him that he is not cured. Sometimes he won’t leave the house because he still struggles with depression.

A large part of what keeps Adams going is the runner’s high he gets after training or the completion of a marathon. He is part of “Marathon Maniacs,” a club of runners that sets out to complete several marathons in a certain amount of time.

“Sometimes there are people that are faster than me, but you’re running your own race,” Adams sad. “A lot of times when you’re running a race, you’re running for a personal record—you beat the time that you had before, and you keep on going.”

For Adams, March 31 will mark his new personal record—six years of sobriety.