A dozen vibrantly dressed partygoers and performers stood around a long communal table at Joseph’s House in Adams Morgan. Joseph’s House, a home for formerly homeless people suffering from advanced HIV/AIDS or terminal cancer, was hosting a “Drag Brunch.”

The executive director of Joseph’s House, Patty Wudel, explained that a couple of current residents mentioned wanting to see a drag show—they had never been to one. Through her connections with the Imperial Court, a charity supporting the LGBT community, Patty brought one to their front doorstep featuring entertainment from the Imperial Court’s own resident drag queen, Empress Muffy.

To enhance the brunch’s ambiance, the esteemed Empress Muffy generously shared her wardrobe as well as her time with the extended community of Joseph’s House, many of whom took part in the show. Iisha, one of the show’s stars, was dressed in a red, carnivalesque dress. She sat in the living room-turned-dressing room next to a resident who was snoozing on the couch. On the walls surrounding her hung numerous photographs of Joseph’s House community members: residents, staff, and visitors. Iisha is a mother of two daughters and a former resident of Joseph’s House. “I’m performing a couple of numbers,” she said of the upcoming show. “We’ve been practicing all week.” 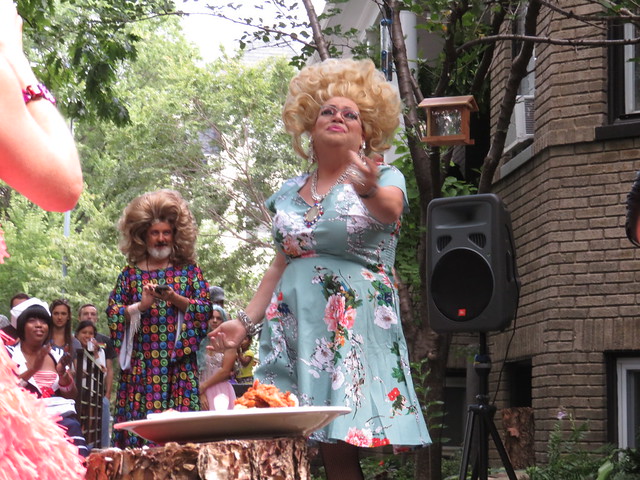 Joseph’s House was founded as a hospice in 1990 in response to Washington DC’s HIV/AIDS epidemic. However, as treatment options for HIV/AIDS have improved, residential respite care is increasingly offered in addition to end-of-life care. Deputy Director Scott Sanders, who went by his drag-name “Delicious” at the event, said, “About half of our residents are able to recover enough to move out of Joseph’s House and live independently. A lot of people here today are former residents.”

Contracting HIV is both a cause and effect of homelessness. At least half of the people living with HIV/AIDS experience homelessness or housing instability, and those experiencing homelessness are as much as 16 times more likely to contract the virus, according to the National AIDS Housing Coalition. For many of those referred to Joseph’s House, living on the streets with HIV/AIDS is complicated by other problems like mental illness, stigma, and substance abuse. At Joseph’s House, the first step to treating any combination of problems is ending homelessness by providing a welcoming home.

When Iisha moved from the hospital into Joseph’s House, she weighed 88 pounds and had just battled a nasty staph infection, which cost her an eye. She was in bad shape, but never lost her determination. “There’s a cat named Gracie that lives at Joseph’s House,” Iisha said. “She’s known for sensing when people are close to dying. One day I was watching an episode of 227 [an 80’s sitcom] when Gracie came in my room and curled up next to me,” she continued. “‘Get out of here, Gracie!’ is what I told her.” On this occasion, Gracie’s sixth sense had proved inaccurate. 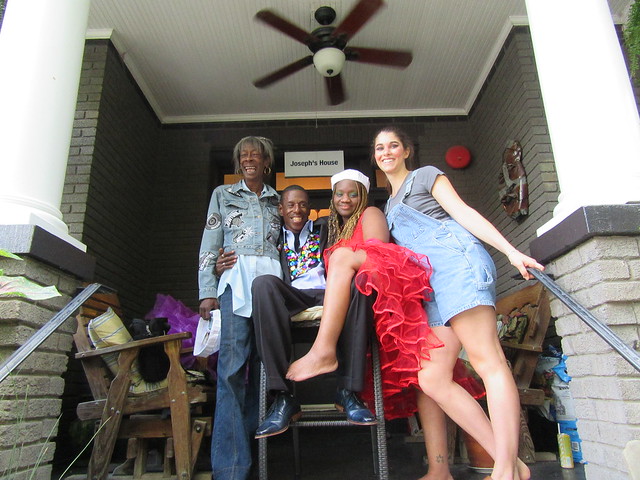 Kurtis Lang and Iisha, center, catch up with friends on the front porch of Joseph’s House. Photo by James Marshall

The drag show took place on the front porch on a sunny Saturday afternoon. Empress Muffy, in a light blue floral gown and a big blonde updo, expertly kicked off the show and it quickly became a block party. The audience scarfed down pulled pork and greens from their chairs while neighbors strolling by stopped and spectated from the sidewalk.

Kurtis Lang is another former resident at Joseph’s House, and Iisha’s friend. “It’s Kurtis with a K. That’s my weekend name, my club name,” he said. Lang was beaming after his homage to Smokey Robinson gained him many admirers in the crowd. “I used to live at Joseph’s House, but now I live down the block at Jubilee.” Joseph’s House partners with Jubilee Housing. Together they help transition former respite-care residents like Iisha and Lang back to independent living.

Iisha also now lives with her two daughters at Jubilee, and said she comes “to Joseph’s House almost every day.” The emphasis put on community and relationships as a part of their model of care is fundamental. “We eat together, we sing together…everything here is based out of love,” Iisha continued. “We’re family here. Family is not blood necessarily.”

After the finale of the drag show had morphed into a dance party, Iisha and Lang sat on the front porch with a woman visiting Joseph’s House for the first time. “My granddaughter just moved in here,” the woman said with a troubled look on her face. To reassure her, Iisha vouched for the character of the staff, and invited her into their community: “Having visitors really kept my spirit up. I don’t think I would have made it without them.” 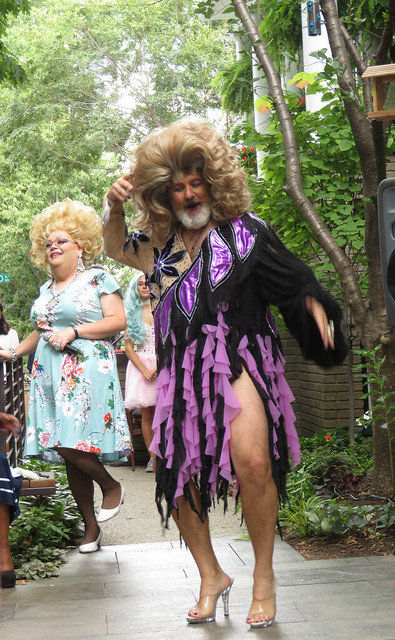