King of the Road: Saul Aroha Nui Tea’s path to healing through puppeteering

aul Aroha Nui Tea describes himself as a “climate refugee:” He recently moved to D.C. after forest fires in California and a dispute with his landlord, a former friend, persuaded him that it was time to leave the West Coast.

The move to D.C. was just the latest in a life of frequent change. Tea, born in 1975, says he spent about 20 years hitchhiking across the country and has been to D.C. and every one of the 48 contiguous states state except Delaware.

“The guy in that old song, ‘I know every handout in every town and every lock that ain’t locked when no one’s around, king of the road?’ That was me,” Tea said.

The cartoons from his childhood have become some of his most important influences. “It was Jim Henson that saved me all this time,” said Tea, referring to the creator of the Muppets and Sesame Street.

Tea had an abusive childhood. He has lingering PTSD from being physically beaten at a Catholic school in his hometown of Milwaukee. “The only place I had safety in all that time,” he said, “was watching the Muppet show, Sesame Street, all that stuff.”

Since 2016, he’s been channeling those comforting memories into his own puppetry as a form of therapy. His latest work is a multi-part folk opera featuring a cast of the “Hell’s Bottom Congress of Puppets.” His first work for Street Sense Media was based on a Street Sense Media writers’ workshop prompt asking writers to reflect on the death of Ruth Bader Ginsburg; Tea gathered his notes and ideas for certain puppet characters and wrote a song celebrating her life.

For this project, he’s taken a step back to create a collection of Weird Al-style parody takes on popular songs for the puppets to sing, centered around his observations on the experiences of poor people. The folk opera will also provide more background information on the characters he’s been working on for some time.

His first draft of the project, he acknowledged, lacked in accessibility for the audience. “For me, as a childhood PTSD, active schizophrenic trying to get things to make sense using seven-dimensional media like print and puppets and music and stuff like that,” he said, “that’s a whole lot for someone to take in at first glance.”

Part of the challenge is that Tea’s work draws on a personal mythology built on a wide range of experience and thought. Tea developed his puppetry working as a camping outfitter for a program for veterans with PTSD in California. He would put on puppet-emceed talent shows for the community when they went on a camping trip to enjoy a fireworks-free Fourth of July.

Animal rights is another of the themes in his work and the inspiration for the character LMNOP Soup, an elephant, based on his time working for the Barnum and Bailey Circus in the early ‘90s before an experience with a member of PETA persuaded him to leave the organization. But the most important foundation of his puppetry is his favorite Muppet, Oscar the Grouch.

Tea prides himself on working with recycled materials and rejects a culture of disposable goods, which he considers to go hand-in-hand with traditionally European values and specifically land-use practices. He drew parallels between the gentrification of Hell’s Bottom —  the District refused to renew the liquor licenses of any bars in the area in 1891 leading to an increase in the value of the neighborhood — with the more recent gentrification of Logan Circle and the District as a whole. D.C. was ranked as the city with the 13th highest proportion of gentrifying neighborhoods by the National Community Reinvestment Coalition this year, a drop off from 2019, when it was the highest-ranked.

“All the real trendy white people have moved there now and it’s a real nice place and everybody loves this neighborhood on 14th and U — and man, are there a ton of people just dying outside their doors,” he said. “Oscar the Grouch is crawling out of garbage cans around here and his goal is to tell everybody, ‘Guess what? You’re false, you’re freaky and you’re fraudulent.’”

A concern for marginalized people is at the core of his puppeteering. He said that the basis of the folk opera would be the experiences of poor people, and he is outspoken about his support for the Black Lives Matter movement.

“The Black Lives Matter movement is very, very simple,” he said. “It’s because for 150 years, the people in this country weren’t allowed to get loans if they weren’t standard colonial white people.” The Federal Housing Administration refused to offer mortgages to Black people from its founding in 1934 until the passage of the Fair Housing Act in 1968.

Indigenous cultures are also a major source of inspiration for Tea, who said he identified with the protagonist of Aldous Huxley’s “Brave New World.” He said he has camped extensively with members of the Hopi and Dineh nations and derived his puppets in part from Hopi kachina dolls. Kachina dolls are figures that represent spirits of animals or ancestors or of deities and elements that are part of the Hopi religion.

Tea is at a time of transition in his life. He legally changed his name in January of this year to Saul Aroha Nui Tea, after realizing through therapy that his given name triggered flashbacks to traumatic incidents from his childhood. “Saul Tea” is meant to sound like “Salty,” and Aroha Nui is used as a greeting and pleasantry by the Maori people, the indigenous people of New Zealand. Tea said he spent a year in Rotorua, New Zealand, in 1992 with a half-Maori family as part of a high school student exchange that had a profound impact on him. 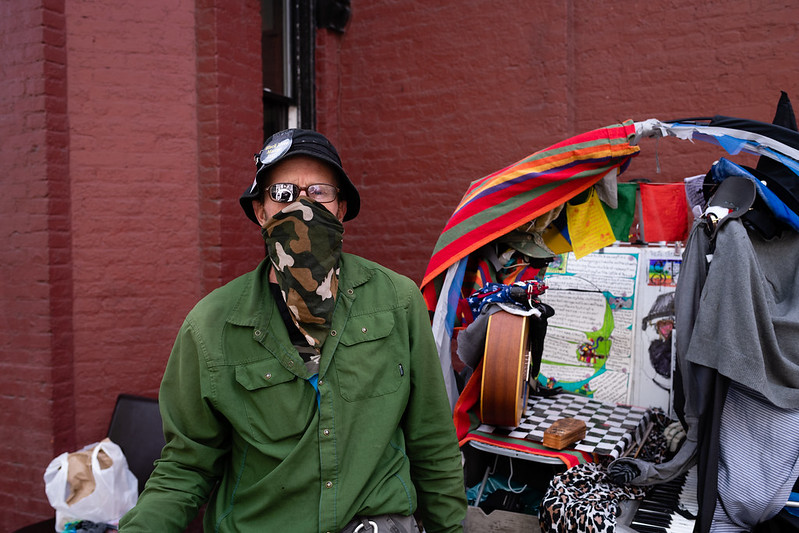 Saul Tea and his puppets that he’s built from trash found near Logan Circle. Photo courtesy of Rodney Choice

He recently began wearing an eye patch over his right eye because after an injury to it he’s suffered persistent hallucinations of children being abused, part of the trauma from his childhood.

Part of his reason for coming to D.C. was hearing the NPR program Studio 1A, broadcast by local station WAMU, housed in American University in D.C. From being chosen to read the rules and policies to the room at various 12-step program meetings, he discovered he had a natural voice for radio, and was encouraged by people he knew to pursue a career in broadcast journalism. Hearing the broadcast from D.C. was the push he needed to move to the District.

After moving to D.C. and chatting with a Street Sense Media vendor, Tea realized that the writing, podcasting and film classes offered were a good opportunity to expand his work in puppeteering. Broadcast journalism is the long-term goal, but for now he’s focusing on perfecting the Hell’s Bottom Congress of Puppets. He relates them to a metaphor he heard while camping with the Lakota and Blackfoot tribes, when he was told that if promoting understanding and harmony and other Native American values were “gloves” that fit his hands, he should wear them.

The puppets, Tea said, “are things that are clearly good gloves to my hands as therapy tools.”

The first page of the songbook of Saul Tea’s 12-part folk opera is available here. All future pages will be added to that list. More of his work can be found at CongressOfPuppets.blogspot.com and on Twitter at @HellCongress.