In winter when temperatures can plummet to life-threateningly low levels, cities and counties must determine under which conditions they will open emergency shelters to protect homeless individuals from hypothermia. But, across the country, there is no uniformity in this decision-making process.

“There is no federal guidance or recommendations to states as to when emergency warming shelters should be opened during winter weather because of the differences between local jurisdictions such as climatic norms, available resources, and preparedness-level of the impacted population,” said Jay Dempsey, health communication science officer at the Centers for Disease Control and Prevention (CDC).

The range of temperatures, including the wind chill factor, for the implementation of emergency services varies greatly across the country from 13 ˚F in Baltimore, Md., to 40 ˚F in Denver, Colo. according to the National Coalition for the Homeless.

One reason for this variance is because medically there is not a distinct temperature associated with an increased risk of hypothermia. 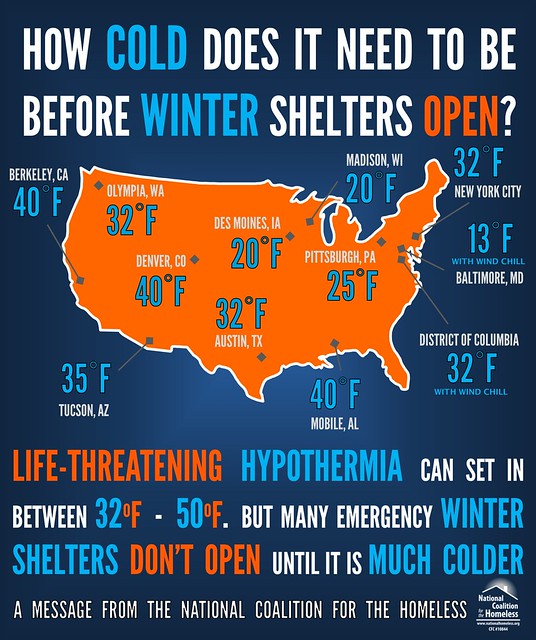 Infographic courtesy of National Coalition for the Homeless.

“The rate at which the body loses heat when exposed to cold temperatures, basically a person’s susceptibility to hypothermia, is influenced by several health factors,” said Xu.

Some of those factors include: age, underlined health conditions, especially cardiovascular disease and metabolic disorders, malnutrition, and alcohol, drug or nicotine use.

Hypothermia is considered a medical emergency and can lead to death if not promptly treated. In the United States, an average of 1,300 people die each year from hypothermia. And although it usually occurs at very cold temperatures, it can also happen at temperatures above 40°F, especially if a person lacks protective clothing or if his or her clothing is wet, the CDC said.

Without clear cut guidance, cities and counties must develop their own terms and strategies for providing shelters for the homeless in cold weather. Some hypothermia policies, like the one in Baltimore City, are set by health commissioners.

Others are established by the shelters themselves, such as in King County, Wash., where a group of cold-weather shelters agreed on a temperature is 32°F or snow accumulation of 3 inches, said Karen Bergsvik, Human Service Manager with the City of Renton.

Here in the District of Columbia, the Department of Health creates a yearly Winter Plan to outline the services such as shelters, food and transportation it provides during the winter season from November 1 to March 31.

Some of the city’s services operate without temperature restrictions. However, hypothermia shelters operate only under a hypothermia alert, which is issued by the District’s Homeland Security and Emergency Management Agency when the temperature, including the wind chill factor, is 32°F or below.

Last winter season, the District issued hypothermia alerts on 63 percent of the days. An additional four alert days were called in late October and early April.