There is a running joke at Georgetown Ministry Center that the five-month closure of its daytime program, starting last October, can be blamed on the shower.

Nestled under Grace Episcopal Church on Wisconsin Avenue, with its entrance down the alley, GMC’s drop-in center has provided an anchor for the local homeless community for 13 years, including a gathering space, meals, and resources for health, hygiene, communication and more. 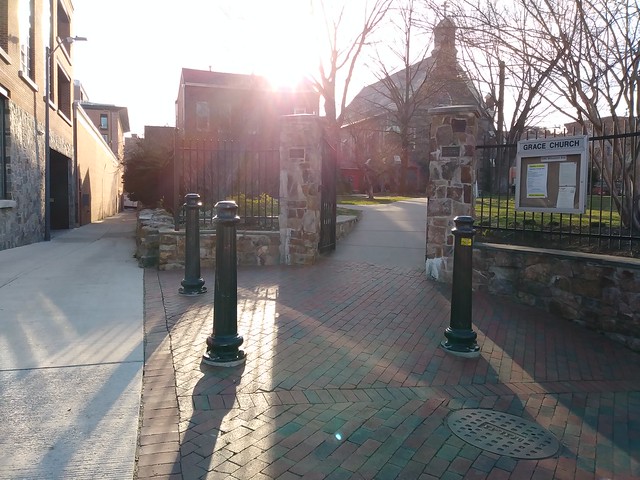 Waters Alley (left), next to Grace Episcopal Church, leads to the entrance of the Georgetown Ministry Center Drop-in, under the church. Photo by Eric Falquero

Due to its historic designation, the church property is exempt from accessibility guidelines usually required by the Americans with Disabilities Act, yet GMC’s leadership wanted the facilities to be as inclusive and accommodating as possible. Once this simple modification was considered, the organization began to dream big about how to best serve their guests.

Minutes before a March 19 ribbon-cutting ceremony, three frequent guests toured the new space for the first time and each independently uttered the same phrase.

“It’s beautiful,” said Ricardo, who had started coming to GMC a few months before the renovation. In the interim, he has been going across town to So Others Might Eat to meet his basic needs. But having a program closer to where he sleeps and spending time with the other regulars makes him feel connected with the community.

An architect was consulted and the intimate reception area was turned into an open floor plan sporting a new coat of light-green paint. The laundry room was expanded and fit with two additional machines, doubling previous capacity. And the immaculate new shower is spacious and wheelchair-accessible with no barriers on the floor and an easy-to-use hand-sprayer. It is connected to a brand new water heater, increasing the capacity for warm showers. The renovation created an office setting for staff and volunteers and made space for double the laundry facilities. The finished interior also received a new paint job. Photo courtesy of Carolyn Landes / Georgetown Ministry Center

“It’s brighter, it looks like they squeezed and opened up more-space, that’s good” observed Mike, who’s been coming to Georgetown Ministry Center almost daily for the past year.

“There’s more space over there,” said Tony, an artist who has been utilizing the center for eight years.

“Yeah, that was a tight spot,” Mike agreed.

He compared seeing the new facilities to returning to your parents house after going away to college, and finding that your room has been fixed up. “It’s familiar,” he said, adding, “For a lot of people, this is home.” 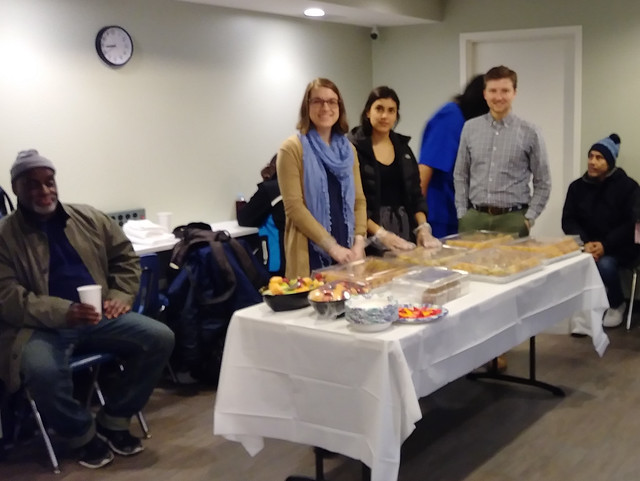 Until the weather became too cold in December, GMC staff and volunteers operated a table in the alley to maintain meal and mail distribution. The organization’s street outreach program, separate from the drop-in center services, continued uninterrupted. As temperatures dropped and renovations continued, the church allowed the drop-in center operations to move into the sanctuary for six hours per day. Other churches also opened their facilities to provide replacement shower and laundry options for the community. 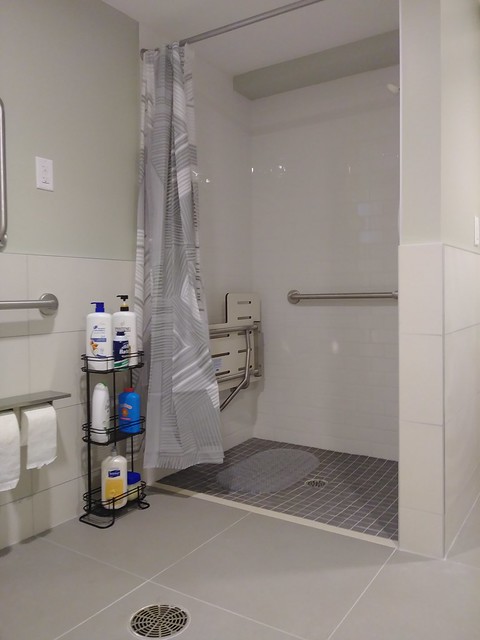 The new ADA-compliant shower that started it all. Photo by Eric Falquero

“Grace Church has been so good to us in letting us go in and reconfigure their space,” said Alex Bullock, a volunteer, donor and former board member who has supported GMC since the mid-90s. He described being continuously impressed by the usage statistics of the shower, laundry machines and computers over the years. “You recognize the need and the difference that it makes. We always laugh and say it’s because the shower needed to be re-done that started this whole thing. But you realize that the showers and the laundry are really important.”

Mike said these basic resources are the small things people with housing take for granted. As a former anthropology professor, he recommended anyone that wants to understand the homeless experience start by not showering or washing their clothes for two-weeks straight. He said the lack of access to these services can impact how you are perceived by yourself and others. The sense of belonging and community that is fostered at GMC helps counteract those feelings.

“The volunteers make this place. Me and the staff and the other guys, we always fuss about the coffee.” Mike laughed and said, ”You can’t mess up the coffee, or God is not pleased!” Rev. Sarah Motley of Grace Church kicked off the brief ceremony with a prayer and a blessing. She was followed by GMC Board President Jerry Cassidy, who welcomed everyone back, including new executive director Lissa Ramsepaul, and outlined the organization’s plans to increase outreach to serve more community members. Mike was given the honor of cutting the ribbon before the small crowd rushed inside to warm up and share breakfast.

“It’s a resource for all those things people need,” Mike said of the drop-in center. “It’s a church, it’s a hospital. On cold freezing winter days, you come in, sit down and get warm. You need help getting your birth certificate, they help you with ID. You need to a shower, you take a shower. Then you go out and you face the world. It doesn’t change the world, but it makes it easier.”