LaShawn Lopez brought her four young children to the doctor’s office on an evening in late October. The Lopez family lives in the D.C. General Family Shelter, which is situated in a dilapidated former hospital building on the southeast side of the city.

Their commute to the doctor was short. From their place in the shelter’s west wing, they walked less than a block, just past an empty playground and the barbed wire fence surrounding the city jail, before reaching the shelter’s main building. On the fourth floor of the shelter is Hoya Clinic, a walk-in clinic that is free to everyone regardless of insurance coverage.

The clinic is a Georgetown University initiative run completely by volunteers. It is open on Tuesday and Wednesday evenings from 6 p.m. until all patients are seen, which can be 10 p.m. on nights when there are 10 or more patients. As a rule, when residents of D.C. General Family Shelter get sick, they head upstairs to Hoya Clinic.

Once inside the clinic, Lopez’s oldest daughter zoomed onto an exam room table and said, “Superman needs a checkup!” Several other superheroes and princesses occupied the waiting room in anticipation of their own checkups — it was the night of D.C. General’s Halloween party. That evening, Lopez brought in her children because two of them had red, gooey eyes. The first people to visit the Lopezes in the exam room were two medical students: a first-year who was charged with taking the children’s vitals and a third-year to help facilitate the interaction.

There is a long waiting list of medical students who want to volunteer at Hoya, explained first-year medical student Janet Shin. Gaining practical experience is only one reason for the high level of interest. “We can make a tangible difference in people’s lives here,” Shin said.

The Lopez family, who had been to Hoya Clinic five times previously, is grateful for the convenience it offers them. Having just walked over from next door, Lopez considered her options. “If the clinic wasn’t here, I probably wouldn’t have taken them anywhere just yet,” she said. “And if it got worse, I’d probably take them to the emergency room.”

Emergency room usage is high among people experiencing homelessness, whether or not they are insured. In addition to being exposed to more dangers, competing priorities like food and shelter can cause homeless people to either neglect primary care altogether or turn to the emergency room when unmanaged symptoms worsen. As many as two-thirds of homeless people visit an emergency department annually, according to a University of Massachusetts study.

Dr. Jeffrey Toretsky, the attending physician that night, said the services Hoya Clinic provides are not that different from other clinics. It is the convenience for shelter residents that makes it unique. “We do physicals for job seekers, vaccinations for kids,” Dr. Toretsky said. “Things that would have been a hassle otherwise make a difference.”

Outside of the Lopezes’ exam room, Dr. Toretsky conferred with two medical students. The children’s likely diagnosis was conjunctivitis. Had the case of gone untreated, the contagious infection could have spread across the tight quarters of the shelter, or even at Lopez’s youngest daughter’s preschool.

Hoya Clinic provides a necessary service by bringing medical care directly to the underserved. The last order of business for the Lopezes before leaving the clinic was picking up their prescription, free of charge. 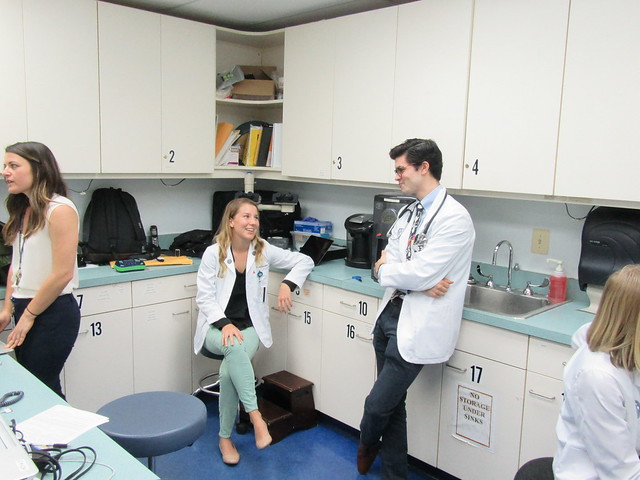