District Displaced held an exhibition of photographs taken by homeless photographers Lance, Glenn and Robin on January 29 at the White Room DC.

Robin, who has been previously interviewed by Street Sense, did not attend the exhibit. District Displaced founder Mark Thomas explained that Robin was concerned that if he spent a few hours indoors, it would be difficult to return to the cold. Glenn also did not attend. However, Lance was in attendance, determined to make it to the event despite being taken to a mental health center against his will during the previous week’s snowstorm. He was released three hours before the exhibition began.

Mark Thomas began District Displaced while a student at Catholic University. He revitalized the project two months ago while working as a freelance photographer. District Displaced has a strong social media presence, but the exhibition gave people the opportunity to see the physical photographs and meet a contributor.

“Being here in person, we’re able to meet someone who takes the photos,” Jemila Morrison told Street Sense. Morrison recently moved to the District from Charlotte, North Carolina. “Everywhere I’ve visited here — Dupont, the National Mall, Friendship Heights — as soon as I step off the Metro there’s someone who is homeless right there,” Morrison said.

Lance served in the U.S. Navy for three years and was a cook in D.C., Maryland and Virginia for thirty years. He can usually be found in the area of Edward R. Murrow Park, near the World Bank. He spoke about his time in the mental health facility and how he was taken in against his will. Lance explained that his ministry shines light on issues people experiencing homelessness face daily.

“My ministry is 24/7. I am always preaching and teaching and showing love to the homeless,” Lance said.

Many of the people who work and live near the park bring him donations of food and water that he distributes to others experiencing homelessness. He said God called him to the ministry in October 2014 and he accepted. Lance’s setup at the park serves as a place where people experiencing homelessness can pick up supplies as well as somewhere anyone can come to learn about God. It also attracts the attention of federal Park Police, whom Lance photographs frequently when they arrive to remove his encampment.

Several World Bank employees who pass Lance when they cross the park for meetings or to go to lunch attended the event.

“He always says ‘God Bless’ or ‘Have a blessed, safe day!’” said Berenike Schott. “It’s like there’s two different worlds there, between the park and the offices.”

“We work at the World Bank and the mission is to end poverty; the paradox between the buildings and the park is striking,” said John Rennie, another World Bank employee.

“What can we do?” Julia Heckmann and Simone Balog asked Lance.

“Hand warmers. We need hand warmers and foot warmers. These are really good,” he answered, holding up a pack of HotHands that had been donated.

“Understanding the needs is important because the first thing you think about is food, and that’s not necessarily always as much of a need,” Heckmann told Street Sense.

This type of discussion is what Thomas hopes to encourage through District Displaced, though he also believes the photos stand on their own merit.

“The conversations we’ve had with Lance are meaningful,” said Berenike Schott. “The detail in each photo he explained was interesting.”

Thomas, who regularly travels with a trunk full of donated clothes and disposable cameras, is currently working to make sure every area in the District is represented through photography.

“We’re continuing to get more contributors. This project isn’t exclusive. It’s inclusive,” Thomas said. “Our contributors are mostly in the Northwest area, so we’re looking into going into other parts of D.C to find people who have a story to tell. Homelessness is happening in all eight Wards.” 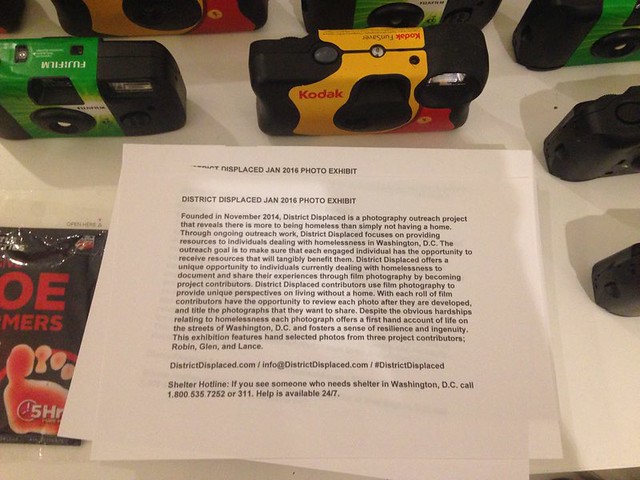