Franklin Square Park is the second-largest green space in the capital’s urban fabric. The location of this 4.79 acre plot, between K and I Streets NW, makes it a likely site for people to congregate for lunch, participate in outdoor activities and escape from the chaos of city life.

In a recently formed partnership, the District joined with the National Park Service to develop and manage this federal park land so that it serves a broader public use. The plan includes a café, public restrooms, an improved central fountain, and a children’s play area, with a projected cost of $18 million. Plans for renovating the park are being finalized and the city aims to break ground in late 2017 or early 2018.

Few passersby spend time amid the park’s crumbling sidewalks, broken central fountain and general lack of security. The majority of foot traffic is along the park’s periphery, where food trucks set up shop during weekday lunch hours. However, that doesn’t mean the interior of the park goes unused.

Density maps provided by the Downtown Business Improvement District (BID) indicate that Franklin Square Park is the area of the BID most populated by homeless people. Franklin School, a national historic landmark across the street from the park’s eastern side, was opened as an emergency shelter in 2002, after a surge in hypothermia deaths the previous year. It functioned as a homeless shelter for six years. At times the iconic building housed more than 300 people, but the city never intended that the building be used long term as a shelter, and it was closed in 2008, during the administration of Mayor Adrian Fenty.

Many people who had been taking advantage of the shelter moved across the street to Franklin Square Park. In 2011, Occupy D.C. argued that the building should be reopened for public use, perhaps again for the purpose of a shelter. They broke into Franklin School, which was empty, and staged a sit-in that lasted three hours, until the police intervened. The building remains unoccupied and the city is seeking a private developer to buy and remodel the property, which has historic landmark designation. A study done by the Department of General Services after the shelter closed indicated the building has lead and asbestos contamination. 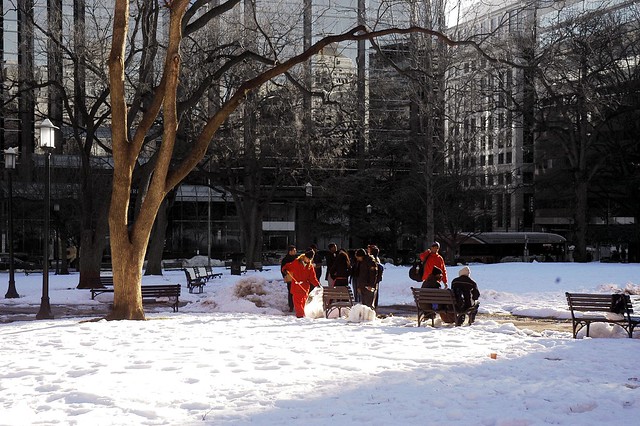 Frequent users of Franklin Square Park, such as Dr. Catriona Laing, Interim Associate Rector for Church of the Epiphany, believe development of the park is inevitable. In December of last year the Washington Post moved into a building directly overlooking the north side of the square, bringing into the area a greater density of workers who utilize services during the day.

While some people who reside in the park had heard about a plan to redevelop the space, most park dwellers approached by Street Sense knew nothing about the plan and were shocked about the news.

“Really?! Will they even let the homeless in here now?” asked Rafael Caban, who said he uses the space daily. Caban noted that about half of the park’s users are long-term residents and that the park reaches its peak homeless population on the weekends. Caban said that more security is needed at night.

The current plan is to develop the park one half at a time, to allow those who use the space now to continue to use it during its development. There are at least two years until construction begins and plans often change, so people who utilize the space now may face displacement. Even if only half the park is developed at a time, loss of space is likely and there may be overcrowding that causes the homeless occupants to disperse throughout the city. Brandon Leonard, who has been using Franklin Square Park for over a year, predicted that homeless people who reside in Franklin Square Park will move to nearby parks such as McPherson Square, Farragut Square and Lafayette Park.

Dispersion of people experiencing homelessness throughout the city creates a challenge, not only for those people but also for service providers. Many groups use Franklin Square Park as a central location to distribute food, clothes, and hygienic items. Street Church, a volunteer organization located in the Church of the Epiphany, participates in the distribution every Sunday and Tuesday. They hold a 30-minute Eucharist service and then provide sandwiches, potato chips, fruit, granola, and, in cold weather, hot soup. 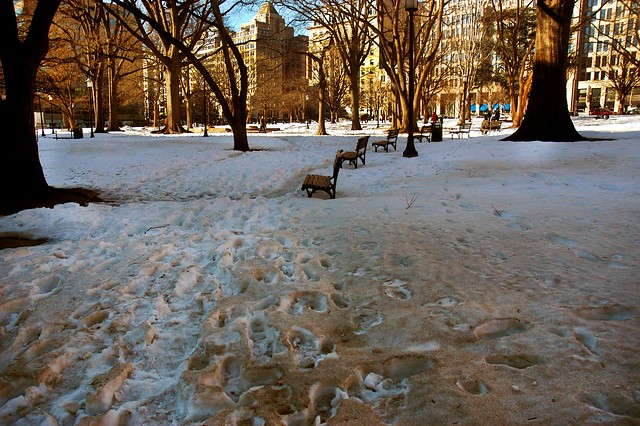 Laing is the rector for Street Church and accompanies the volunteers each week. She described the scene: “You’ve got all the people in suits from the offices coming down to the food trucks to get their lunch and you’ve got other people gathering in Franklin Park for this Eucharist and to be given their lunch. There is definitely a tiny bit of, kind of, mixing up of those two worlds in the park.” She believes that in this way the different worlds can see and acknowledge each other. Laing recalls that some Street Church volunteers joined the group after they stopped to ask what she was doing and how they could help.

These renovation plans concern service groups such as Laing’s. With proposed new additions to the park that include a place for outdoor yoga, an outdoor movie theater, and a café, many volunteers wonder if space will be available for the distributions to continue. Laing is concerned that many homeless people may feel uncomfortable coming to the park for food if no safe space remains for them among the new activities. Although she has a permit, she feels unsure that it will be sufficient for her to continue distributing food if space is limited.

Street Church is not the only service that distributes food and resources in the park. Martha’s Table is also active there, visiting the park seven days a week, 365 days a year. They typically bring between 65 and 75 meals each night, and bring additional resources such as winter coats through McKenna’s Wagon once the weather gets colder. During the recent blizzard, McKenna’s Wagon visited all three of its stops every night to distribute necessities.

As the plan for Franklin Square Park develops, many homeless people are unaware of the potential changes and how they will be affected. Many are shocked to learn how drastically the park will change and how little space will be left for them. The city has a record of not informing homeless people about forced relocation in the past; an example is the recent closing of the Foggy Bottom encampment near the Watergate building. During that closure, in autumn 2015, people living in the encampment did not know if they would have anywhere else to stay besides the shelter system they refused based on its condiitons. As a result, many were dispersed throughout the city with their belongings and tents thrown out. 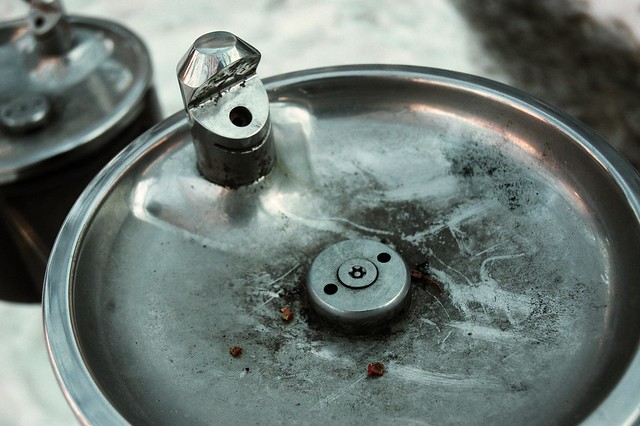 The development is scheduled for two years from now, and the plans do seem subject to change. People living in the park and surrounding areas hope that officials will consider adding construction of public bathrooms, open 24/7, to the plan, since bathrooms built for the café may only be open during café hours and a person may be required to make a purchase to have access to the bathrooms. Dr. Laing hopes that there will be a place where caseworkers can meet with clients. Many people see the redevelopment as an opportunity for D.C. public officials and the National Park Service to improve the park in a way that helps all residents living in the area, whether in the apartment buildings or on the park benches.

Jack Evans is the council member for Ward 2, which includes Franklin Square Park. Evans favors making improvements in the park and attributes its current state to the fact that it is managed by the federal government. “Federal control through the National Park Service, of what should be a local park, has led to the lack of maintenance of Franklin Square over the years. As I understand it, the NPS has over $11 billion in deferred maintenance, and with the National Mall and monuments in the District, it’s not surprising that Franklin has been forgotten,” Evans said.

While he suggests that the “federal government should transfer ownership of the park to the District of Columbia [to] provide local care and maintenance for [the] local park,” this appears to be aspirational. Focusing on the present proposal, Evans told Street Sense that “better utilizing the space to accommodate multiple groups at the same time will benefit everyone who wants to use Franklin Square Park.”