This Christmas, Martha’s Table distributed over a 100 hot meals to people experiencing homelessness in D.C., as part of their ongoing daily food distribution program, McKenna’s Wagon.

This was in addition to dozens of dry and shelf-stable meals distributed that day. Martha’s Table Assistant Director of Office Operations Natalie Rojas spearheaded the effort on Christmas Day, having done it over 100 times in the three and a half years she’s been with the nonprofit. A Street Sense Media reporter rode along with Rojas.

This Christmas, I’ll be riding on the @MarthasTableorg McKenna Wagon, which will be distributing 200 meals to people experiencing homelessness in D.C.! Follow this thread for updates. @streetsensedc pic.twitter.com/ah5C7FMZIO

The McKenna’s Wagon program distributes food at two locations: New Jersey Ave. and I St. NE just outside of Chinatown, and 15th and I Streets NW at McPherson Square Park. Even through pandemic operation restrictions, Rojas says they have been able to distribute every single day this year.

“I’m glad we could do this throughout COVID times,” said Rojas. “I don’t know what I would have done if I couldn’t do anything.”

They’ve been able to achieve this through staff involvement in the otherwise volunteer-led program. As most of McKenna’s Wagon volunteer drivers were elderly, during the pandemic, Martha’s Table saw a drastic decrease in the number of volunteers. Whitney Faison said that on days when there are no volunteers, the CEO would step up to help drive the vans.

“This is a 365 day operation,” Faison said. “We know how important it is to show up everyday, we’re committed to that. We will do whatever we need to do to fulfill our mission.”

Other obstacles include police roadblocks and protest routes during the Black Lives Matter protests in the summer, that sometimes blocked the way to these locations. But Rojas said they were still able to park nearby and guide people who were waiting to their location.

In June, McKenna’s Wagon could be seen passing through a National Guard blockade several blocks away from the McPherson Square stop, with then Volunteer Engagement Manager Robbie Delaey sprinting to the normal location to let people know that food was still available nearby.

“They always know we’ll be there,” Rojas said.

Usually, Rojas said, the volunteer list for distribution on Christmas Day would be fully booked weeks in advance. But as Martha’s Table drivers are mostly elderly, the nonprofit has seen a drastic reduction in volunteers due to the pandemic. Regardless, Rojas packed food into the van with help from her partner and two people from the Osei Foundation, a public family foundation who provided 200 hot meals for the day. The food was prepared and catered by Shareen’s Cuisine, a catering company in Richmond. 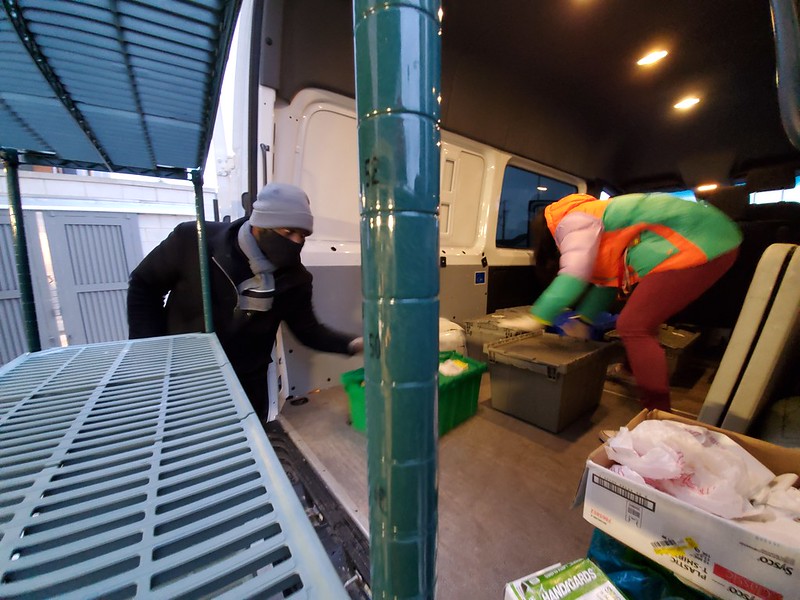 McKenna’s Wagon, named after Martha’s Table founder Horace McKenna, is a program. But it is also a large van specially built to hold much more food than a typical van. The wagon is used on special events such as Christmas, Easter and Thanksgiving, while two or more normal-sized vans are sent out for standard daily distribution.

People have come to rely on Martha’s Table’s daily distribution. Through freezing temperatures, people lined up to receive food, water, and blankets.

Bethany McAllister, who has been homeless in the District for three and a half years and currently stays at Patricia Handy Place for Women, said she’s been picking up meals from the wagon on New York Ave. and I St. for two years. 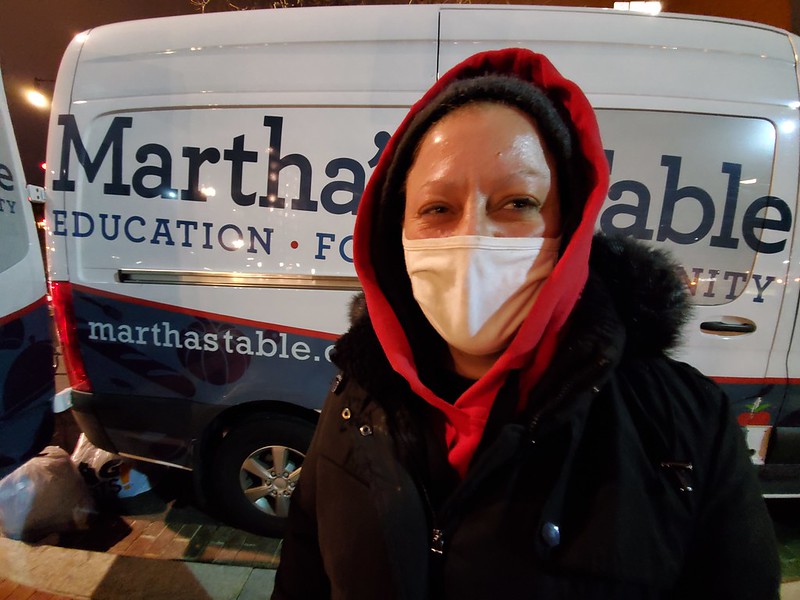 McAllister is vegetarian and says she has always been able to rely on the wagon to provide that meal option. She says the meals from the wagon are much better than what is provided at the shelter.

Christmas Day netted fewer people at the wagon than usual, according to Rojas. Street Sense Media counted 10 people lining up at the first location, and 35 at the second location. Rojas says that on a normal day, 100 people would line up at 15th and H streets, down the road and extending around the corner.

She said this is normal on holidays, when people may stay at a hotel or a relatives’ place for the night. That was the case for Robert Coleman, a father of five who was staying at his friend’s place for the night with his family. He was McKenna’s Wagon’s last customer, rolling up to the van with two kids and a stroller holding his youngest child. All wagon volunteers helped pack meals into a cardboard box, and tucked a blanket into the stroller to keep the child warm. 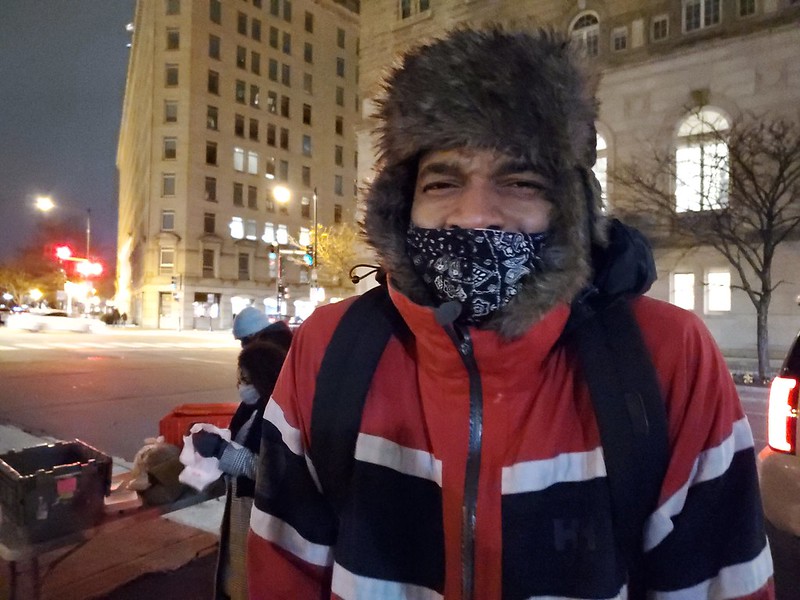 Coleman and his family moves between friends’ and relatives’ houses and hotel rooms, and will come out during the day to panhandle for food. While he and his family have shelter for Christmas, he says their situation changes daily. They have also been waiting for a Section 8 voucher for eight years.

“It’s been hard,” Coleman said. But still, he was able to get some gifts for his kids. “My kids didn’t get everything they wanted, but they got some stuff for Christmas so they’re happy.”

With the lower turnout, volunteers were able to give out double meals to people who requested it. By the end of the night, they had close to 75 hot meals left. Samuel Osei and Danielle Stewart, co-owners of the Osei Foundation who provided meals for the night, transferred them to Osei’s car and gave the rest out to people experiencing homelessness at Union Station and the tent communities on M and L streets NW.

Most of the meals for the night were meat-based with vegetables. The Osei foundation also runs It’s Electrik, a company that sells plant-based diet products and produces educational materials about the benefits of this lifestyle. Stewart said the company has been working since the summer to integrate its resources with the foundation’s homeless services and put more focus on providing affordable plant-based options for low-income communities

“Just speaking with Martha’s, there are people out today that are vegetarian,” Stewart said. “The next time we do this, we want to have plant-based meals. We really want to provide [the] homeless, impoverished community that healthy option.” 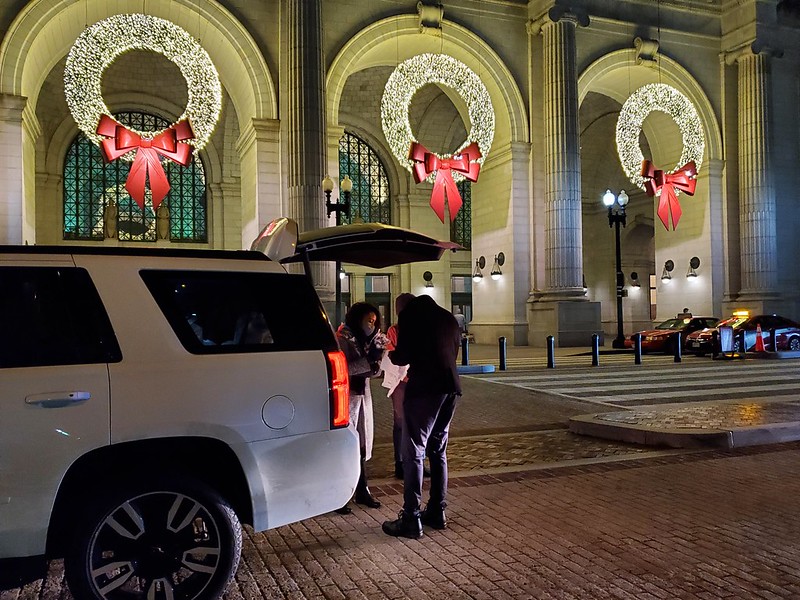 Danielle Stewart and Samuel Osei packing food and water to give to a person experiencing homelessness at Union Station on Dec. 25, 2020. Photo by Athiyah Azeem

The foundation has often distributed food in this area, as noted by several people experiencing homelessness staying in Union Station. But this is the first time they have partnered up with a nonprofit to distribute food.

“We figured it would be better to go with someone like Martha’s Table who already has routes set up in D.C.,” Osei said. By the end of the night, they were able to distribute 25 more meals, and gave out the rest to a shelter in Richmond.