“Our voices are unique, we want to be heard and respected,” was sung repeatedly throughout the event, setting the stage for these young poets along with music played by members of the Chuck Brown Band.
“I was fighting for my life and I didn’t want nothing to do with no books or poetry, but after a while I [saw] that in the end they could help me,” Phill Mosley, a member of Free Minds, told the audience.
Mosley was incarcerated at age sixteen. Free Minds showed him “lots of love and support during a very difficult time.” After Mosley served his sentence, Free Minds helped him find employment while still encouraging his writing.

The now 17-year-old shares his poems as insight for other youth on “how to change and how to go about changing [their lives].”

“It was inspiring, and the music with it makes it more relaxing,” said Terri Ford, an audience member at the festival.

Free Minds founders Tara Libert and Kelli Taylor previously worked as television news producers. They had both reported on incarcerated youth who were charged as adults.

“It was really frustrating to just cover crime and incarceration in prisons and not see much rehabilitation happen,” Libert said.

Libert lamented received a letter she received in 2002 from a 17-year-old on death row. He was executed later that year. 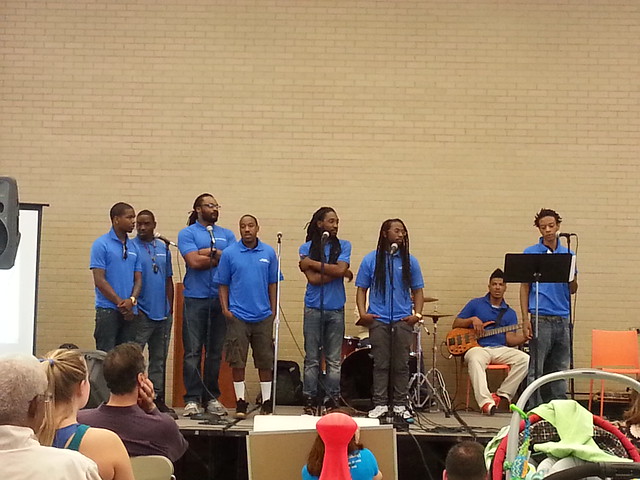 Libert and Taylor began volunteering at the local D.C. Jail after the teen’s execution. They believed that the best way to connect with youth was through writing. Thirteen years later, the book club has worked with almost 1000 incarcerated young men.

“We used the tools of books, book discussions and creative writing to bring about personal change,” Libert said.

Another youth charged as an adult at the age of sixteen, Aaron, was introduced to Free Minds a few days before his court date. He was given a book and finished reading it that night, joining the book club soon after.

Today, Aaron sees Free Minds staff as family and loves sharing his story “and his pain.” He wants others to know that being caught up in the system doesn’t make you a bad person.

Free Minds’ goal is to share incarcerated youth’s stories with as many people as they can.

“The kids that are locked up are falling through the cracks,” Libert said. “[They] were thrown into the chasm, this deep hole where they are so abused in the adult system and so beat down, and no one can hear their cries.”