On May 18 Lance arrived to the U.S. District Court for the District of Columbia, Bible in hand. It was wrapped in a plastic bag for protection from the rain. Two rosaries swung from his neck as he placed his belongings on the conveyor belt to be scanned. He checked his two bags, his phone, and his disposable camera at the door.

“It’s kinda ironic you know,” Lance said as he boarded the elevator, “they took my water bottle, but let me keep my mouthwash,” he opened his coat pocket to reveal a large mint mouthwash bottle. 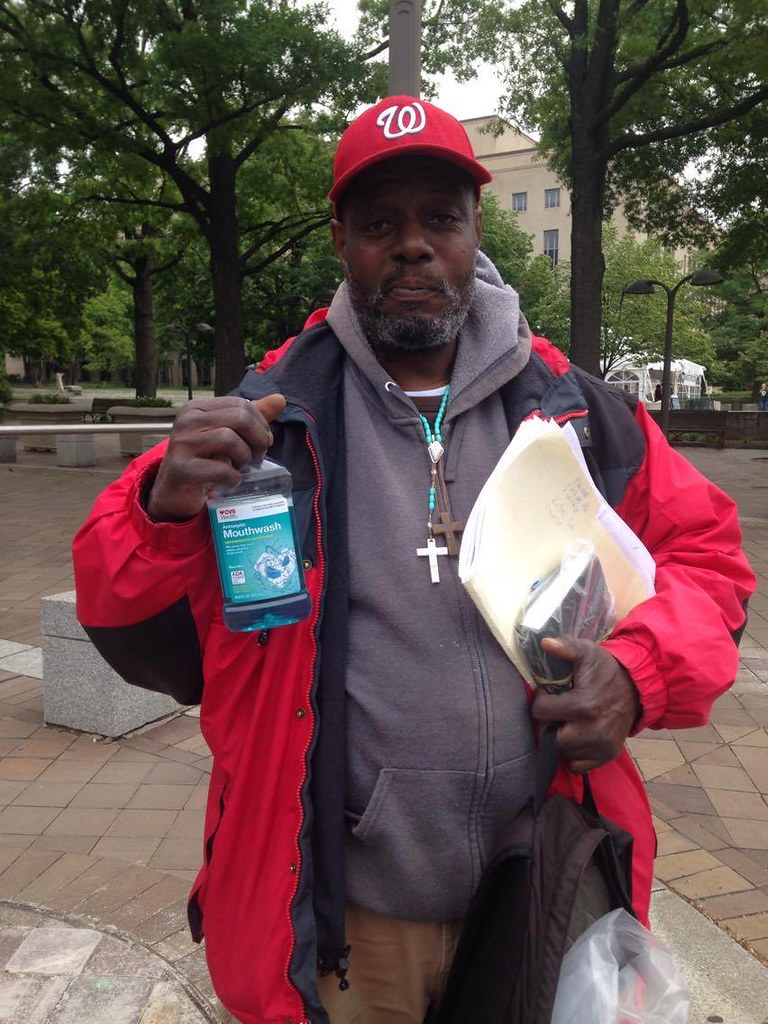 “Preacherman” Lance found it interesting he had to give up his bottle of water while entering federal court, but was able to retain his bottle of mouth wash. | Photo by Colleen Cosgriff

This isn’t the first time Lance has had his water confiscated. On March 3, 2016, Lance’s Murrow Park ministry items were confiscated as evidence and he was arrested by D.C. Park Police. Moments before his arrest, Lance had carried six cases of water from CVS to the park, which he claims Park Police officers would have seen from their vehicle. Lance was issued tickets for “violating camp conditions,” “camping outside a designated area,” “violating closures and public use limits” and “creating or maintaining hazardous or offensive condition.” Each charge could result in a $500 fine and/or up to six months in jail.

“Lance Johnson was observed in Murrow Park camping and impeding use of the park–thus creating a hazardous condition. His belongings were reported to be blocking the use of benches and sidewalks within the park. There was no item in particular that was deemed hazardous,” Sergeant Anna Rose, the DC Park Police’s Public Information Officer, said in an email interview with Street Sense.

The confiscated items were not just for Lance. Lance, who is currently unhoused, spends most of his time in front of the World Bank at Murrow Park, preaching the Gospel and distributing valuable resources to anyone who may be in need. Lance accepts donations from the people who pass by, including items such as food, sleeping bags, and water.

“Not all the ‘evidence’ they took was mine, it was a lot of other homeless people’s I’d watch while they got food or looked for a job,” Lance said in an interview with Street Sense, “When they saw all their stuff was gone, all their sleeping bags were gone, they were crying. And it snowed that night.”

Because Lance was issued citations, he was not entitled to a District-appointed attorney. However, Jane Zara, a local attorney, decided to help Lance review his case and understand the legal process. One of Lance’s case managers, Sheriff Kadir, was also present for the hearing. All three hoped Lance would regain possession of the confiscated evidence and would not have to pay fines or be sentenced to jail.

Before the hearing, Prosecutor Angela George met with Lance, Kadir, and Zara in the courthouse hallway. This meeting was closed to the press, but all three said Prosecutor George explained she had tried to reach Lance to return his property months ago. Prosecutor George said she left a message on the phone with a woman, but Lance, Kadir, and Zara said they hadn’t received any messages regarding his confiscated property. Prosecutor George also said that she would recommend that the case be continued until August, giving Lance about three months to find housing. Both Zara and Kadir were optimistic about the prehearing meeting.

“It sounds like they’re hoping to break the cycle so Lance can get housing. In this case, they’re sympathetic, but this doesn’t happen all the time,” Zara said in an interview with Street Sense.

“The court is glad to see case managers, they’re glad to see the process moving along, they don’t want to fill another jail cell,” Kadir said.

Once the hearing began, Lance sat alone in front of the judge.

During the hearing, Prosecutor George said, “Mr. Johnson is in residential transition. [Continuing the case until August] will allow him to finish the process of obtaining housing.” She stated to the judge that she attempted to contact a case manager to return Lance’s belongings to him months ago. In conclusion, she said the court would work to release his property, but it would not be released that day.

The Judge agreed to continue the case until August 17.

“Thank you, your honor. God bless you,” Lance said as the hearing ended.

Lance maintains that neither he nor any of his case managers ever received a phone call from George, but he decided not to comment on that in front of the judge. He said it was because the court is willing to continue the case.

Both Kadir and Zara were glad to see the court consider Lance’s housing situation and continuing case. The next step is to find a place for Lance to live and to store his ministry belongings.

“I’m happy with the outcome,” Zara said after the hearing, “This is the best case scenario I’ve experienced.”

Lance is currently in the process of finding housing. He says even once housed he plans to continue his ministry in Murrow Park, preaching the Gospel and serving those in need.