Navigating homeless services is complicated. A new downtown center makes many of them available in one place

A new day center for individuals experiencing homelessness has opened its doors on at the New York Avenue Presbyterian Church in the heart of downtown D.C. At a Feb. 25 ribbon-cutting ceremony, D.C. Department of Human Services Director Laura Zeilinger described the service hub as “a space not defined by fragmented programs.”

That is a marked contrast to the situation that often arises. “I found [homeless services] challenging to navigate with clients,” Christian Howard, a former case manager, explained in an interview. “You’re going out into the community, picking up your clients, and transporting them to different organizations to get their needs meet.” And not everyone experiencing homelessness encounters someone like Howard who is prepared to take them from one part of the city’s patchwork of services to the next. 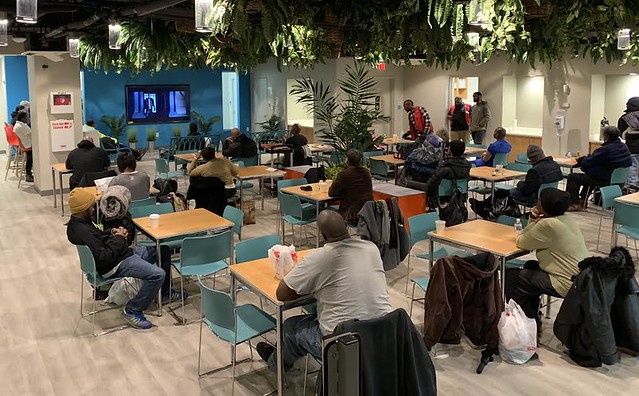 Four days after the ribbon cutting ceremony, individuals sit in the center’s common area to watch a movie on March 1. Photo by Jordan Tobias

At the D.C. government’s new Downtown Day Services Center, however, homeless individuals can find everything in one place.

Howard now supervises case managers for the downtown center, which is managed by the DowntownDC Business Improvement District and offers a variety of services provided by D.C. government agencies and their nonprofit partners, including Pathways to Housing D.C.. She said she “loves the fact that the center is a one-stop shop,” mindful of the hardships she faced as a case manager.

The center operates Monday through Friday from 9 a.m. to 5 p.m. at 1313 New York Ave. NW. Homeless individuals can get hot meals, do laundry, take a shower and accomplish other immediate needs on-site. They can also request help with critical needs for long-term stability, such as health care, housing, employment, and legal assistance. 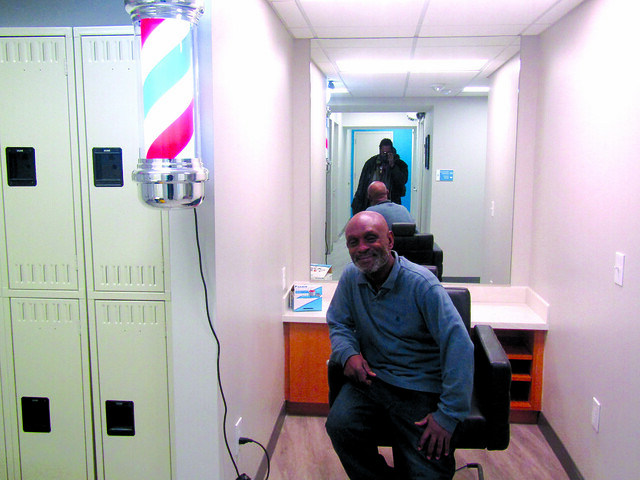 Robert Warren, a Street Sense Media artist and vendor, checks out the haircut station that’s beside a locker room where personal belonging of individuals can be stored. Warren belongs to several advocacy organizations focused on ending homelessness, including the People For Fairness Coalition, which advocated for a day center for several years. Photo by Reginald Black

Unity Health Care physicians will provide an array of medical care during the week from 9 a.m. to 11:30 a.m., except on Tuesdays. “If somebody has high blood pressure, diabetes, or HIV, they can come here and we’ll prescribe their medications,” physician Catherine Crosland said.

To be eligible for services, individuals only need to sign in at the front desk, where BID staff members in red vests greet them once they step off the elevator. However, people pursuing housing assistance will be asked to prove a history of chronic homelessness.

While IDs are not needed to utilize the day services center, not having identification documents can make it virtually impossible to be hired or to receive benefits and housing assistance and ultimately escape homelessness. The Department of Motor Vehicles and the Department of Health’s Vital Records Division will have staff members at the center to assist clients with obtaining an ID. 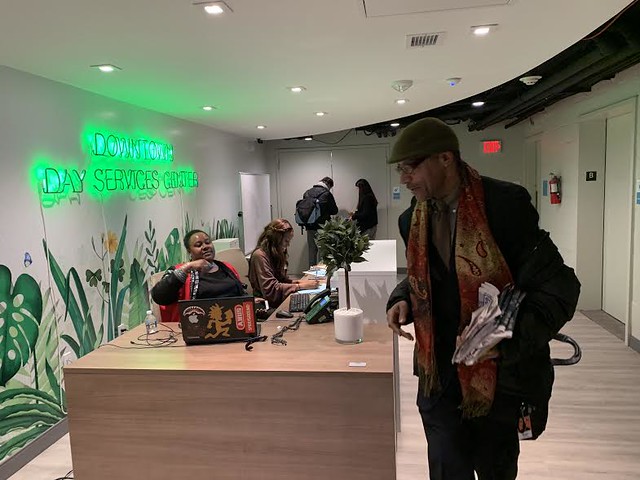 The center is expected to serve 100 clients per day, according to the Bowser administration. The new downtown facility fits into the city’s strategic plans to end long-term homelessness by 2020 and to reduce opioid deaths in the District by 50 percent by 2020. HIPS, an organization best known for providing safe sex kits in the city, oversees distribution of the opioid reversal package naloxone free of charge at the center.

When the city announced in August that it would spend $1.7 million to establish the center, the mayor had planned for a Nov. 1 opening to coincide with the start of “hypothermia season,” when falling temperatures become much more likely to threaten individuals’ health and safety. Issues such as asbestos abatement, however, contributed to delays in the construction work inside the church basement where the center is located.

The DowntownDC BID previously operated a day center for people experiencing homelessness from 1998 to 2007 at First Congregational United Church of Christ at 10th and G streets NW, according to the BID’s website. The center was closed when the church was renovated and did not reopen in the new space. More recently, First Congregational began hosting a drop-in center for homeless youth in partnership with the BID and Sasha Bruce Youthwork.

In the absence of a downtown service center, advocates for the homeless community have highlighted the urgency of opening a replacement facility. While city officials acknowledged the need, a new downtown space was not readily identified. In 2015, the District government launched a day center in Ward 5 next to the Adams Place Emergency Shelter that is still in operation. The on-site services were well-received, though the location was inconvenient to some potential users.

A year before the Adams Place Day Center opened, the D.C. Public Library hired a social worker to coordinate human services throughout the library system, whose branches are regularly used by homeless patrons. The Martin Luther King Jr. Memorial Library at 9th and G streets NW — at the other end of the block from First Congregational Church — served as a de facto day center for years, with attorneys and nonprofit outreach workers maintaining a regular presence there and the city’s shuttle van system for shelter residents operating an official stop outside. When the library closed in 2017 for a years-long renovation project, pressure increased to implement an official downtown daytime service center.

“We, who go home to our home, beds, showers and coffeemakers every single day can’t fully appreciate what it’s like not to have that sense of security for the basics of life,” Mayor Muriel Bowser said at the ribbon-cutting. “This is a one-stop [shop] to get people on a pathway to a permanent home.” 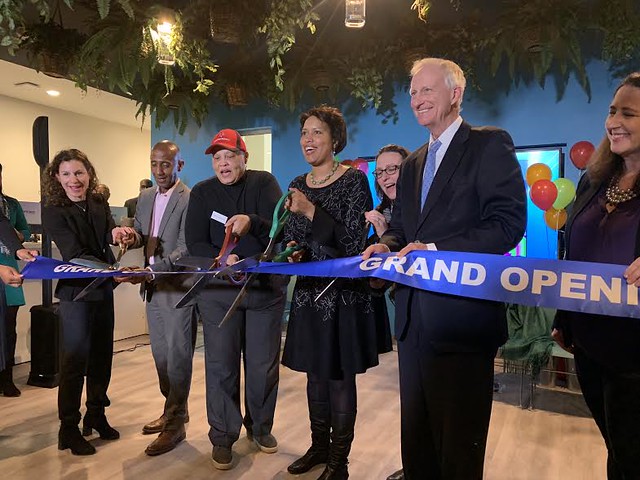 In fiscal year 2019, Bowser’s administration committed $167.6 million to projects that create or preserve affordable housing in the city. At the Feb. 25 event, Ward 1 Councilmember Brianne Nadeau requested an increase of $26 million in fiscal year 2020 to end chronic homelessness in the District. The mayor will release her proposed budget for fiscal year 2020 this month. It will then undergo review and revisions by the D.C. Council, with final votes scheduled for May 14 and 28.

Before the council’s vote, members of the public can comment on the mayor’s proposal. A hearing for the human services budget is scheduled for April 10 while the budget for housing will be reviewed on April 11.

This article was co-published with The D.C. Line.