When Michael Brown was shot in 2014, Ferguson, Missouri and communities across the United States searched for answers to complex and divisive tensions. On January 18, the Town Hall Education Arts Recreation Campus (THEARC) turned to local youth for these answers by hosting the #OurLivesMatter Youth Town Hall on Martin Luther King Day 2016.

“I can’t let problems stop me from being a solution!” chanted over one hundred young adults from six Boys and Girls Clubs of Greater Washington. The bleachers of THEARC’s gym were filled.

The goal of the #OurLivesMatter campaign is to “educate our young people but also empower them to bring about change in their own community,” said Campaign Director LeVar Jones of the FBR (Friedman, Billings, Ramsey) Boys and Girls Club branch.

“We didn’t want [youth] to feel helpless,” Jones explained. “We wanted them to feel empowered to bring about change. The biggest thing is that young people are now talking about social issues, not only talking about it, but they are educating themselves about those issues, researching those issues, finding out the historical implications of those issues.”

Jones stressed the importance of letting youth drive the ideas and focus of the event.

“The clubs are a place [where] we learn to be responsible adults, they are self-esteem boosters, we get together and show the world who we are,” said Oprah, 14. The event was an outlet for teens to come together and create, and take initiative to change their community.

Upon arrival, the attendees mingled through games, dancing and basketball. Soon after lunch and socializing they were guided into the gym for a community forum. A youth representative from each club chapter sat on the panel, moderated by rising Christian hip-hop artist Devin Turner. Turner’s multimedia company, Disciples Thru Media, produces his music and sponsors a contemporary church called Revolution DC, for which he is lead pastor. 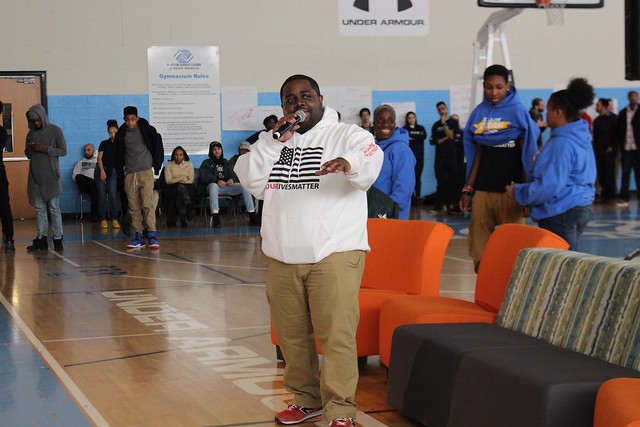 Turner spoke in a respectful and accessible way. The teens, in turn, were receptive and honest when having difficult and meaningful discussion about their communities. The conversation continued into the bleachers as a microphone was passed around. Turner asked each participant on the panel to describe one problem in her or his community.

“I face a lot of misjudgment for the way I look, but I am a peaceful person,” said Giovanni, 15.

Along with misjudgment of race, sexual orientation, and social class, the other problems discussed included drug abuse, peer pressure and stereotyping.

“Seek first to understand and then to be understood,” Turner reminded the teens. The town hall provided a safe space to analyze the obstacles within their communities and develop strategies to tackle these difficulties head on.

After the first panel presented problems from each chapter’s community, a second set of club representatives sat down to discuss solutions. They reached the overall conclusion that improving communication solves many of the problems that they face in each community. The teens recognized that educating themselves, thinking before they speak and not judging people based on their appearance are all necessary tools to build these lines of communication.

“This event is opening people’s eyes,” said Ayanna Holmes, 17 and the Boys & Girls Clubs of Greater Washington’s 2015 Youth of the Year. “Southeast Washington D.C. is not all about the gang violence and people getting robbed, there are actually positive things going on in this community, and we would just love for people to know to become part of it.”

Holmes read her poem “Brother” at the event.