A new Indianapolis ordinance requires that the city provide sufficient and adequate housing for residents of homeless encampments before an eviction can take place, according to a press release from the National Law Center on Homelessness and Poverty (NLCHP).

The legislation, which was signed into law late February, aims to end the criminalization of homelessness in Indianapolis by ensuring that transitional or permanent housing be provided by the city in the event of a camp cleanup.

The ordinance also requires a minimum of 15 days’ notice before forcing residents to leave their camp, and mandates the city to store the property of displaced campers for at least 60 days.

“On paper, I would consider it model legislation,” said Eric. S. Tars, Senior Attorney at the NLCHP, in a phone interview “It’s got a lot of very good elements, and any city including D.C. would be very wise to look at it.”

This legislation requires the city of Indianapolis to find living quarters that are both adequate and appropriate for people camping outside before they are displaced. There are a number of reasons why a shelter may not qualify as adequate and appropriate, Tars said, citing rodents, bed bugs and theft as primary issues, among others.

The protections guaranteed by the new ordinance may be bypassed in the event of an emergency, according to the press release. In this case, the city would not need to wait for adequate or alternative housing before an eviction. While Indianapolis’ efforts have been viewed by many as a positive step forward, there is concern that this clause could be exploited.

Tars said he will fully endorse this as model legislation as long as the emergency clause isn’t abused. “It’s better than what most cities have, and it’s a very good start, but we have to make sure that the exception doesn’t swallow the rule.”

In the District, many encampment residents see shelters as so deplorable and dangerous that sleeping outside is a positive alternative. In order to provide similar legislation in D.C., housing options and shelters must be supplemented and improved drastically, Tars said.

Complaints from District residents who have lived in shelters vary greatly, ranging from belongings being thrown away to neglectful staff members, according to a 2013 Department of General Services shelter complaint report. Others mentioned dirty bathrooms, a lack of hot water and mold.

Darren Staton, who lived in shelters for two years before camping near Union Station, has experienced these conditions firsthand. Weapons, rodents, bugs and constant fighting between shelter residents were his primary reasons for leaving. Although people living in the shelters were checked by security, it was very easy to sneak in weapons such as knives and razors, Staton said. “Sometimes I couldn’t sleep because I was so concerned with what the people around me were going to do,” Staton said. “They might hurt you — you never know.” 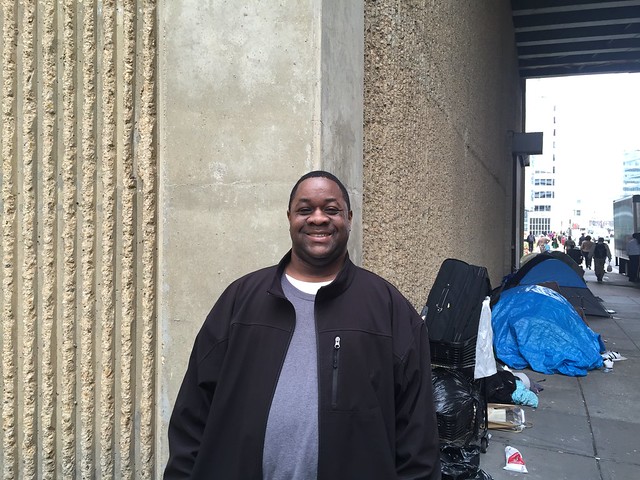 Darren Staton at the camp next to Union Station. Photo by Michael Brice-Saddler

Staton has been living at the Union Station camp for over a year. Although it is still dangerous, he greatly prefers being outside compared to living in a shelter. “Because of the inadequate conditions, encampment residents should not ever be forced to go into shelters,” he said.

If the weather gets bad or they are forced to leave due to an eviction, he and the other Union Station camp residents will simply relocate. “We’ll find another spot to hide,” Staton said. “I wouldn’t go to a shelter, but would definitely find another place to set up.”

Uncertainty looms over Staton and the other people living at the Union Station camp. Notices were posted near the camp on February 11 stating that a cleanup would be taking place “on or after” February 25.

These signs are in alignment with the District’s current encampment protocol, which was put into place in 2012. The protocol requires that a notification of pending eviction be provided at least 14 days before it takes place, and after those two weeks the city has an additional 14 days to initiate the cleanup.

The current protocol is viewed as problematic by social workers and advocates for those living in encampments. They believe that when a cleanup does not happen on the scheduled date campers are lulled into a false sense of security. This could prevent them from relocating in time or moving their belongings before the eviction takes place.

“It’s critical that encampment residents understand the process and timeline so that they can participate in their own lives,” testified Kate Coventry, a policy analyst with the D.C. Fiscal Policy Institute, during a Health and Human Oversight Hearing on February 23.

Witnesses at the hearing suggested that the government work to rebuild trust with people living in camps. The relationship between these two parties has been strained, particularly due to a lack of communication and the disposal of personal belongings, testified Washington Legal Clinic Staff Attorney Ann Marie Staudenmaier.

Data from the office of the Deputy Mayor for Health and Human services shows that between October 2015 and January 2016, 13 encampment closures have been conducted, costing the city over $170,000. According to Staudenmier, the number of camp closures has climbed to 30, and the city has only kept the belongings of residents from two of those cleanups.

Personal effects can still be seen behind some fenced-off former camp locations around town. Campers even claim they witnessed life-saving items such as tents and bicycles being thrown away during a clean up, Staudenmier said. “The city was responsible for throwing away and destroying the belongings of a large number of people who weren’t able to move their belongings from the site by the time the cleanup occurred.”

Street Outreach Specialist Caitlin DiMaina from Pathways to Housing D.C. called for more explicit signs, which would show specific cleanup dates and times to prevent any ambiguity. This type of encampment protocol would help build a partnership with people living there, and help to restore trust, she said.

Deputy Mayor for Health and Human Services Brenda Donald testified that she is willing to work with the community to define standards for encampments, and will address the disposal of life-saving items. She argued that encampment closures are drawn out to provide a chance for outreach workers like DiMaina to work with campers in order to find a shelter or seek short-term housing.

The deputy mayor may choose to suspend camp cleanups during hypothermia season — November through March — and chose not to. “Our goal is to get people housed and not have these encampments at all,” Donald said.