Homeless people are displaced often. One man’s solution: Keep your stuff on wheels

By 10:10 a.m. on April 5, there was little evidence that a tent community had ever stood near the K St overpass at 26th Street in Northwest D.C. Ten minutes after the scheduled clear-out, there was a lone city worker collecting and disposing of nondescript, unidentifiable objects while his coworkers controlled the traffic nearby. This relatively hidden area not far from Rock Creek Parkway is a very different setting than the bustling business area, where a curbside tent removal took place just one week prior on E Street. Both sites, however, are District Government property and subject to the city’s “cleanup” protocol.

On 27th and K Street., an older gentleman named Nathaniel sat only a few hundred feet away from the removal operation, but the marked difference in elevation and the busy exit ramp between him and the clear-out somehow gave him even more distance. He was in the middle of reading from a collection of Bible stories but took a moment to share his take on what had transpired. 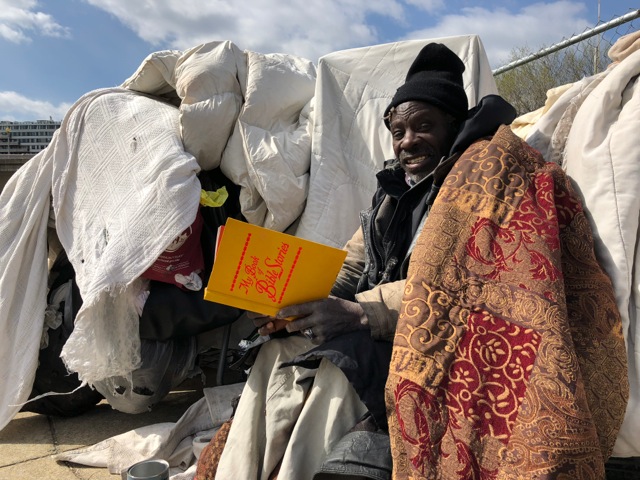 Nathaniel, sitting a block away from the cleanup, is pictured with his Bible stories. Photo by KJ Ward

“They call them sweeps,” he explained, “and they do them all the time. I like to keep my things on wheels so I can go when I have to,” he said, referring to the two covered carts behind him. “It’s like a bird that can fly away.” That metaphor conjured the idea that those who get vacated from encampments might be “sitting ducks.”

“There are places you could set up that you might could stay there for a while,” Nathaniel said, after talking about wooded areas in the District, Maryland, and Virginia, “but if you in the open like this, you going to have problems. They say you can’t be here and you can’t be there. Where you supposed to be? Up in the air?” he asked, in another bird allusion.

The metaphor was also apt, as Nathaniel seemed like an older, wiser owl perched high above and observing the public eviction. He’s seen many of these “sweeps” and said that they seem to be happening with greater frequency. “They give you some warning and put up a sign,” he said, referring to the city’s practice of posting notice two weeks in advance of scheduled clear-outs.

“The other day someone asked me why I move around so much,” Nathaniel recounted. His reply: “To stay out the devil’s way.” Despite his mobility strategy, Nathaniel hasn’t been entirely immune to displacement and dispossession. “I’ve lost things before, and it hurt,” he said, “but I always bounce back.” 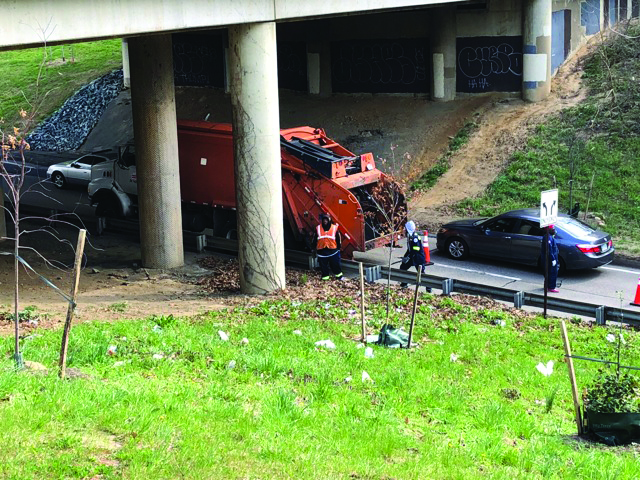 Workers from the District arrived to collect any items left out. Photo by KJ Ward

There have been at least three cleanups at this location in the last two years, not far from where a multi-week standoff with campers in 2015, spanning the Thanksgiving holiday, signaled the mayor’s decision to be vigilant about enforcing anti-camping ordinances. The $130,000 ordeal took 25 hours of agencies’ time. Five city agencies coordinate weekly under the Deputy Mayor for Health and Human Services to implement the city’s encampment protocol.

“People call and complain,” Nathaniel said. “They don’t like us around here.” “In Georgetown, the business communities think we interfering with their business,” he said before noting with much laughter, “but if you got a good business, your business is going to stand anyway. Your business is failing and you need a scapegoat!”

In the swirl of vigilance and impermanence, Nathaniel sounded confident in his ability to make his way. “I’ve been out here a long time,” he said, “and I get what I need to get myself together.”