Demonstrators stayed out overnight and started the morning off with prayer and breakfast before storming city hall. There they presented demands to fully fund Homeward DC, the District’s 5-year plan to end homelessness. Day two of the annual National Homeless Persons’ Memorial Day Vigil had kicked off at Freedom Plaza with a teach-in led by Monica Kamen.

The teach-in was held to educate people experiencing homelessness on where D.C.’s money is being spent. The District spends the majority of its budget on human support seravices such as hospitals, social services, healthcare, and the food stamp program. Kamen, an advocacy coordinator for the Fair Budget Coalition, stated that there is a total of $13 billion in the city’s budget, but D.C. only spent $223 million on housing and homeless services. 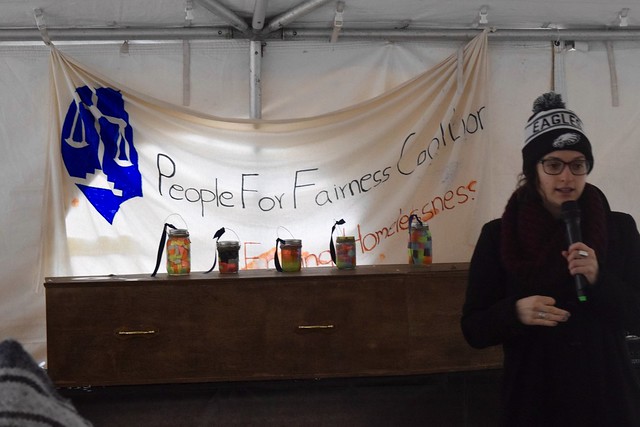 Monica Kamen leads a teach-in for People for Fairness Coalition demonstrators about the District budget. | Photo by Alexandra Pamias

“We’re people and we are human beings,” said Kevin Morris, one of the advocates who believes both the media and the politicians usually “get it wrong.”

A total of 53 people who died on the streets in 2015 were recognized at the memorial service that afternoon (names listed below). “Jane Doe” and “John Doe” were included on that list, to signify those names not collected.

Some persons go unreported to the advocacy community by those they left behind. Others go unnoticed. As of December 11, there were a total of 110 District “public disposition” cases in 2015, according to a Freedom of Information Act Request filed with the Office of the Chief Medical Examiner (OCME). Public disposition refers to cases where a persons’ remains go unclaimed after a period of 30 days. As clarified by the OCME, public disposition is not necessarily synonymous with homelessness.

“If I break the law, I am guaranteed a safe place to lay my head, a warm place to sleep, and three meals a day, but when someone does everything right, they get nothing,” said Street Sense Executive Director Brian Carome, who also spoke to the crowd of activists that morning. He talked about remembering Roberta Bear, a Street Sense vendor who had experienced homelessness, but died housed in 2015. He expressed frustration with attending the Homeless Persons’ Memorial Day each year, an event he believes has been needed for “far too long.” 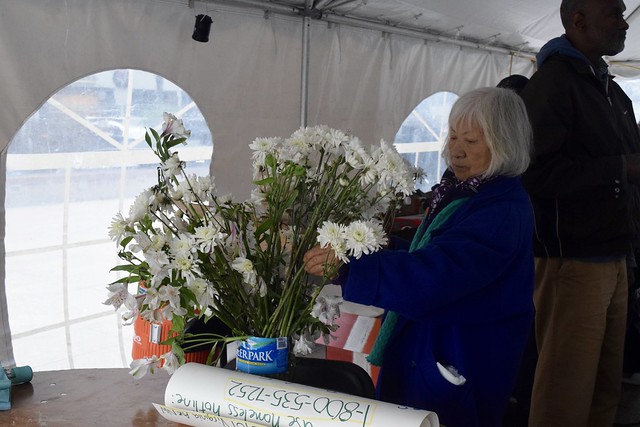 Flowers are prepared to be distributed at the Wilson Building. | Photo by Alexandra Pamias

After the teach-in wrapped up, demonstrators headed to the Wilson Building and delivered roses to the office of each of the council member and to confirm their support of Homeward DC.

The 5-year plan envisions that no one will spend more than 60 days on the streets. It contains different milestones before 2020, such as ending chronic homelessness by 2017. The city is narrowly missing its first milestone: ending veteran homelessness in 2015. According to a December 10 report released by The Way Home Campaign, there are only 213 homeless veterans left in the District.

Demonstrator Orock Ojong thinks that Homeward D.C. is a great idea, but said “2020 is too far away because in the winter we lose people.” She says that ending homelessness should be a top priority in D.C. because people’s lives matter. 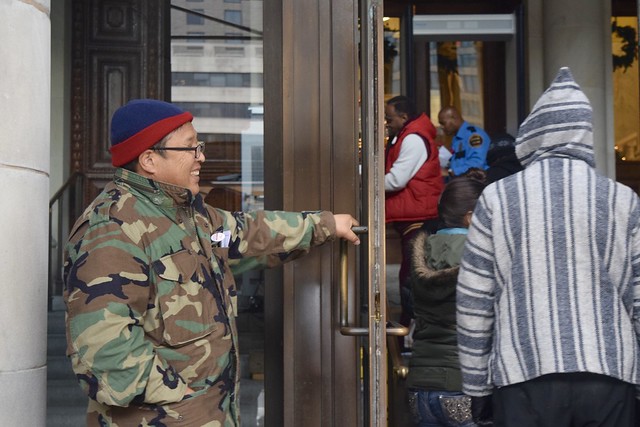 The roses delivered to city council represented the lost lives of the homeless men and women honored in the 2015 vigil. The first rose going was left for Ward 5 Councilmember Kenyan McDuffie, who was not in his office. But the group was able to speak with Shawn Hilgendorf, who said that the council member looks forward to requests from the advocates in 2016. People for Fairness Coalition co-founder Albert Townsend stressed that the group wanted to make sure that McDuffie’s office also looked forward to fully funding the Homeward DC.

The second rose was given to Councilmember-At-Large David Grosso, who fully supports of Homeward DC. “It’s extremely important that you bring this same message to [Mayor Bowser], and we’ve got it in our budget letter that’s going to the Mayor today to support this,” Grosso said to the advocates. “Every year it’s the same, so we’ve got to keep up the fight and I appreciate you all doing this and taking time out of your day to come down here and really spread the word today, so thank you.” 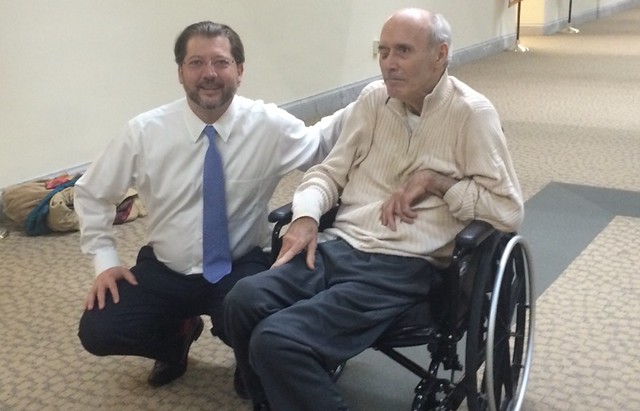 Grosso later processed with the advocates to the afternoon memorial service.

Next came Ward 2 Councilmember Jack Evans’ office. A particular issue of concern while meeting with Councilmember Evans were the Mayor Bowser’s recent homeless encampment sweeps. Evans’ ward has been at the forefront of the closures. An estimated 40 people had battled with both neighbors and city officials to maintain a place they called home under the Whitehurst Freeway, near the Watergate complex.

That area is now completely fenced off. According to Albert Townsend, closing an area that folks call home scatters them and destroys their sense of community. 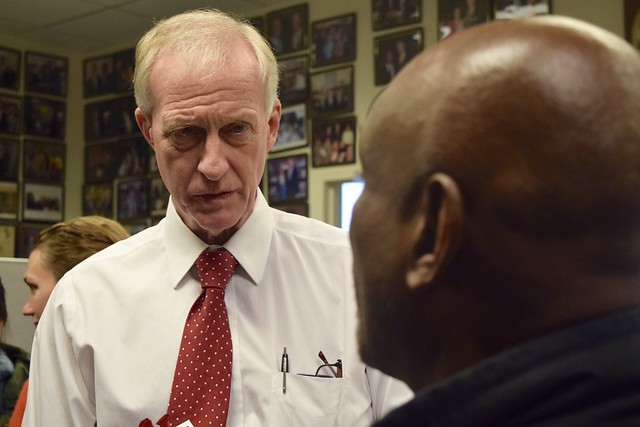 The council member expressed that people who pass encampments are often “scared.”

“Councilmember Evans, it is scary to be homeless,” said Jesse Rabinowitz, an advocacy specialist at Miriam’s Kitchen.

Rabinowitz had discussed the encampment sweeps in detail during the morning teach-in. Many people staying outside are afraid to go into the shelters. Then the sweeps take away the only shelter that they have. The homeless are kicked off the streets and their personal belongings like identification cards and any little money that they have are thrown away, according to Rabinowitz.

“Tents save lives,” he had said to the morning crowd.

Evans, who had previously declined an interview with Street Sense about the Whitehurst encampment, told the visiting advocates that his office will work closely with the Bowser administration to build, “not ‘affordable housing,’ but housing that people can afford.” 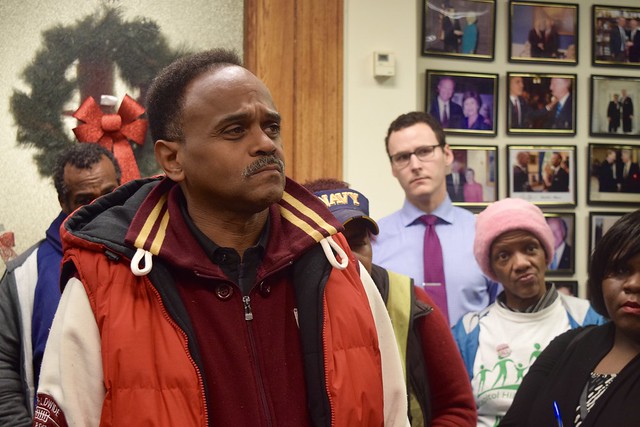 People who are living outside have a lot of issues according to Evans, who believes living under a bridge is not a great idea. Nevertheless, he agreed to work toward an end of Deputy Mayor for Health and Human Services Brenda Donald’s encampment sweeps. The advocates asked Evans to send a letter to the deputy mayor about this issue.

“I don’t have to send a letter, I’ll go and see her,” Evans replied.

He also highlighted the need for a downtown service center in Ward 2 for people experiencing homelessness, but didn’t have any suggestions ready to move this project forward.

The demonstrators left Evans’ office and split into two groups to save time. One group visited At-large Councilmember Anita Bonds, the other went to the mayor’s office. Mayor Bowser was not in her office at the time, but the advocates met in the hallway with Gregory Jackson Jr., Director of the Mayor’s Office of Community Relations and Services.

“The encampment sweeps we are seeing are housing the most visible, not the most vulnerable,” said Kyla Dixon, another Miriam’s Kitchen advocacy specialist, while meeting with Jackson. 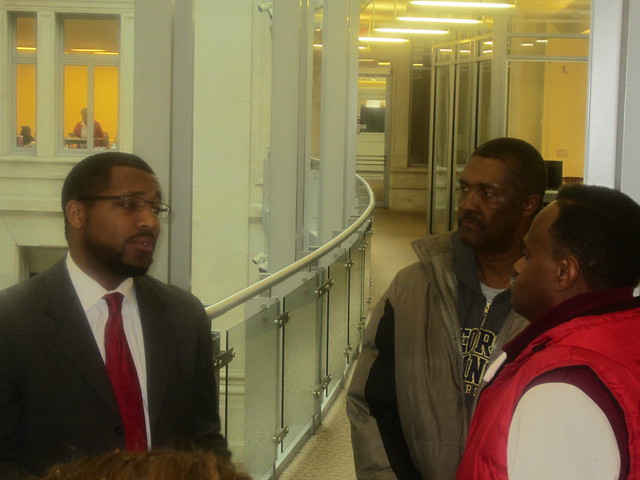 Jackson asked each person to leave their contact information to arrange a meeting with the Mayor at a later time.

“I have a problem with our encampments,” Councilmember Bonds, who chairs the Housing and Economic Development Committee, told the other group that visited her. “I wish we could lease people up, but we can’t. We need to get property owners to agree.”

She believes the community needs to work on sensitizing people to homelessness, and assured the advocates that she supports fully funding the 5-year plan. 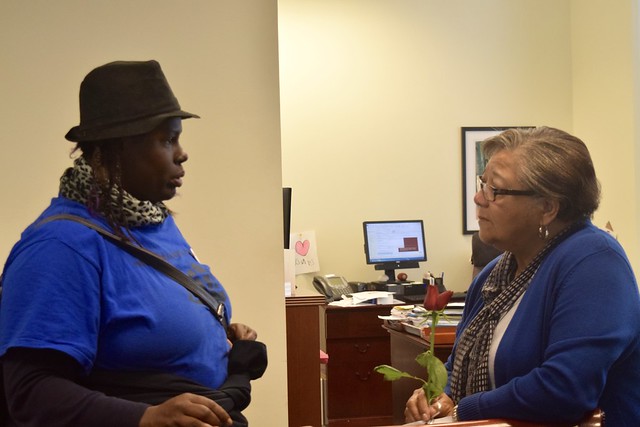 The group next visited Ward 3 Councilmember Mary Cheh’s office and was able to speak with her legislative counsel.

“I thought there was a protocol?” Anthony J. Catalina asked when advocates brought up the removal of the Whitehurst Freeway residents. The demonstrators indicated that they had witnessed the encampment protocol, which was developed by the deputy mayor in August, not being followed. The protocol includes a stipulation for not taking away items that may save a life from people in encampments.

“We’ve got a long way to go,” Catalina said, urging the group to continue its efforts and make regular visits to the council. He said that Cheh’s office is also looking into the issues of public restrooms.
Demonstrators then ran into Council Chairman Phil Mendelson in the hall as he headed to his office. 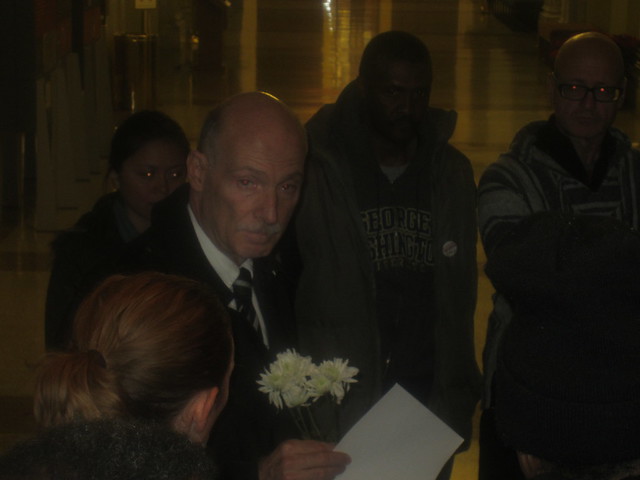 Mendelson stated that he didn’t like the encampment sweeps. When asked if the homeless campers could be entered into the coordinated entry list that assesses need and determines housing placement based on that need, Mendelson stated that he did not know the specifics of how the assessment system worked, but that “the people who are being swept are being bumped in the system.”

Once the roses were distributed, demonstrators marched to New York Avenue Presbyterian Church. After a brief lunch, the overnight vigil culminated in a memorial service that began with a special prayer for the 42 District residents, 11 northern Virginia residents, and countless unnamed persons who died while experiencing homelessness in 2015, and for those who are still alive out on the streets. 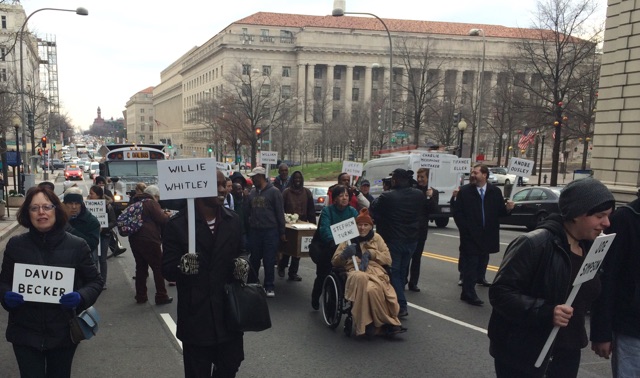 Tadesse Dinku gave a short reflection on his life as a torture survivor. “I was tortured in Ethiopia for ten days because I opposed the ruling party there,” Pinka, who was subsequently homeless in D.C., said. “Now I am in a survivors’ house. I have my own bed and share friendship with other men.” Next was Rev. Ashley Goff of Church of the Pilgrim, who said that “everyone deserves to be called by name” and that is one of the reasons for having the vigil. Matthew Doherty, Executive Director of the U.S. Interagency Council on Homelessness, said that people experiencing homelessness need housing that will provide safety and a permanent home in our neighborhood. 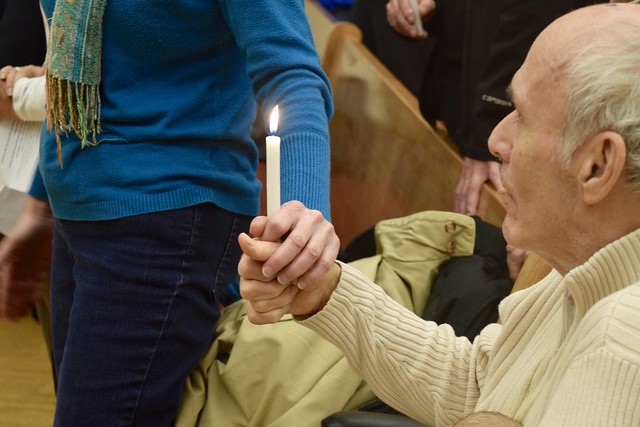 “Every one of these names is a call to action to our resolve that no one should be homeless,” Doherty said. “We know that people need housing first. Housing that offers people the rights and dignity that they deserve. We are proving every day that we can end homelessness. We must never allow ourselves to forget that our homeless neighbors are vulnerable every day.”

The memorial service was extra momentous because it was the first time anyone has seen long-time advocate and community organizer for the National Coalition of the Homeless Michael Stoops. Earlier this year Stoops suffered a severe stroke that left him virtually incapacitated.

Patty Fugere, Julie Turner, Michael Stoops and other memorial service attendees hold lighted candles to remember the lives of men and women who died while experiencing homelessness in 2015. | Photo by Ken Martin.

“We would not be remembering these people who died on the streets if it was not for your decision to honor those who passed on without a home,” said Robert Warren to the assembled crowd. “You helped us to raise our voices, we are all grateful to you Michael.”

Today Stoops participated in the marches and memorial service in his wheelchair. He could share a meal and communicate, which were welcome signs of his recovery for those gathered at the service. 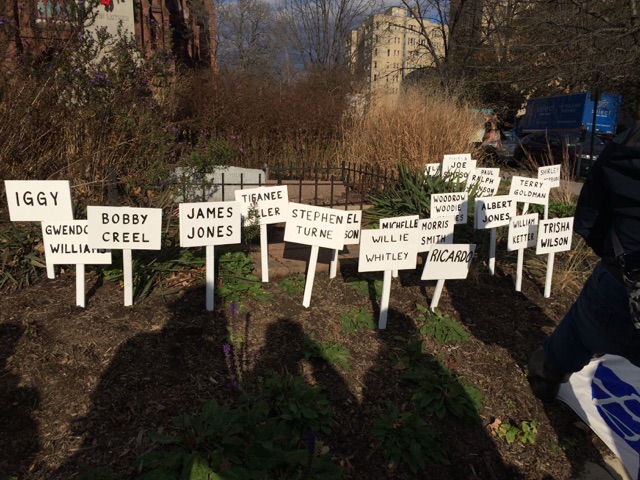 The ceremony ended with the lighting of candles in memory of the 53 District and Northern Virginia residents who passed away unhoused in 2015. The core demonstrators then ended the day by laying the placards bearing names of those who had died to rest at the symbolic grave of historic homeless advocate Mitch Snyder. This year marked the third year the People for Fairness Coalition has marched for those who have passed “without the dignity of a home.” It was the hope of everyone in attendance that someday, deaths of people experiencing homelessness will end once and for all.